In a move telegraphed for over a month, Vanguard Natural Resources, LLC slashes its dividend so it can live to fight another day.

After a month and a half of sleepless nights, Vanguard Natural Resources, LLC (NASDAQ: VNR) CFO Richard Robert should finally sleep soundly tonight after his company announced it was reducing its distribution by 44%. After seeing fellow upstream MLPs LINN Energy LLC (LINEQ) and BreitBurn Energy Partners L.P. (BBEPQ) slash their payouts by about 50% earlier in the year, Robert told The Wall Street Journal that they were "doing something drastic now in order to fight another day."

He then went on to say that a distribution cut might "ultimately be the prudent things for us to do, at least you sleep better at night." So, after careful consideration, and likely a lot of sleepless nights, the company has come up with a payout it believes is sustainable for at least the next two years. However, this cut is more than just a cure for insomnia.

Fixing two problems at once
Heading into 2015, Vanguard Natural Resources set three goals that it wanted to accomplish this year in order to address issues that cropped up when the price of oil collapsed. Those goals are detailed on the following slide. 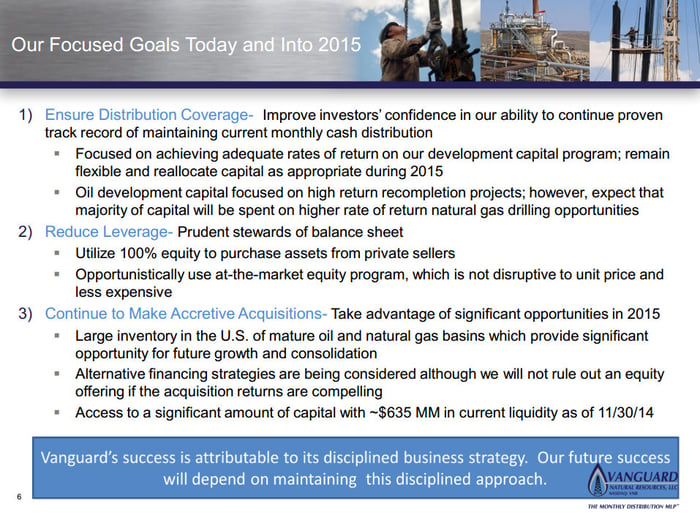 By resetting the company's distribution at its new rate, the company has, in a sense, put itself in a position to achieve all three goals. That's summed up in the statement CEO Scott Smith made in the company's press release announcing the cut:

The difficult, but necessary, decision to reduce our common unit distribution was made to address the economic headwinds we face as a result of the dramatic collapse in commodity prices over the past several months. At the current strip price for oil, natural gas, and natural gas liquids, we were faced with having to borrow on our credit facility to maintain distributions or reset the distribution level in order to preserve our liquidity for potential future acquisition opportunities in this low commodity price environment. We believe that our unitholders will be better served long-term by a more conservative approach which maintains our liquidity and enhances our ability to be competitive in an acquisition market, which should present opportunities to acquire quality assets at favorable prices.

By resetting its distribution rate, Smith is noting that Vanguard needed to make this move in order to secure a stronger long-term future for the company. This is now more likely because the distribution is on a much more sustainable pace, as the company sees its distribution coverage ratio at 1.24 times in 2015 and 1.2 times next year at the mid-point of its guidance.

So, by having a robust coverage ratio like that, the company will ensure it doesn't take on more debt just to pay its investors. Instead, it can use its expected excess cash to strengthen its balance sheet, which should put it in a position to take advantage of the current weak commodity price environment as it can acquire assets at what Smith calls "favorable prices."

Gearing up to accomplish goal No. 3
As the CEO notes, the company is looking forward to being able to take advantage of the weak commodity price environment to bolster its business for the long term. That's because MLPs like Vanguard achieve most of their growth by acquiring oil and gas assets. So, by ensuring it has the credit bandwidth to go on the offensive, the company can position itself so that it won't miss an opportunity that comes its way.

Investor takeaway
That's really why upstream MLPs like Vanguard, LINN, and BreitBurn are making distribution cuts. All three see an enormous opportunity to buy oil and gas assets at what could be fantastic prices for long-term investors. None of the three companies want to miss out on these opportunities, so all three are willing to make a sacrifice today in order to be in the best position to take advantage of what looks like it will be one of the best buyers markets in years.

So, while the distribution cuts will help the management teams of all three sleep better at night, knowing they won't have to borrow to pay their investors, that doesn't mean the teams won't be burning the midnight oil looking for their next big purchases.