What: Oil and gas industry pipe, valve, and fitting supplier MRC Global (NYSE:MRC) saw its stock fall as much as 11% in early trading Friday. As of 1:25 p.m. EST, it has gained back some of that early loss, but remained down more than 7%. Much like essentially every other company tied to the oil and gas business, MRC Global's stock is well off its 2014 peak: 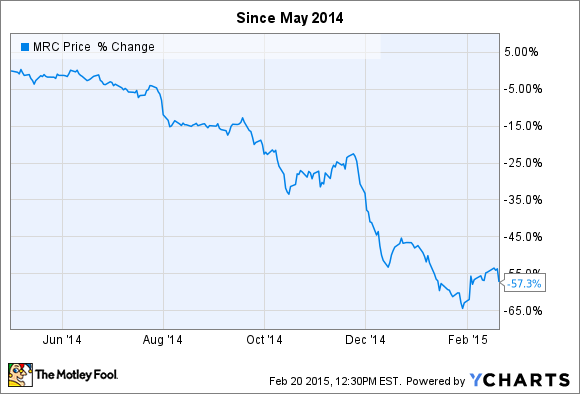 So what: MRC Global reported earnings after the market close on Thursday, and came up short of analyst expectations, with adjusted earnings per share of $0.33 falling well below the $0.46 Mr. Market was counting on. The company also expects 2015 to be a tough year for its upstream business.

Now what: The biggest concern with MRC Global is definitely the weakness in upstream for the foreseeable future. For those not in the know, upstream is essentially the exploration and production side of the oil and gas business, and there will be significantly less new drilling activity in 2015, as producers cut back on their output. This is a real negative for MRC, but isn't the end of the world, as the company also supplies the midstream segment, which largely encompasses pipelines for distribution of gas and oil products, along with storage facilities.

This segment isn't likely to suffer to the same extent in 2015 -- to the contrary, there should be some growth as more pipelines are needed to connect production centers to demand centers. However, it's not clear how much MRC Global will benefit from this upside, and management is expecting it will have lower sales in 2015 than 2014. If you're looking to invest in companies that service the oil and gas industry, MRC Global probably would not be my first choice.