In the past few years, retail giant Walmart (NYSE:WMT) has discovered that sticking to the same old script isn't working anymore. Prior to the Great Recession, Walmart was clearly a growth company despite its massive size, with a high single-digit annual growth rate. More recently, it has struggled to eke out low-single digit revenue growth. 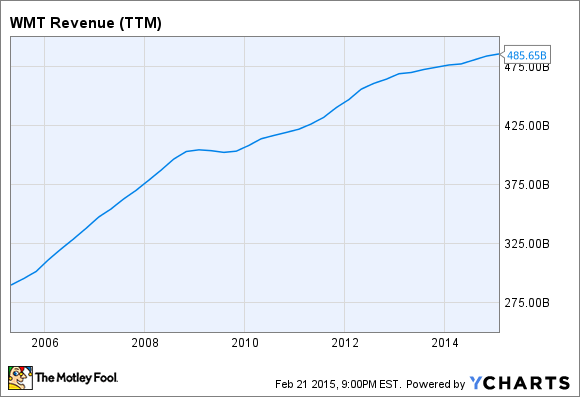 Under the leadership of previous CEO Mike Duke, Walmart began to experiment with changes to its business model, such as adding more small-format stores. However, these efforts were still too little to turn the tide.

New CEO Doug McMillon has shown that he will be more aggressive about making investments to restart Walmart's growth. He is doubling down on existing initiatives to add small-format stores and grow Walmart's e-commerce presence. Most notably, he is raising pay for half a million employees in a bold bid to improve Walmart's lagging customer service.

Another weak year
Walmart's profit growth has stagnated lately. In the recently ended 2015 fiscal year, Walmart's "underlying" EPS -- which excludes unusual gains and losses -- was $5.07. That represented a slight decline from Walmart's fiscal year 2014 underlying EPS of $5.11 and fell short of the company's original guidance for EPS of $5.10-$5.45.

Fiscal year 2015 was the second straight year of earnings stagnation. In fiscal year 2014, underlying EPS rose 2%, and even that was just a function of share buybacks.

Boosting wages
While the Neighborhood Markets represent an important new growth outlet for Walmart, the company still gets the vast majority of its revenue from supercenters, and that will continue to be the case for the foreseeable future.

Poor customer service in these supercenters has contributed to Walmart's sluggish sales growth. (Walmart ranked at the bottom of the American Customer Satisfaction Index in 2014.) Walmart's efforts to juice profit growth by cutting costs to the bone in previous years caused it to have fewer and less-motivated employees in stores. This backfired as the company lost sales to dollar stores and other discounters.

Walmart began to reverse its stingy attitude last year by keeping more registers open during the holiday season in order to keep lines short. Walmart announced on its earnings call that it has continued this "Checkout Promise" policy during Q1.

In an even bigger break from the status quo, Walmart announced that it will raise wages for about half a million hourly employees in the U.S. In April, Walmart will raise its entry wage to $9/hour, and by next February all current employees will make at least $10/hour. (New hires may still start at $9, but after completing six months of training, they will move up to $10/hour.)

Department managers and other employees who are making more than $10/hour today will also be eligible for raises under this program. Walmart is also changing its scheduling practices to help employees to get more consistent hours and it is making it easier to use paid sick days.

Lastly, Walmart is creating a training program to help employees move to jobs with more responsibility. It wants to create clear career paths so that entry-level workers understand how they can move up the ranks over time.

How higher pay could help
Raising employee pay could be transformative by re-energizing the Walmart workforce. More engaged employees are likely to provide better customer service, which should draw more customers to Walmart in the long run. Furthermore, if workers feel more "invested" in Walmart, they will be more likely to suggest process improvements that could improve profitability.

Paying higher wages should also allow Walmart to be more selective in its hiring, improving the quality and productivity of its workforce over time. Improving long-term career mobility could also encourage Walmart employees to stick around. Lower employee turnover reduces training costs.

As a side benefit, by paying its employees higher wages, Walmart could also put upward pressure on wages at comparable employers. That would put more money in the hands of Walmart's core customer demographic.

Even with its planned wage increases, Walmart will still be paying significantly less than one key rival: Costco Wholesale. Whereas Walmart is touting the ability of entry-level workers to eventually move up to positions paying $15/hour or more, the average hourly wage at Costco is more than $20/hour.

This is both a positive and a negative. On the one hand, it means that Walmart probably needs to keep raising wages to attract and retain high-quality employees. (Otherwise, it might lose its best workers to Costco.) On the other hand, Costco's experience shows that paying good wages is compatible with maintaining a low-cost model.

This will take time
In the long run, Walmart's strategic initiatives could help it return to faster growth. By opening more Neighborhood Markets, it will be able to tap into a huge market of customers who don't want to navigate a gigantic Walmart supercenter to pick up a few groceries.

By paying its employees more, Walmart may be able to improve its customer service while also contributing to higher working class incomes more broadly. Both trends could drive better sales growth.

Nevertheless, Walmart investors will have to be very patient. Walmart is projecting another EPS decline for this year, primarily due to the $1 billion cost of raising employee compensation. Since there will be another step-up in wages next February, EPS will probably remain depressed in fiscal year 2017.

Still, if paying more can drive a return to sustainable comparable sales growth, Walmart should be able to gradually leverage the additional costs. (To some extent, the cost headwinds could also be offset by higher employee retention and improving productivity over the next few years.)

As a result, Walmart's willingness to spend a little more today to reinvigorate sales growth won't necessarily hurt its long-term cost structure. There can be no assurance of success, but this seems like a much more promising strategy than Walmart's previous fixation on cost-cutting.