Investors in Alaska Air Group, (NYSE:ALK) can't exactly complain about the company's recent stock performance. Alaska shares have nearly tripled since the beginning of 2013. Yet even with that gain, Alaska Air's stock gains still lag those of its larger rival (and nemesis), Delta Air Lines (NYSE:DAL). 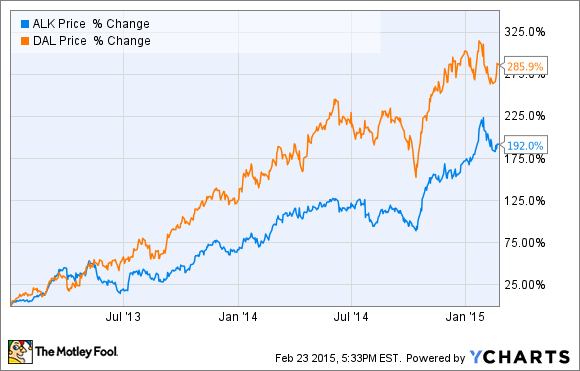 However, Alaska shares may finally be ready to outperform even other top-notch airline stocks. Alaska Airlines is pursuing a combination of growth and cost reduction that makes it a fairly compelling investment opportunity given that Alaska stock trades for just 10 times projected 2015 earnings.

Fighting off competition
The main reason that Alaska stock has lagged some other airline stocks is that Delta has been rapidly invading Alaska's main hub market of Seattle. A year ago, Delta operated a mere 35 daily departures at Seattle-Tacoma International Airport.

Today, Delta has more than doubled its presence in Seattle and offers 85 daily departures. Furthermore, the company has already announced service additions for the next few months, which will bring it to 126 daily departures to 35 destinations by this summer.

Delta has grown rapidly in Seattle in the past year.

Despite all this growth from Delta, Alaska remains the top dog in Seattle. It is currently in the midst of expanding its schedule in Seattle to 280 daily departures, and it serves more than twice as many destinations nonstop from Seattle as Delta.

Costs are falling more rapidly
Alaska's revenue headwinds could send some investors heading for the exits. (In fact, Alaska Air stock has declined about 10% in the last month.)

However, the unit revenue declines are being more than offset by lower costs. In a guidance update earlier this month, Alaska's management projected that full-year non-fuel unit costs will decline 0.5%.

Fuel expense will also decline dramatically, barring a sudden rebound in oil prices. For Q1 specifically, Alaska is projecting an average economic fuel cost of $1.97 per gallon. That would be down about 40% year over year. Alaska's fuel efficiency is also improving as the company replaces its older Boeing 737s with new, fuel-efficient 737-900ERs.

The net result is that Alaska will probably improve upon its 2014 pre-tax margin of 17%, which was already one of the best in the industry. It will do so while also growing capacity about 9.5%, driving solid revenue growth.

Unit revenue pressures will ease
Alaska Air's potential to continue expanding its profit margin this year is a key part of the bull case for the stock. That said, it's important to acknowledge that lower fuel costs are the main driver of this margin growth. But oil prices are volatile, and jet fuel prices could jump back to $3 per gallon in a hurry if OPEC changes its policy or political instability disrupts oil production.

Fortunately, there are other reasons to like the long-term outlook for Alaska Airlines. First, Delta's growth in Seattle (which has been the primary cause of Alaska's unit revenue pressure) may tail off after 2015. Delta has previously indicated that its ultimate goal is to operate about 150 daily departures in Seattle. That would be just 20% more than the summer 2015 schedule.

In December, one top Delta executive stated that the carrier was about 70% toward its goal in Seattle. This would imply a slightly higher target of perhaps 180 daily departures -- which would also line up with Delta's request for access to 30 gates in Seattle.

Either way, the implication is that by the end of 2015, Alaska will have gotten past the worst of the Delta onslaught. In the years ahead, unit revenue may recover somewhat as the heightened competition between Alaska and Delta stimulates new demand.

Alaska isn't waiting around for Delta to slow its growth, though. It has been rolling out a variety of revenue initiatives in the past year or so, such as increasing bag fees and adding seats to some planes.

In 2015, it will launch its newest initiative: preferred seats. Alaska is currently one of the last airline holdouts without some type of "premium economy" product, but that's about to change. Alaska estimates that its preferred seats will bring in an incremental $15 million in 2015. Based on the experiences of other airlines, the long-term revenue impact could be much bigger.

Meanwhile, it will continue to reduce non-fuel unit costs and improve fuel efficiency by focusing on productivity and replacing its oldest planes with new models. As investors grow more comfortable about the sustainability of Alaska's success, its stock could move significantly higher.