What's Happening: Leading natural gas for transportation fuel provider Clean Energy Fuels Corp (NASDAQ:CLNE) is on fire Friday, up 15.7% at 11:15 a.m. EST. Since the end of January, the stock is up a lot more: 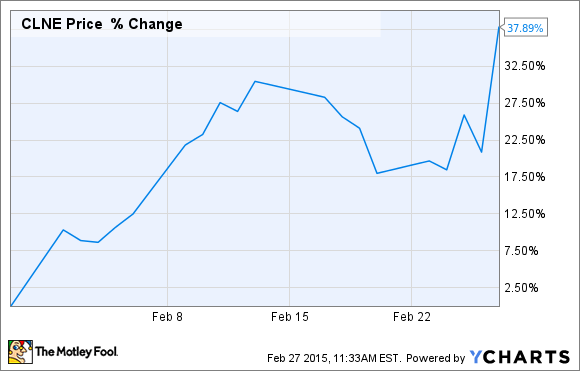 Why It's Happening: In short, the company's earnings report came in much better than expected, with the company reporting a net profit in the fourth quarter, and actually accelerating fuel sales while oil prices plummeted. This is a big deal since it actually competes against the price of gasoline and diesel. Maybe most impressive was the fact that fuel sales increased 33% in the fourth quarter, a big jump from the roughly 20% volume increases the company has managed for most of the past few years. The company also reported a significant reduction in capital expenditures for 2015, reduced debt, and reduced operations expense. These will combine to help the company reduce its cash burn over the next year. With $150 million in debt coming due in 2016, that's an important move.

There's also a good chance that we are seeing a bit of a "short squeeze" as well. Shares sold short has trended down over the past year, but at 17% of shares last week, it is still very high. Friday's jump could be fueled by short sellers trying to cover their positions.

Is the stock a buy today? I think it is. Not only is the company growing at better than 20% annually, it's orders of magnitude are larger than its nearest competitor, and it just reported big improvements in its cost structure. Looking for more details? Check out my in-depth earnings write-up here.