Please ensure Javascript is enabled for purposes of website accessibility
Log In Help Join The Motley Fool
Free Article Join Over 1 Million Premium Members And Get More In-Depth Stock Guidance and Research
By Rich Duprey - Mar 2, 2015 at 9:04AM

Cold drinks are a big opportunity, but there are good reasons why the coffee maker could fail to see sales heat up.

The maturation of the single-serve coffee market has Keurig Green Mountain (GMCR.DL) turning its attention to cold beverages and it recently unveiled its new machine for crafting sodas, teas, and sparkling waters at home.

Since the cold drinks market dwarfs hot drinks by a five-to-one margin, the coffee maker is betting the new Keurig Kold machine will capitalize on the opportunity and its partnership with Coca-Cola (KO 1.88%) will reignite sales. Yet there's a flaw in the plan and it could cause all of Keurig Green Mountain's efforts to come to naught.

Running hot and cold
Citing data from market research firm IRI, Keurig's presentation to Wall Street analysts earlier this month noted the addressable cold beverage market is worth some $50 billion in annual sales, or five times the size of hot beverages, which generated around $10 billion in sales last year. 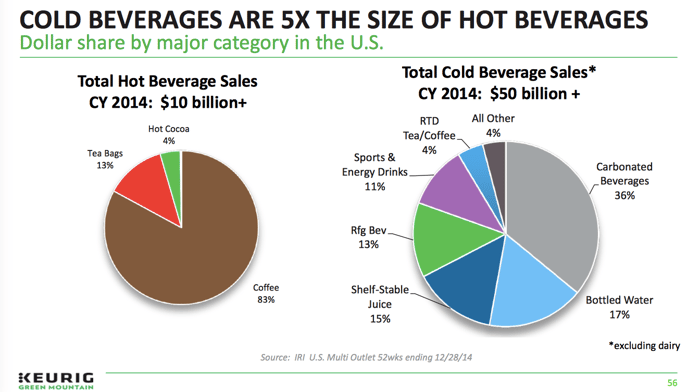 The Keurig Kold system, the new counter-top appliance that uses the coffee maker's pod-based technology, aims to tap into that market when launched later this year by offering five key benefits:

The same but different
There do seem to be benefits to the Keurig model that could give it a competitive advantage over industry leader SodaStream International (SODA). The lack of a CO2 canister, for example, would be a big plus for those bothered by having to return carbonation units for refills, but since Keurig hasn't revealed just how the fizz will be added to its beverages, it's still an unquantifiable edge.

However, Keurig's branding with Coca-Cola, which took a 16% stake in the coffee maker last year, lends itself to giving consumers a sense of product consistency. Brands tend to want an easily replicable process so that consumers are assured of quality no matter where they go. SodaStream has called such dependability a "trap," and instead prefers variability that comes through "inexact dosing."

SodaStream is also trialing a branding partnership with PepsiCo (PEP 1.24%), but early reports suggest there remains uncertainty over how successful it is and whether it will expand beyond the three test markets it's currently in.

Personalization is important, but maybe not when you're trying to sell a machine as delivering a Coke or Pepsi at home. Still, Keurig has a number of brands now in its portfolio, and last month also signed up DrPepper Snapple Group (DPS), lending credence to the idea its pods can deliver true-to-type flavor.

A big fish in a smaller pond
Yet the biggest hurdle for Keurig Green Mountain to surmount before it can succeed in the cold beverage market is the DIY niche its targeting may have already been saturated by SodaStream while the overall market for soda is in decline.

SodaStream sales are in free fall with starter kits plunging 34% last quarter and flavoring sales tumbling 38%. While CO2 units posted a 17% gain year over year, that's only half the 34% rise in sales it enjoyed in the third quarter of 2013, its peak sales period. 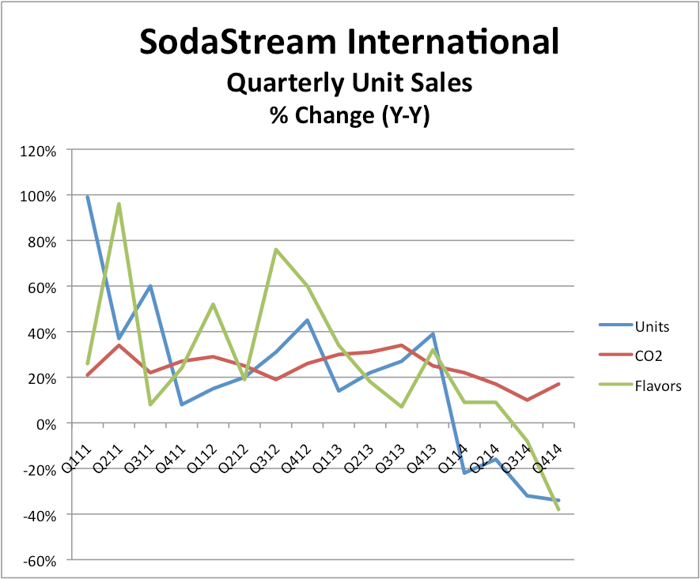 That could be because soda sales in general are in decline. Carbonated cola volumes in the U.S. tumbled from 28 billion liters in 2009 to 24.7 billion liters in 2013, according to the market researchers at Euromonitor, which is underscored by the continued erosion in volumes at both Coke and Pepsi. Worse has been the collapse in diet soda sales as concern escalates over the use of artificial sweeteners.

Diet soda sales are losing even more of their fizz than regular soda. Data: Beverage Digest

With soda being a market in decline, and one that's already heavily serviced by a limp SodaStream, a new machine coming to market has little apparent chance of making a big impact. Even with teas and sparkling waters, it's a very limited space.

A chilly reception
I've already said I think there's a bigger market in at-home adult beverage machines, a niche two new upstarts are trying to corner, and perhaps Keurig should considered buying one of them. But it just doesn't appear cold drinks will be heating up the coffee maker's bottom line.

For investors, this means that Keurig Green Mountain stock may not regain the record highs it hit late last year. No doubt the coffee maker has proved resilient beyond the expectations of its critics, but this foray into a new market could leave it frozen out in the end.