If you were to rank the threats to tech giant Apple's (NASDAQ:AAPL) business empire, names of other tech powers like Google and Samsung would be the obvious choices.

I'm fairly confident the phrase "flip phone" wouldn't appear anywhere close to the top of this list. However, in a confounding but somewhat entertaining twist, a recent resurgence in flip phones in one of Apple's largest markets has some worried about its potential impact on Apple's iPhone empire.

This is not a joke.

Japan's smartphone market goes retro
Japan is one of the most technologically advanced economies in the world. So you might think flip phones -- also referred to colloquially as "clamshell" phones -- would have gone the way of the dodo years ago. However, there's actually a relatively large and, more importantly, growing market for these clamshell phones in Japan.

A major part of the flip phone's ability to survive in Japan has been manufacturers' ability to integrate much of the functionality of today's smartphones, albeit in a strikingly antiquated form factor. In fact, Japanese flip phones have evolved so adeptly that they've gained another telling nickname -- "Galapagos" phones -- for their uncanny ability to evolve over time. So, could this baffling trend actually threaten Apple's seemingly invincible iPhone franchise?

What it means for Apple
The answer here is a bit nuanced. On one hand, it's pretty evident that the flip phone trend in Japan, improbable and counterintuitive as it might seem to an outsider, has tapped into a very real consumer preference. It's hard to argue otherwise, as shipments have surged amid the context of a broader decline in the Japanese smartphone market. To the extent that the market and consumer tastes might be evolving away from smartphones and toward these clamshell devices, well, that's a threat to the iPhone's longer term success in the Japanese smartphone space.

On the other hand, it's important to put this growing consumer preference into context. In terms of the Japanese smartphone market, Apple still absolutely dominates the scene. 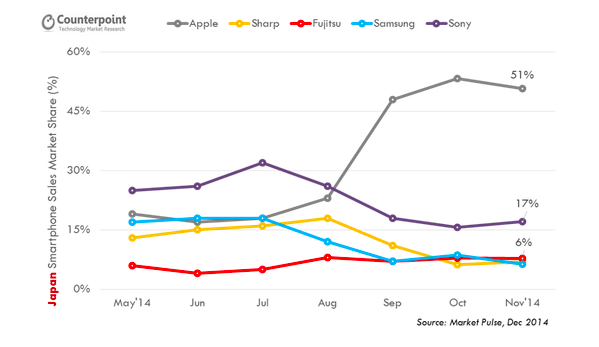 As you can see, thanks to the tremendous popularity of the iPhone 6 and 6 Plus, Apple has become the leader in the Japanese smartphone market by a cavernous margin. Using some back-of-the-envelope math, if you apply the same 50% market share rate seen above for Apple's iPhone business to the 27.7 million Japanese smartphone shipments last year, it implies Apple sold around 13.8 million iPhones in Japan last year compared to the 10.6 million clamshell phone sales.

Obviously, this is far from exact and Apple doesn't disclose specific geographic device unit shipment figures. But despite its imprecision, it at least helps contextualize the competitive landscape between Apple and these flip phone manufacturers.

It's also important to note how Japan relates to Apple's overall financial performance. In Apple's most recent earnings report, Japan accounted for 7% of its total sales, a percentage it has consistently hovered near in each of Apple's last three fiscal years as well. So, as a single country, Japan certainly produces an impressive amount of revenue for Apple and its investors each year.

However, as large emerging markets like India and especially China grow to comprise a larger percentage of Apple sales in the decades ahead, this is the kind of story line that isn't worth unduly worrying about. Real, odd, and even funny? Absolutely. Anything more than that? Probably not. Every once in a while, a story so bizarre comes along that you simply can't help but comment, and that's how I think this "flip phone revival" topic deserves to be treated here.

Should Apple Be Worried About the "Flip Phone Revival" in This Key Market? @themotleyfool #stocks $AAPL Next Article
Current