Microsoft (NASDAQ:MSFT) could soon buy "social news reader" app Prismatic for about $30 million, according to a recent TechCrunch report. Prismatic recommends articles based on users' interests, what their friends are reading, and how they interact with the stories it suggests.

However, Microsoft has quietly beefed up its social networking capabilities over the past few years. In 2012, it acquired Yammer, an enterprise social networking service, and launched Socl, a Pinterest-like site that links to Microsoft and Facebook accounts. Last year, Microsoft invested in Inlope, an interest and location-based social networking app. The application lets users subscribe to various news categories, then read recommended articles suggested by individuals located in their neighborhood.

Those social networks are minuscule compared to their first-tier counterparts, but they represent pieces of a puzzle that could be unified under a concrete strategy. With Prismatic's socially recommended articles, Microsoft could get another piece of the puzzle to complement Socl and Inlope.

Let's put these pieces together to see where Microsoft's social networking plans are headed, and whether Facebook and other major players should worry. 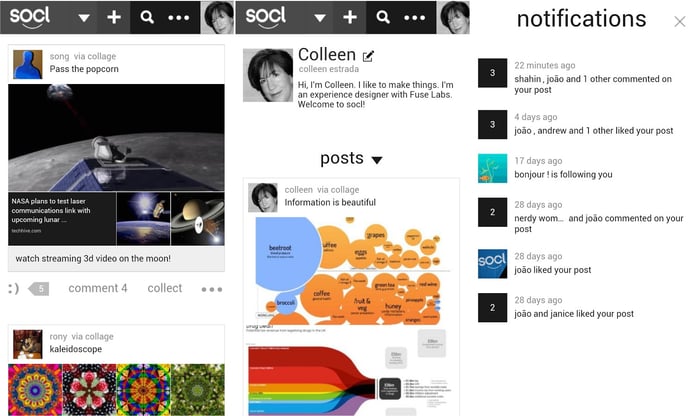 Why Microsoft needs a social backbone
Today, Facebook, Google, and Twitter are waging war across the Internet with single sign-ons, or SSOs, which are quickly replacing traditional logins for apps and websites. SSOs are important for two reasons. First, they replace old-fashioned cookies, which can't track user behavior between PCs and mobile devices. Second, SSOs tether users to sprawling ecosystems, which Facebook, Google, and Twitter all need to craft targeted ads.

In a previous article, I pointed out that users are inclined to connect apps and sites to the social network they most frequently use. Since Microsoft lacks a major social networking presence, there's no reason to sign into external sites and apps with a Microsoft account instead of a Facebook one. That's why Microsoft's own SSO remains mainly confined within its internal sites.

If Microsoft eventually combines the best features of Socl, Yammer, and Prismatic into a unified MSN or Bing-branded social network, it could spread consumer-facing SSOs to other third-party sites and apps, and possibly turn ad revenue into a new pillar of growth. Microsoft currently tucks search advertising into its D&C Other segment, which only accounted for 8.5% of the company's revenue in the first half of fiscal 2015.

Is Prismatic a lemon or a hidden gem?
Unfortunately, Prismatic is a fading star. According to App Annie, Prismatic debuted as a top 10 iPhone app two years ago. Today, it ranks 758th overall and 154th among U.S. news apps. Prismatic arrived on Android last year, but the app has only been installed 5,000 to 10,000 times. Therefore, it seems odd that Microsoft, Apple, Google, and Facebook would be interested in buying such a tiny app.

However, Prismatic can also be used for non-social networking purposes, such as improving personalized article selections on MSN or enhancing Bing search results. Microsoft's previous acquisition strategies suggest it will likely integrate Prismatic's features into existing services instead of promoting the stand-alone app. Last year, Microsoft acquired Acompli, a popular email service for iOS, and then relaunched the app as a rebranded Outlook app for iOS. In February, it acquired Sunrise, one of the most popular calendar apps for iOS and Android, which might be integrated into Outlook as well.

The verdict
A $30 million payout is pocket change for Microsoft, which reported $26.5 billion in revenue last quarter. However, investors should keep an eye on Prismatic and Microsoft's other recent acquisitions, which hint at a strong desire to expand its social networking features. It's unclear if Microsoft will unite these services under a single social network or use them to enhance its existing products, but both strategies could improve its position against fast-moving peers such as Facebook and Google.

I doubt Prismatic, Yammer, and Socl will help Microsoft challenge Facebook, LinkedIn, or even Google+ right away, but it will be interesting to see how Microsoft puts together these pieces of its social networking puzzle.