Our three picks for this week include a pair of companies hiking their payouts at double-digit rates.

Last week was another solid one for dividend raises. Nearly all major sectors of the economy were represented -- a very encouraging sign -- and more than a few of those hikes were well in double-digit percentage territory.

It was hard to choose only three for this digest, but it's nice to be spoiled for choice. Our trio of raisers for this week leans toward the more industrial side of things, with a company that specializes in trash, the nation's most prominent home improvement retailer, and a self-described "global science and technology innovator" conglomerate.

The envelope, please. Our three chosen dividend boosters are:

Home Depot (HD -2.17%)
The boards are being nailed and the bolts tightened as America's king of home improvement supplies builds a big addition to its dividend. The company has declared a fresh quarterly payout of $0.59 per share, a robust 26% higher than its predecessor.

Home Depot is riding a wave of home building and remodeling just now, a strong tailwind that helped it blow past analyst estimates for earnings and revenue in its recently reported Q4. Both have been increasing impressively over the past few years on a trailing 12-month basis. 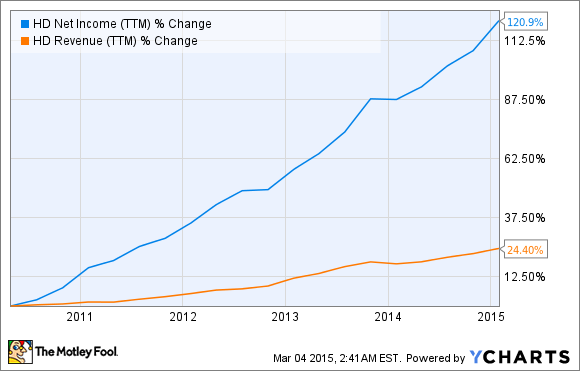 Can the good times last, though? The company seems to think so; it's guiding growth in both sales and per-share earnings for fiscal 2015 -- 3.5% to 4.7% for the former, and 8.5% to 10% for the latter... and this despite the strong dollar, which negatively affects business from abroad.

The big concern is, naturally, the state of the housing market, as this directly and profoundly affects Home Depot's operations. It seems to me the current growth cycle for home building/renovating still has some room to run, so I think the company's growth projections are realistic. Investors should keep an eye on how these macroeconomic factors develop, though.

As for the dividend, Home Depot has historically managed its payout regime well, keeping its free cash flow positive, and ensuring there's more than enough to pay the distribution -- which for the third time running it's raised at the beginning of the year. Based on its history and its projected growth, it looks like things could remain good for Home Depot shareholders.

The company's new payout will be dispensed on March 26 to shareholders of record as of March 12.

Waste Management (WM 0.24%)
One person's trash is another's dividend, at least in the case of this well capitalized waste hauler. The company just enacted the latest in a series of $0.01 raises in its quarterly payout. The latest shakes out to nearly $0.39 per share, or 3% higher than the previous distribution.

Waste Management is the largest garbage hauler in America, and given the size of this country and the amount of stuff it throws out, that's really saying something. The company's done a fine job of diversifying into every imaginable corner of the business.

That's broadened the revenue base, which has grown slowly but steadily over the years. Bottom line has been rather choppy recently thanks to restructuring activities that have seen the firm cut costs and sell assets. Still, it came in more than 10% above the average analyst estimate in its Q4.

And its fiscal 2015 EPS projection of $2.48 to $2.55 looks encouraging next to what the $2.48 the market had been expecting. Waste Management's restructuring efforts, which have left it a slimmer and more streamlined firm, should have a positive effect on its finances going forward.

The challenge for any company of Waste Management's size is finding the right efficiencies through those restructuring efforts, while still building its business. Going forward, we'll see how well it manages to do this. Personally,I think it'll do fine, since it's proven to be a steady money earner even in tough, lower-consuming economic times.

Meanwhile,  it shares its proceeds in the form of regular dividend payments that are lifted frequently (if cautiously). Its annual free cash flow figure regularly tops $1 billion, which is more than enough to pay its distribution. I wouldn't worry too much about the sustainability of this dividend. 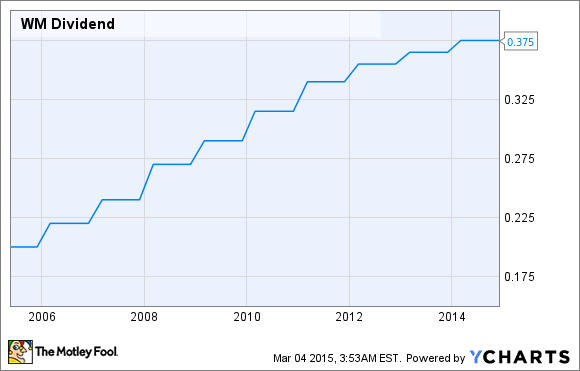 Waste Management's upcoming distribution is to be paid on March 20 to stockholders of record as of March 9.

Danaher (DHR -0.61%)
This company is a conglomerate that specializes in acquiring manufacturers of niche technologies across various industrial segments such as environmental science and medical devices. Its recent 35% hike in its quarterly payout (to nearly $0.14 per share) was comparatively modest. After all, Danaher had cranked it 300% higher at nearly this time last year.

Utilizing its "Danaher Business System" -- basically a set of principles aimed at keeping manufacturing processes lean, and returns high in its portfolio companies – the firm has recorded strong growth in revenue and bottom line over the years. Fiscal 2014 saw an 8% increase in adjusted net profit (to $2.6 billion, or $3.63 per share), on the back of a 4% rise in revenue (to just under $20 billion). 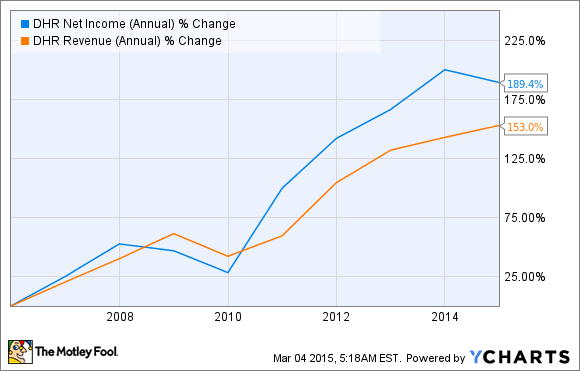 Much of Danaher's growth is fueled by acquisitions, so much of its future success will depend on whether it's able to nab good assets at reasonable prices. That's more challenging these days given the strength of the stock market and the growing prominence of private equity operators, which are always sniffing around for good investments.

But Danaher has decades of experience going for it, so although this might be more of a challenge than it's been in the past, I feel it should still be able to find suitable turnaround candidates for its portfolio.

Meanwhile, its free cash flow has risen by almost 70% across the past five fiscal years, and at the moment is many times higher than the dividends it pays out. I don't think the distribution will be in trouble anytime soon, and I wouldn't be surprised to see another big raise before too long.

Danaher's upcoming payout is to be distributed on April 24 to shareholders of record as of March 27.

Eric Volkman has no position in any stocks mentioned. The Motley Fool recommends Home Depot and Waste Management, and owns shares of Waste Management. Try any of our Foolish newsletter services free for 30 days. We Fools may not all hold the same opinions, but we all believe that considering a diverse range of insights makes us better investors. The Motley Fool has a disclosure policy.

Is It Time to Buy the Dow Jones' 3 Worst-Performing February Stocks?

Don't Risk Overexposure to These 2 Stock Sectors in 2021