Alex Dumortier, CFA
Although we don't believe in timing the market or panicking over market movements, we do like to keep an eye on big changes -- just in case they're material to our investing thesis.

What
Shares of Life Time Fitness (NYSE: LTM) rose as much as 20% on Friday (they're up 15% in recent trading) on a report in The Wall Street Journal that the company is in advanced negotiations for a sale with two different bidders.

So what
Life Time Fitness has massively outperformed the broad market since it went public in July 2006 and from the bottom of the bear market in March 2009 (albeit with much higher volatility, too): 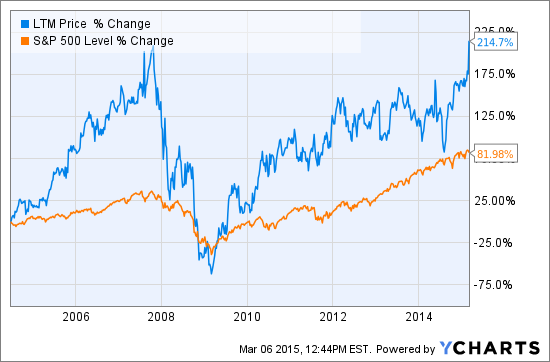 However, the company, which specializes in large format gyms, is facing increased competition from smaller studio-type facilities that offer specific branded workouts, including Soul Cycle and CrossFit. Net income declined 5.5% last year to barely above its 2012 level; in addition, the company has been unable to fund capital expenditures out of cash flow from operations during the past two years.

In its quest to maximize shareholder value, Life Time Fitness announced last August that it was considering placing its real estate assets into a REIT (real estate investment trust). For Life Time Fitness, a sale to private equity is part of the same logic -- another "strategic option."

Now what
Long-term shareholders of Life Time Fitness have had a good run and there are worse things than grabbing the control premium an acquirer is willing to pay (if it materializes), particularly when the business is facing a changing and perhaps more difficult competitive environment. On the other hand, I would advise individual investors who are considering jumping into the stock now to bet on an acquisition to avoid that game -- it's a poor proposition bet.