T-Mobile spends too much money keeping up with the pack to fall behind Sprint. 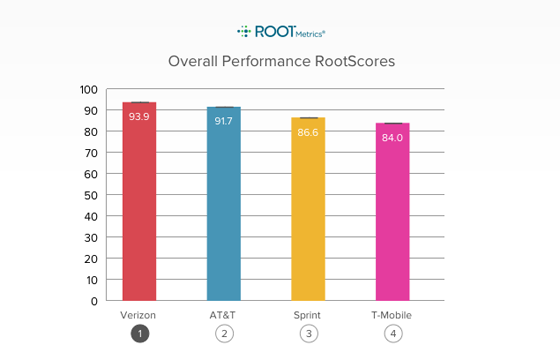 Obviously, no carrier wants to fall behind the pack, but this is particularly bad for T-Mobile because the carrier is spending so much money trying to keep up.

Hey big spender
In an interview with Re/code in January, Timotheus Höttges, CEO of T-Mobile parent company Deutsche Telekom, said T-Mobile was spending about $4 billion to $5 billion each year just to keep up with the competition, and that the spending is unsustainable.

Some of that money goes directly to network upgrades. "We had built an infrastructure and this infrastructure had to get utilized and we did that with very aggressive promotions," Höttges said.

Strong networks ultimately help keep customers from jumping to another carrier, and T-Mobile so far has successfully prevented mass exoduses. The carrier's postpaid phone churn rate (the monthly rate at which customers leave) was just 1.7% in fourth-quarter 2014.

But even with all of its network upgrades, the company fell short in call performance, which is one of the main reasons Sprint jumped ahead. 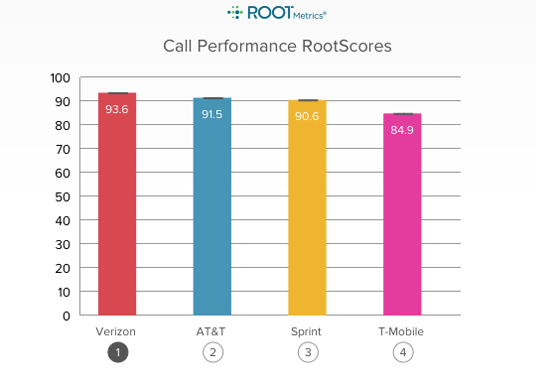 T-Mobile is trying to improve this with a somewhat unconventional approach by testing 5GHz airwaves, which are usually reserved for Wi-Fi signals, for running some of its LTE connections. The system won't be operational until 2016, but once live it should give T-Mobile a more reliable and consistent signal in some markets.

But with the billions T-Mobile has spent to upgrade its network and offer promotions to customers, the carrier should be very concerned with the latest RootMetrics score. T-Mobile has expanded its network reach over the past few years and rolled out 4G LTE very quickly, but now it needs to establish a reliable network across the entire U.S. if it wants to truly compete with Verizon and AT&T.

Meanwhile, T-Mobile expanded its 4G LTE footprint to 264 million points of presence, or POPs, by the end of 2014, and aims to hit 300 million later this year. By comparison, Verizon has about 306 million LTE POPs.

T-Mobile is also expanding its Wideband LTE (which can boost data speeds by up to 50%) into new markets with the goal of reaching 150 total markets by the end of this year. Wideband was released near the end of RootMetrics' testing period, so this could help improve part of T-Mobile's performance score.

The carrier also received high marks, and beat Sprint, in the speed index and data performance categories. If T-Mobile can improve its calling performance -- which RootMetrics said might be just a "transitory issue" -- then it's likely the carrier could outperform Sprint later this year.

Chris Neiger has no position in any stocks mentioned. The Motley Fool recommends Apple and Verizon Communications. The Motley Fool owns shares of Apple. Try any of our Foolish newsletter services free for 30 days. We Fools may not all hold the same opinions, but we all believe that considering a diverse range of insights makes us better investors. The Motley Fool has a disclosure policy.