Please ensure Javascript is enabled for purposes of website accessibility
Log In Help Join The Motley Fool
Free Article Join Over 1 Million Premium Members And Get More In-Depth Stock Guidance and Research
By Rich Smith - Mar 8, 2015 at 8:13AM

Are you ready for a three-course meal of Pentagon-acronym alphabet soup?

For years, rumors of China's new "carrier-killer" DF-21D Dong Feng missile have had U.S. military planners in a tizzy. Believed to have an effective range of as much as 1,200 miles -- miles the missile can traverse at speeds upward of Mach 10 -- the DF-21D is also believed to pose an existential threat to America's aircraft carriers. To counter this threat, the Pentagon has poured millions of dollars into funding efforts by Raytheon (RTN) to develop a RIM-162 ESSM "Evolved SeaSparrow" antimissile missile. The hope is that such a defensive weapon will be able to shoot down DF-21D, despite its high speed and high trajectory. Over at DARPA, though -- the Defense Advanced Research Projects Agency -- they're taking a different approach. Rather than react to threats from potential adversaries, DARPA thinks it's time to develop a few threats of our own.

Instead of just doing defense, it's time to play offense for a change.

Introducing LRASM
DARPA's first move to turn the U.S. Navy into a more potent threat is called "LRASM," or "Long Range Anti-Ship Missile." And while not as powerful as China's land-based DF-21D, it's still a force to be reckoned with.

According to DARPA, LRASM aims "to provide a leap ahead in U.S. surface warfare capability." The missile is designed to operate in antiaccess/area denial (A2/AD) environments featuring robust antimissile defense and fierce electronic warfare (i.e., "jamming" of guidance systems), too powerful for a Boeing (BA -3.00%) Harpoon missile to overcome. LRASM must be able to both operate independently of remote guidance and survive GPS jamming as well.

DARPA and its lead contractor on the project, Lockheed Martin (LMT 0.54%), have designed the missile to guide itself to target using "autonomous guidance algorithms" whenever remote control or GPS are unavailable, then "pinpoint" and strike its target independently.

And so far, so good. LRASM has already undergone three successful flight tests, says DARPA. And it's transitioned from a "DARPA technology demonstration program" to a full-fledged Navy acquisitions program (with a 2018 target date for deployment).

Fishing one missile out of the Pentagon's alphabet soup
Now, if you're an investor and want to be sure you're investing in the "right" company making this new missile, it's important to distinguish LRASM from several similar-sounding missiles the Pentagon is now working on. So, let's run down that list real quick, beginning with:

JASSM-ER: Like LRASM, Lockheed Martin's Joint Air-to-Surface Standoff Missile is designed to be fired from an aircraft and strike ground targets from a safe (from the perspective of the bomber) distance. JASSM can be fired from most combat aircraft in the U.S. arsenal, including soon the new F-35 stealth fighter. Built on a JASSM airframe, LRASM is essentially a smarter, more independent JASSM.

JSM: Raytheon and Norway's Kongsberg have put forward their Joint Strike Missile as an alternative to JASSM for replacing Boeing's Harpoon. Kongsberg developed JSM specifically with the aim of integrating it into the F-35, an aircraft the Pentagon is already heavily invested in.

JSOW: Raytheon's big gun in the contest with JASSM is the Joint Standoff Weapon, a missile Raytheon claims is comparable to JASSM in capability -- but costs less. Though its current range is about 60 miles, Raytheon is developing an extended-range JSOW variant capable of striking targets as far away as 250 miles. In contested environments, JSOW will use inertial guidance to supplement its GPS data.

The upshot for investors
As you can see, what we're looking at here is basically a three-horse race. The Navy appears to be losing interest in Boeing and its Harpoon (although Boeing's certain to offer improvements). Meanwhile, Lockheed and Raytheon are trying to horn in on Boeing's business. At present, the Pentagon appears to favor Lockheed's offerings in the form of JASSM and LRASM over Raytheon's JSM and JSOW.

To date, Lockheed says it's already assembled "more than 1,500 JASSM cruise missiles" for the U.S. Air Force alone -- and anticipates selling at least 4,900 of them. Precisely how much money this all means for Lockheed is unclear, but already, the Pentagon has awarded LRASM test contracts worth at least $70 million to Lockheed.

As soon as we know more, you'll know more. Stay tuned to The Motley Fool. 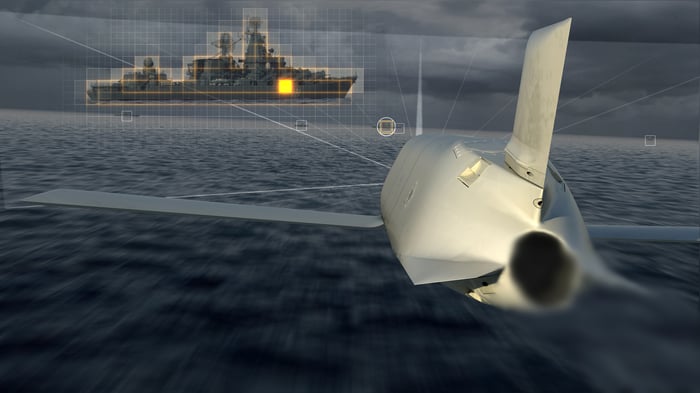 Rich Smith owns shares of Raytheon. You can find him on CAPS, publicly pontificating under the handle TMFDitty, where he's currently ranked No. 310 out of more than 75,000 rated members.