Please ensure Javascript is enabled for purposes of website accessibility
Log In Help Join The Motley Fool
Free Article Join Over 1 Million Premium Members And Get More In-Depth Stock Guidance and Research
By Evan Niu, CFA - Mar 9, 2015 at 10:27AM

Apple finally joins the Dow Jones Industrial Average, effective later this month. This was all made possible by the tech giant's stock split.

The debate over whether Apple (AAPL -0.29%) belongs in the Dow Jones Industrial Average has raged for years. The Dow's main purpose has always been to capture the performance of the biggest blue-chip stocks. The number of featured stocks has risen from 12 to 30 over the index's history.

As the most valuable publicly traded company in the world, the long-standing arguments that Apple simply belongs in the Dow Jones Industrial Average are justified. But the Dow's peculiar price-weighting methodology precluded that possibility as Apple's valuation soared in recent years.

S&P Dow Jones last week officially announced, though, that the Mac maker will join the Dow effective March 18. Apple will replace AT&T (T -1.91%), which has held a seat on the average since 1916.

Brought to you by Apple's stock split
Prior to 2014, Apple's soaring price would have given it a disproportionately large weight in the Dow. But the company's 7-for-1 stock split last June paved the way for its inclusion in the iconic index.

To illustrate, this is how Apple would have been weighted in the Dow before its split if it were to replace AT&T. 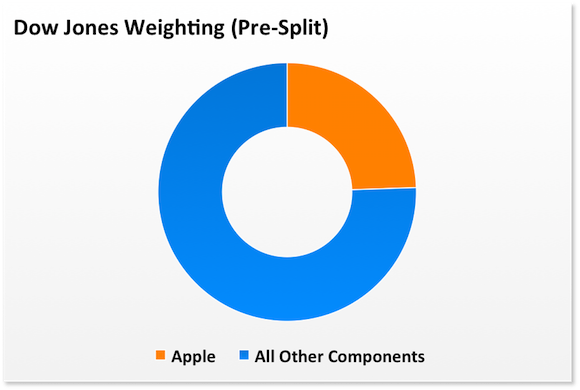 S&P Dow Jones said another reason for the change is Visa's upcoming 4-for-1 stock split, which will be effective on March 19. The credit card network announced the split in January. Right now, Visa is the highest-priced stock within the Dow, comprising nearly 10% of the current weighting. The stock split will push down the information technology sector's representation within the index, and S&P Dow Jones aims to offset that impact by bringing Apple into the fold.

Based on current prices, the Dow's weighting will look like this after all the changes take effect. 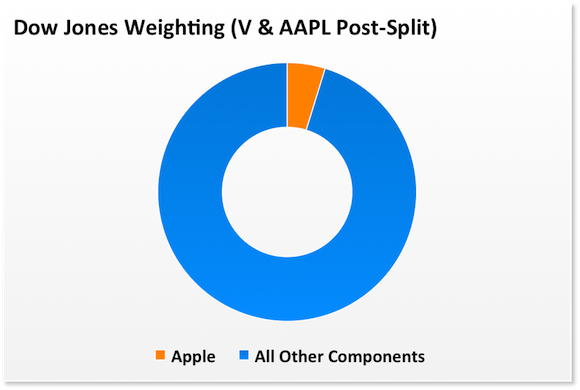 Apple's addition shouldn't particularly surprise investors, since the pre-split high price was the most significant impediment.

What it means for the Dow
After the change, the Dow will be able to boast that it includes the bluest of the blue chips, and it will be able to mitigate the impact on sector representations among its 30 members. Even though AT&T is being dropped, Verizon Communications will still represent the telecommunications services sector.

The Dow's divisor changes over time as the composition of the index changes. The current divisor is 0.15571590501117, and it will be adjusted on the morning of March 19 to ensure a seamless numerical transition.

What it means for Apple
The only effect on Apple will relate to market mechanics. All of the index mutual funds and exchange-traded funds that track the Dow (and there are many) will soon be obligated to purchase shares in order to track the underlying index.

That creates a short-term jump (shares gained 1% following the news despite broader market weakness), but also technically reduces the number of shares being actively traded since those funds just sit on the shares. Due to the creation/redemption process for shares, exchange-traded funds are also constantly trading in the securities that compose their underlying indices.

For these reasons, greater volatility can potentially ensue.