Industrial companies such as Honeywell International (NYSE:HON), 3M (NYSE:MMM), and Emerson Electric (NYSE:EMR), and lesser known Rockwell Automation (NYSE:ROK) are all facing a common threat to their future sales growth, especially over the next couple of years.

That threat, a strongly rising dollar, represents an often overlooked problem for industrial companies who sell products overseas. Yet, understanding this concept, and how some of these companies are dealing with this issue, is important because it might greatly effect investor's long-term total returns. " 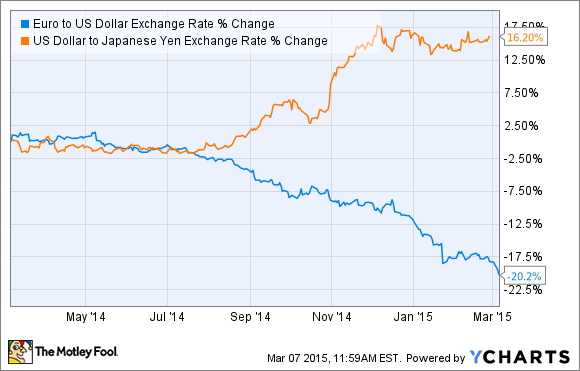 Euro to US Dollar Exchange Rate data by YCharts

As this chart shows, the U.S. dollar has appreciated strongly over the past year, which means that international sales  become more expensive from the perspective of foreign countries and companies. The reason for this strong appreciation of the greenback, and why it might continue for several more years, is threefold.

First, the U.S. economy has outperformed the economies of Europe and Japan, both of which are struggling to stave off recession. Second is that the European Central Bank and Japan's central bank have instituted aggressive quantitative easing, or QE, programs -- i.e., money printing -- both to spur economic growth and to prevent deflation, which threatens to result in a downward spiral of ever weakening economies.

Finally, the U.S. Federal Reserve has stopped its own QE initiative and stated that it plans to raise interest rates sometime in 2015, because of the strength of the U.S. economy and especially our consistent growth in jobs over the past year. Higher interest rates relative to those in Europe and Japan would make the U.S. dollar more attractive to investors and could cause it to strengthen further.

A stronger dollar can transform sales growth into declines
Just how much of an effect will a strong dollar have on these industrial companies? The effect may be significant. For example, Rockwell Automation expects a stronger dollar to reduce sales growth by 4.5% in 2015. Given that management is guiding for organic growth of just 2.5% to 5.5%, that means that even if sales increase by as much as 4% this year, currency effects would result in a sales decline for the year.

Meanwhile, Emerson Electric expects a strong dollar to shave 4% to 5% off its sales growth this year. Other industrial firms have similarly expressed concern about the rising dollar. For instance, 3M CFO Nick Gangestad recently said a strong dollar could reduce 2015 sales by 2% to 3%.

During its last quarter, the company saw a 3.3% sales increase -- in constant dollars -- in Europe, the Middle East, and Africa turned into a 6.4% decline, because of negative currency effects. Overall, across the company, a stronger dollar reduces sales growth by 4.4% for the quarter, consuming 69% of total sales growth.

While all of these companies face headwinds from a rising dollar in terms of slower sales growth, some are faring better than others thanks to currency hedging such as Honeywell whose recent currency hedges allowed it to beat Wall Street expectations in the most recent quarter. Likewise 3M beat expectations as well thanks to hedging 50% of its exposure to currency fluctuations.

However, while investors should applaud Honeywell and 3M for their foresight, their hedges are only good for 12 and 24 months respectively, meaning that both companies longer-term sales are still threatened if European and Japanese QE programs become multi-year events that result in a long-term strong dollar. 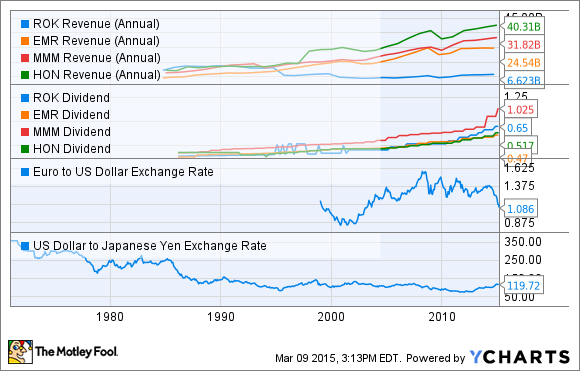 As this chart shows currency swings can be volatile and produce declines in sales that last several years. However, over the long-term these industrial dividend growth superstars have shown an ability to adapt to changing international market conditions and reward patient investors with market beating returns.

Takeaway: The next few years may see growth slow, but long-term investors should still come out winners
The rising dollar threatens to hurt sales and profits of these industrial dividend champions, both large and small. However, given their excellent track record of rewarding shareholders with decades of strong dividend growth and market beating total returns, including through periods of time where similar headwinds were in effect, I remain bullish on their long-term prospects. Thus, I would recommend that long-term income investors consider any price drops that result from temporarily slowed growth in the next few years as an opportunity to buy more of these quality industrial companies as part of a well-diversified dividend growth portfolio.