There's just not enough cheap natural gas to keep New Englanders from paying exorbitant prices during the winter when demand is highest. It's a problem that natural gas pipeline kingpin Kinder Morgan (NYSE:KMI) is hoping to solve via its Northeast Direct, or NED pipeline project. Recently, the project took one step closer to becoming a reality after the company signed up enough anchor shippers to continue moving forward. If built the project could end up saving energy consumers in New England $3 billion dollars per year.

Thanks to the abundant natural gas resources that have been unlocked from the Marcellus shale, America is awash with cheap natural gas. That being said, we don't yet have enough natural gas pipeline capacity to get that cheap natural gas from the middle of Pennsylvania to market centers in the east. That's causing consumers in places like Boston and New York to pay much higher natural gas prices than other locations in the country that have greater access to gas at the standard Henry Hub rate. We can see the difference in prices on the following chart from the U.S. Energy Information Administration. 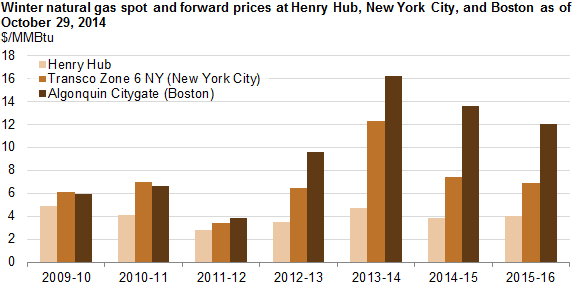 Building a solution
This is a problem that Kinder Morgan is planning to fix. It proposed the NED project to move cheap natural gas from the heart of the Marcellus shale directly to New England where it can be piped to places that need more gas in the winter. As the map on the following slide shows the company is planning a market path pipeline from Wright, New York, to Dracut, Massachusetts. 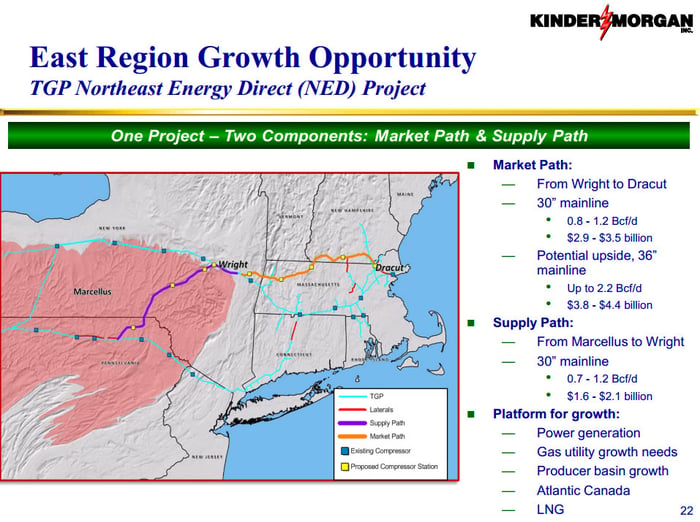 As that slide notes the company could build up to a 36-inch pipeline, which could bring upward of 2.2 billion cubic feet, or Bcf, of natural gas per day to the region. To put that into context, 1 billion cubic feet of natural gas is enough to meet the needs of 10,000 to 11,000 American homes for one year. So, this could supply the region with plenty of gas to help meet peak demand in the winter as well as enable New England to build cleaner natural gas power plants to replace coal.

By signing up a number of gas utilities as anchor shippers Kinder Morgan now has the contracts it needs to continue to move forward with the project. It's a project the region desperately needs as it will not only reduce the currently high prices consumers pay for natural gas in the winter, but it will keep those prices from getting out of hand as the region is estimated to need at least 2 Bcf/d of additional natural gas supplies in the future to support its growth. If everything goes according to plan the pipeline could be in service by November 2018, which would be just in time to save consumers on their gas bill that winter.

Investor takeaway
For Kinder Morgan's investors the NED project is a key one for the company's future. It has spent the past several years building pipelines to get gas out of key producing regions. Now, however, it sees market demand pipelines, like NED, extending its growth as it moves from building pipelines to push gas out to those that are pulling it to end users. It's a big growth market that has the potential to enable the company to continue to grow its fee-based income at a healthy future clip as it brings cheap natural gas to the regions that need it the most.