America's largest railroad company, Union Pacific Corporation (NYSE:UNP), has grown over the years through hectic mergers and acquisitions, phases of being in receivership, labor upheavals, allegations of inhibiting competition, and forceful divestment of businesses. It is one of the few companies of its time that has kept pace with a changing environment and not only survived, but prospered.

After 150 years of operations, Union Pacific's success story only gets more exciting. As the railroad major charts newer territories, let's hop on board and rediscover how it became America's favorite railroad company.

How did the company get its start?

It all started when President Abraham Lincoln signed the Pacific Railroad Act of 1862 to construct the first transcontinental railroad. Two companies got the job: Central Pacific and Union Pacific Railroad. The former laid tracks eastward from Sacramento, Calif., and the latter, westward from Omaha, NE. The transcontinental railroad was completed in 1869, but Union Pacific's journey had just started, as its trains carried passengers and goods from one part of the country to another.

The company received an early blow when it went bust in the Panic of 1893, which witnessed a series of bank failures and more than 15,000 bankruptcies in the U.S. Four years later, Union Pacific was sold to a group of investors in a foreclosure, and one of these investors, E.H. Harriman, revived and recovered it.

Union Pacific together with other American railroads did brisk business until the 1920s, when automobiles started encroaching on its territory. After World War I, rapid industrialization took place in the south and west, and the government started funding construction of highways. Soon, trucks became an alternative for carrying cargo, and travellers started opting for motor cars. By the 1970s, the entire railroad industry was ailing.

How did it get to where it is today?
Two events shaped the course of Union Pacific's history.

In 1976, the government passed the Railroad Revitalization and Regulatory Reform Act (4R Act), which was the first step toward de-regulation of the American railroads. Since 1887, Interstate Commerce Commission (ICC) was the independent agency responsible for overseeing and regulating the railroad industry. Its objective was to strike a balance between the interests of the railroad companies and that of the shippers.

Restrictions imposed by the ICC on fixing freight rates became a huge problem for railroads as they couldn't lower rates to compete with trucks and kept losing market share. Railroads' share of intercity freight movements fell to 35% in 1975, from 75% in 1920. The 4R Act eased rate regulations, line abandonment, and mergers. It was the precursor to the Staggers Rail Act of 1980, which, for the first time, gave railroads the power to negotiate confidential contracts with shippers.

With these developments, Union Pacific started to evolve as the company we know today. It went on an aggressive acquisition spree in the 1980s and 1990s and emerged as the country's biggest railroad company. Demand for railroads grew nearly 30% in the 1990s, aided by economic growth and the deregulation. Though Union Pacific struggled with the integration of its newly acquired Southern Pacific, there was practically no looking back from the end of the millennium. 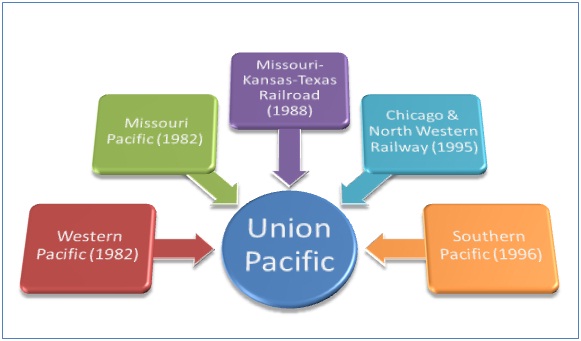 Where it stands now
Today, as the country's largest railroad company, Union Pacific plays an integral role in linking the major economic hubs across the country. Mainly serving the Western two-thirds, it joins 23 states and all of the significant West Coast and Gulf Coast ports to the East. It facilitates international trade by connecting with Canadian railways and is the only railroad to cater to all six major Mexico gateways.

With nearly 32,000 route miles, it was voted the most admired logistics company by Fortune for the fifth time in a row in February.

In 2014, Union Pacific generated total revenues worth $22.6 billion from its business, increasing 9.2% over the previous year. Agricultural and industrial products saw double-digit growth in freight revenues and volume. It's in the second phase of its track-extension plan along Highway 90, which will boost traffic competence on the Golden Subdivision line. 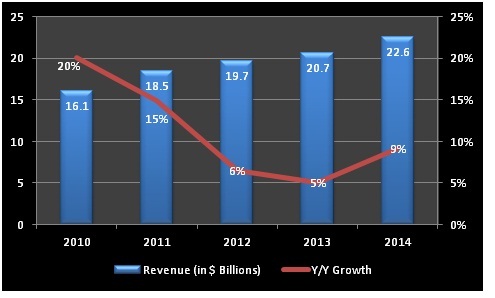 The Union Pacific stock gained 42% in 2014, outpacing the S&P 500 by 30 percentage points. Consistent improvement in operating rates and a rich dividend-paying history ensures this centuries-old company is not going to run out of steam.