The perfect stock is something you can buy once, stuff the stock certificate under your mattress, and sleep worry-free for decades.

Unfortunately, I'm here to tell you that Hewlett-Packard (NYSE:HPQ) doesn't have that kind of staying power. In fact, it's a deeply troubled company that seems more likely to destroy your wealth than to build it.

Don't just take my word for it
I'm neither the first investor to make that claim, nor will I be the last. The vibe around HP is so bad that even analyst upgrades of the stock come with heavy backspin.

"Our upgrade is not based on strong fundamentals, but we think the downside risk is limited," said UBS Securities analyst Steven Milunovich this week, in support of his brand new "buy" rating.

And even so, I think that Mr. Milunovich is being too charitable. Let me explain why.

First, Hewlett-Packard share prices may have retreated 19% in 2015, but they've actually trounced the market over the last two years. Since the start of 2013, HP investors have enjoyed a 107% dividend-adjusted return on their investment while the S&P 500 only gained 40%. So it's fair to say that the market is already pricing in some of Milunovich's "fruitful turnaround" thesis. 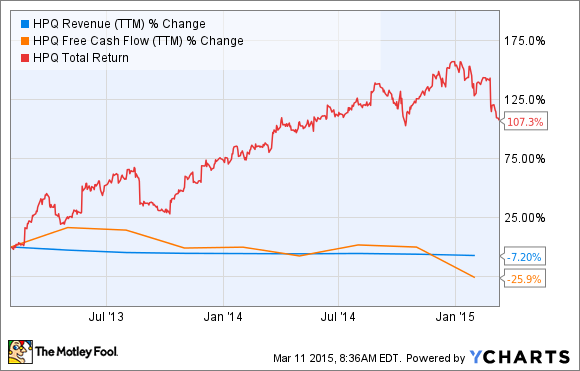 Meanwhile, Meg Whitman is trying to emulate the good old IBM (NYSE:IBM) business model. That's where one company sells everything from server hardware to client-facing software and expects to reap synergy benefits from this complete portfolio. This idea served IBM very well for two decades, starting from the mid-1990s, and inspired a plethora of wannabe copycats.

Whitman used to embrace the IBM blueprint wholeheartedly, claiming to "focus" on three different hardware operations and three separate software units. That's not a focus at all, but a sprawling list of distractions from what was actually working for HP.

In fact, the IBM model isn't even working for IBM anymore. Big Blue is going through its own painful reorganization, ejecting most of its hardware operations to concentrate on software and services.

This way, IBM remains a formidable competitor to HP's enterprise software and services ambitions. Elsewhere, the company faces off against Lenovo and a resurgent Apple Mac lineup in the consumer PC market, against a horde or large and competent rivals in data security, and an even larger army in cloud computing services. It'll take some doing to dominate any one of these difficult markets, let alone stay relevant in all of them.

Right idea, wrong execution
It was good news when Whitman finally agreed to split HP into two separate companies, one doubling down on enterprise computing and the other one on consumer products. But this is a separation only in name, since nothing really changes in the management structure.

No, really. The consumer business will still have Meg Whitman setting the strategic direction as chairman, while her CEO post is handled by Dion Weisler, who will essentially do the same job that he holds today as executive VP of HP's consumer products division.

On the enterprise side, strategy moves to former Alcatel-Lucent CEO Pat Russo but Whitman keeps the CEO's corner office. So in practice, Whitman will retain much of her strategic vision on the enterprise side as well, with plenty of opportunity to push back if Russo tries to mix things up.

So the half-and-half split that should have unlocked true value in Hewlett-Packard doesn't really change much -- except that Whitman and her lieutenants now must juggle two sets of business assets and operational goals with more finesse. It's not the clean split that HP needs.

If HP has failed to deliver on its turnaround promise over the last couple of years, I don't see much promise of improvement in the near future. Meg Whitman needs to let go of her ambition to keep HP united, pick one half (double down on your consumer-oriented expertise, ma'am!) and leave the other unit in entirely different hands.

There just aren't enough hours in the day for one person to fix the mess that HP is in. And that's exactly what Whitman is trying to do, under the covers of a largely meaningless company split.

The takeaway
In other words, I don't see the successful turnaround that Steven Milunovich is talking about, and I don't expect any meaningful improvements until Meg Whitman truly divides the current company. And the recent run-up in HP's share prices only seems to set investors up for a terrifying correction.

Buy it and forget it? No way. With a HP stock certificate under my mattress, I'd sleep about as easily as a shark running on sugar and espresso. This stock is definitely not built to last.