Perhaps it's the lingering sub-freezing temperatures in many parts of the country. Or maybe we're entering a relatively fallow period between earnings season. Whatever the cause, the pace of dividend declarations has slowed down. And as usual when this occurs, there have been fewer raises in the distributions of publicly traded companies.

That said, there were still a number of firms willing to throw more coins to their shareholders in the form of enhanced payouts. Three notables that did so last week were:

Best Buy (NYSE:BBY)
Well, this is one memorable way to return money to stockholders. The big electronics retailer has not only lifted its quarterly dividend by 21% to $0.23 per share, it's also declared a special one-time payout of $0.51 per share thanks to a set of legal settlements regarding its selling of LCD displays. 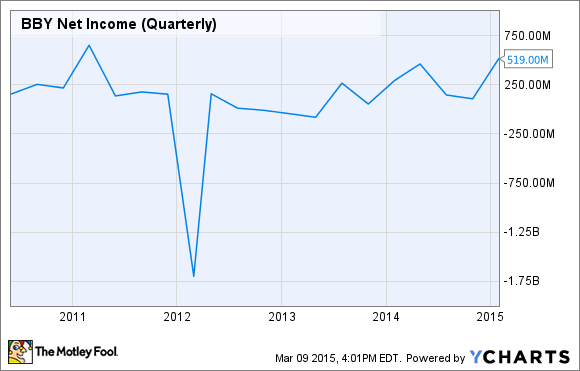 Those are good numbers, but they're fueled largely by the company's Renew Blue cost-cutting initiative, not huge improvements in sales. On a year-over-year basis, quarterly revenue of just over $14 billion barely moved the needle, and the full-year figure of $40 billion was actually down slightly from that of fiscal 2014.

And going forward, Best Buy has warned that sales growth for the first half of this year will be negative or flat, hampered by factors such as falling prices, and lower take-up of its extended warranties (a high-margin money maker for the company). So I think caution is warranted as far as the company's fundamentals are concerned, and by extension the future of its dividend.

Both Best Buy's upcoming regular dividend and the special disbursement are to be paid on April 14 to shareholders of record as of March 24.

GameStop (NYSE:GME)
The business game is going well for this specialty retailer, which last week boosted its quarterly dividend by 9% to $0.36 per share.

That's in advance of the company's Q4 and fiscal 2014 results, slated for release on March 26. The chunky dividend hike portends well for those figures, as does the results from its holiday season. It was a good period for the retailer, with encouraging growth (6%) in sales of new software, the firm's top revenue source.

That helped cushion the blow from a drop of 32% in the hardware category. That sounds scary, but it was the only serious decliner across GameStop's product lines. All told, net sales held up pretty well considering the situation -- they were down 7% to $2.9 billion.

I'd expect the software growth/hardware drop trend to continue, since the current generation of consoles is no longer new, while popular recent titles like Grand Theft Auto V from Take Two Interactive are likely to remain in strong demand over the coming quarters. 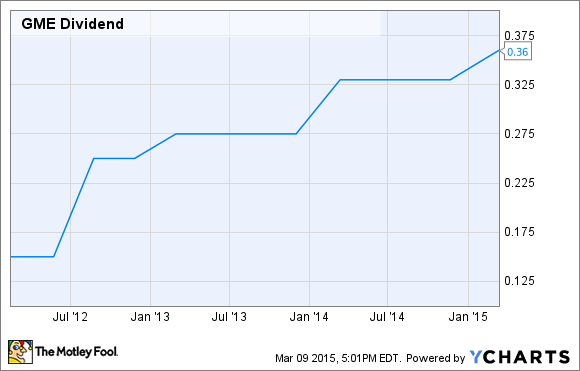 As for dividend sustainability, at the end of its most recently reported quarter GameStop's cash position was nearly 10 times as high as what it'll be paying out on a quarterly basis for its raised distribution. Considering that and the decent holiday sales figures, I think the new dividend is sustainable for now. But investors should keep an eye on those Q4 and annual figures when they're released later this month.

GameStop's new dividend is to be dispensed on March 24 to stockholders of record as of March 17.

Hill-Rom Holdings (NYSE:HRC)
This maker of medical equipment is a longtime dividend payer and raiser. It's keeping both habits in force with its recent declaration of a $0.16 per share quarterly distribution, a 5% improvement over its predecessor.

This followed a Q1 that saw Hill-Rom boost its total revenue by a sturdy 18% on a year-over-year basis to $465 million, which well exceeded the average analyst estimate. Although much of this was due to the acquisition of operating room equipment purveyor Trumpf Medical last year, the company regardless would have posted a sales increase of around 6%. 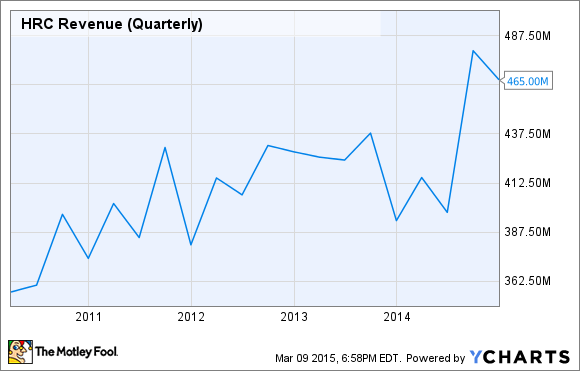 Meanwhile, net income sagged a bit, dropping to just over $12 million from the year-ago quarter's $13.2 million.

Zooming out a bit, prior to the Trumpf Medical buy the company's top line had been stagnant and its net profit on the decline in recent years. That's in no small part due to its rivalry with the larger and more diversified Stryker.

The Trumpf Medical acquisition seems to be a sensible one for Hill-Rom, a profitable buy that should juice its results in the future. If those profit estimates are realistic, free cash flow should grow commensurately and allow the firm to at least maintain its just-raised dividend.

Said distribution will be handed out on March 31 to shareholders of record as of March 17.