Hint: Normalized sales mean healthier inventory. But this time, it's better for some companies than others.

Almost exactly four months ago, I went out on a limb to argue that Smith & Wesson Holding Corp's (SWBI -1.27%) falling sales were actually a great thing for the firearms manufacturer. After all, investors at the time seemed torn by the fact that Smith & Wesson's quarterly revenue had just dropped 22% year over year, hurt by heavy promotions and including a 50% decrease in modern sporting rifle sales.

But more important to investors -- both then and now -- is Smith & Wesson CEO James Debney's stated goal to "manage our business for the long term in a way that gives us the ability to take market share, independent of whether the market is growing or shrinking." Shares of fellow firearms manufacturer Sturm, Ruger & Company (RGR -3.55%) had only just plunged after its own CEO admitted they likely lost "significant" market share by refusing to follow the aggressive discounts of competitors.

As it turns out, shares of both companies have skyrocketed almost exactly 40% since then -- though the bulk of Ruger's gains came on the heels of upbeat comments during its most recent quarterly report two weeks ago: 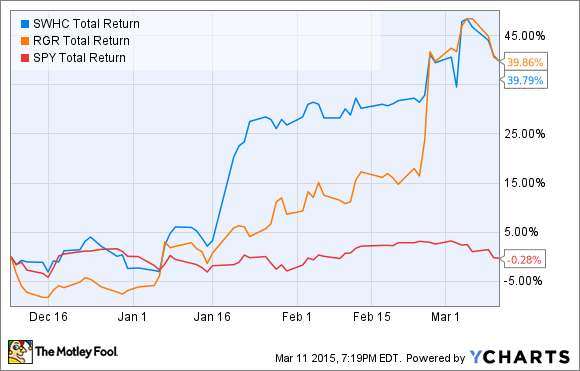 So why the latest rise?

In short, investors can thank the more stable state of the gun market, which is finally returning to normal after last year's outsized consumer demand. That demand subsequently led to more recent overstocking by distributors who, in turn, had to scale back on orders as they brought inventories down to a more appropriate level.

Going forward, I see opportunities for Smith & Wesson and Sturm, Ruger -- but for different reasons.

Smith & Wesson: Market share and diversification
First, Smith & Wesson's Debney noted during the company's latest conference call that internal firearm inventory declined by more than $14 million, to $85 million -- leaving it nicely poised to reach its year-end goal of $75 million to $80 million -- while distributor inventory of Smith & Wesson products remained roughly flat. This indicates the inventory situation is beginning to correct itself and will likely see even more positive progress in the coming quarters.

More importantly, Debney stated of the company's most recent quarter, "Our promotions, which were designed to offset any potential market share loss in the competitive environment, were successful." As as a result, and as firearms sales continue to normalize, Smith & Wesson should emerge a stronger company commanding a larger piece of that industry going forward.

In addition, Smith & Wesson completed its acquisition last quarter of Battenfeld Technologies, or BTI, which provides a solid platform for it to diversify by capitalizing on the more steady hunting-and-shooting-accessories business. Smith & Wesson expects this new accessories segment to offer double-digit growth over the long term.

It's worth noting, however, that Smith & Wesson did take on significant debt in order to finance that $130.5 million purchase, including $100 million pulled by partially exercising an "accordion feature" of an existing line of credit. As I suggested in December, however, the combination of BTI's anticipated contribution of $55 million in incremental revenue and $15 million in EBTIDA should leave Smith & Wesson still operating well within its comfort zone for leverage.

Sturm, Ruger: Better-than-expected balance sheet
Despite my fondness for Smith & Wesson, I also can't ignore the renewed excitement investors have for Sturm, Ruger.

Roughly two weeks ago -- and keeping in mind the above-mentioned comments on losing share -- Ruger CEO Michael Fifer pointed out he had "initially thought we lost significant market share during the second half of the year" because sell-through for Ruger's products from distributors to retailers had fallen 20% year over year compared to a more modest 12% decline for NICS background checks. However, Fifer admitted he may have been wrong about that assumption:

[...] But analysis of the quarterly import data for handguns has made me rethink how much share we might have lost. Recently published handgun import data from the major supplying countries [...] indicate that they experienced major reductions in import volumes to the USA in the second half of the year. That implies that demand for their products may have declined in a similar fashion to the pattern of demand we observed for our products. Perhaps we did not lose as much share as the NICS numbers first indicated.

This still means Ruger lost market share by refusing promotions -- just not as much as Ruger had previously led investors to fear.

On the other hand, much like Smith & Wesson, Ruger is also seeing early indications that demand to distributors is improving, and believes distributor sell-through in 2015 will be most comparable to the 1.8 million units the company saw in 2012. For perspective, that's just before the initial surge in demand occurred in 2013, but a solid improvement over the 1.4 million annualized rate they saw in the second half of 2014.

Finally, Ruger has a healthy balance sheet and steady track record of returning capital to shareholders. Regarding the former, the company currently has around $9 million in cash with no debt, and generated $55.6 million in cash from operations last year. Regarding the latter, Ruger investors enjoy a variable dividend of roughly 40% of net income each quarter, which gives the company the flexibility to share its spoils with investors regardless of how the firearms market ebbs and flows.

Foolish wrap
These latest developments make the decision to choose one or the other more difficult than it was a few months ago, and I find myself torn between them for their respective strengths. But in the end, I still lean toward owning Smith & Wesson for its smart use of leverage, ability to take market share, and the diversification of its BTI acuisition.