Since reporting in November that its promising hepatitis C drug ACH-3102 helped clear the virus from 100% of patients in a small clinical trial, shares in Achillion Pharmaceuticals (NASDAQ:ACHN) have been one of the most volatile in biotechnology.

Shares have soared from less than $10 in early November to a peak of $16 in January, only to tumble back below $11 earlier this month. 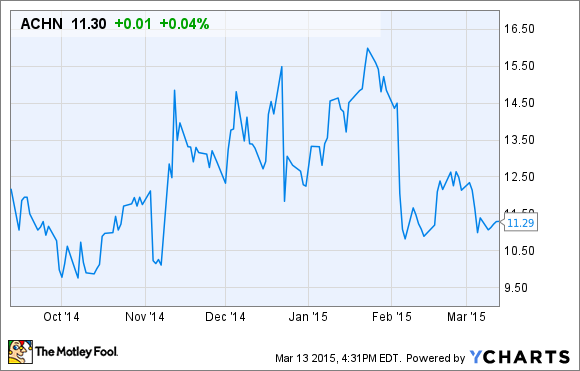 Swings like that can cause even the most risk tolerant of us to question whether it's worth owning Achillion. After reconsidering its potential, however, I've decided to stick with it a bit longer. Here's why.

A busy year for hep C drugmakers
The approval of Gilead Sciences' (NASDAQ:GILD) Sovaldi last year revolutionized hepatitis C treatment. Sovaldi cast aside reliance on side-affect-laden peginterferon and cut patient treatment times in half, to 12 weeks, all while delivering functional cure rates of 90% or more. Those advantages catapulted Sovaldi into a near-instant blockbuster drug that ended up generating more than $10 billion in sales last year.

Gilead Sciences notched a second big win with the approval of Harvoni, a genotype 1 treatment that doesn't rely on peginterferon or ribavirin -- another pesky prior-generation drug -- that can be used for as little as eight weeks and boasts cure rates in the high 90% range. Despite a lofty price tag, demand for Harvoni was so great that its sales were north of $2 billion in just its first quarter on the market.

In addition to Gilead Sciences and AbbVie, other drug makers also remain interested in addressing this sizable market. Merck & Co (NYSE:MRK) is developing in-house HCV drugs, and last summer, the company made a big splash when it announced its $3.85 billion acquisition of Achillion's HCV rival Idenix Pharmaceuticals.

Also, Bristol-Myers Squibb (NYSE:BMY) is carving out an HCV market niche overseas with daclatasvir, and a recent FDA filing for approval could mean that daclatasvir begins being used alongside Sovaldi in U.S. genotype 3 patients by year-end.

All that activity suggests to me that there is still value in developing best-in-class solutions for this widespread disease.

Innovating treatment
Although recently approved therapies like Sovaldi have done a great job at improving upon predecessors, there's still a lot of work to do. Treatments still don't work for all patients, and dosing regimens that last 12 weeks are ripe for non-adherence risks that could cause treatment to fail. For that reason, I think that Achillion's ACH-3102 might be a valuable product that can carve out a share of this lucrative market.

In November, Achillion reported that dosing ACH-3102 with Sovaldi for eight weeks provided a functional cure for all 12 patients in its trial, including those with high viral loads. In December, Achillion announced interim results that ACH-3102 alongside Sovaldi similarly cleared the virus in just six weeks. Those interim results were confirmed in February, when the trial was completed.

Delivering a functional cure in a treatment duration that halves the current standard of care is incredibly intriguing, but even more intriguing would be if Achillion's next study pans out similarly. After the six-week trial's success, Achillion announced that it's evaluating ACH-3102 alongside Sovaldi in a four-week regimen.

One-trick pony?
Significantly reducing the number of doses could mean that more patients complete therapy, and the cost of treating hepatitis C declines. If so, ACH-3102 could be attractive to competitors eager to outmaneuver Gilead Sciences, as well as to payers who might be more willing to back the use of this treatment over others in order to cut costs.

If a suitor can't ink a deal to acquire Achillion, then the company will have to go it alone. To that end, Achillion is developing ACH-3422 as a potential replacement for Sovaldi, and is evaluating the use of a protease inhibitor alongside those two drugs to further boost efficacy. It's too early to say whether ACH-3422 can work as well as Sovaldi in the mashup, or whether adding the protease inhibitor will work; but if such a triplet regimen is effective, it would give Achillion its own in-house HCV solution.

If these combinations fail, however, Achillion's success or failure rests on ACH-3102.

There's no guarantee that Achillion will end up being one of the companies able to capture a share of this massive market, but given that ACH-3102 could cut treatment periods in half, or more, I'm willing to ride this recent share price drop out a bit -- at least until I see what happens with the four-week trial.