What: Energy infrastructure and pipeline construction company Willbros Group Inc (NYSE: WG) stock is getting slaughtered today, down almost 57% before noon. Earlier in trading, the stock was down almost 75%: 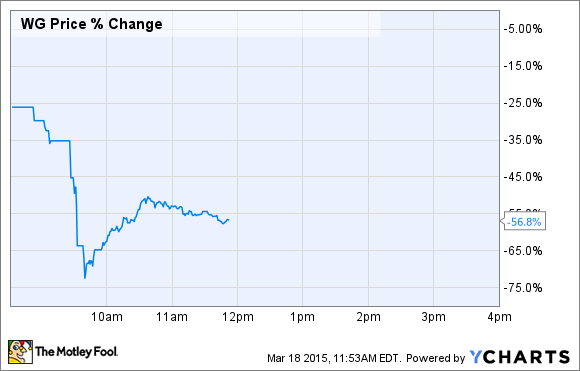 So what: In an SEC filing yesterday, Willbros Group said that it would be unable to file its annual report on time. Here's why, from the filing (emphasis mine):

The Company does not expect to be in compliance with its Maximum Leverage Ratio and Minimum Interest Coverage Ratio for the period from March 31, 2015 through March 31, 2016. As a result, the Company is in discussions with its lenders regarding amendments and waivers to its credit agreements. Without a definitive waiver or amendment, all indebtedness under its credit agreements would become due in the next twelve months. If the debt under the Company's credit agreements becomes accelerated and the lenders demand repayment, it is expected that the Company will not have sufficient forecasted liquidity to retire its existing debt obligations, which raises substantial doubt on the Company's ability to continue as a going concern.

Now what: Plain and simple, the company is at serious risk of going bankrupt, unless its creditors are willing to make concessions. At this stage, it's almost impossible to predict what will happen, and frankly this is exactly the kind of unexpected, unforeseen, event that can wipe investors out. If you hold shares of Willbros Group, all I can say is I hope you're diversified and it isn't a large part of your portfolio today.

If you're looking to buy, I encourage you to look elsewhere. Buying shares today is absolutely no different than betting on a coin-toss. Instead of making a guess, invest in a solid company like the one discussed in the report linked below.