The ideal retirement stocks will make you money, while also allowing you to relax. Source: flickr user Olaf Gradin

When investing for retirement, the last thing you want to worry about is what your stocks are doing on a daily basis. The ideal retirement stock provides steady, predictable earnings growth, a dividend that increases significantly, and relative immunity to recessions and other adverse economic conditions.

Fortunately, many stocks fit that description. Here are three of the best stocks that can help you build the retirement of your dreams without causing you unnecessary stress.

When the going gets tough, consumers go here

In the retail sector; not many companies perform well during a recession or other tough economic times. One exception is Wal-Mart (NYSE:WMT).

Wal-Mart's scale and low-frills approach allows the company to undercut pretty much all of its competitors -- even online retailers like Amazon.com in many cases. Because of this, along with Wal-Mart's "one-stop shop" business model, the company does well in any economic environment.

When the economy is doing well, Wal-Mart's loyal customer base has more money to spend. In bad times, even though consumers have less money to spend, Wal-Mart attracts more shoppers, which more than makes up for it. Consumers who generally shop at higher-end retailers tend to look for bargains when they need to tighten their belts, and Wal-Mart is certainly a great place to find bargains.

To emphasize this point, consider how well Wal-Mart performed during the 2008 crash. While other retailers' profits plunged, Wal-Mart actually earned more money and performed even better than it did before the crash. 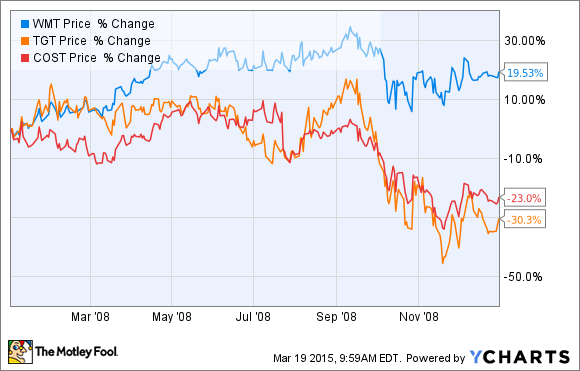 Simply put, Wal-Mart can thrive no matter what the economy is doing. As the company continues to grow and evolve, its competitive advantages will only improve.

The ability to capitalize on tough times
One characteristic to look for in stocks you don't want to baby-sit is a company's ability to come out of bad times stronger than it went in. One company with that capacity is ExxonMobil (NYSE:XOM).

For starters, as the largest publicly traded integrated oil company, ExxonMobil has exposure to all aspects of the petroleum business. That means even when certain businesses are losing money when oil prices are down (such as exploration and production), others actually do better (such as Exxon's refining and chemicals business). Plus, its size gives it a competitive advantage over its rivals, because it can run more efficiently and use economies of scale to its advantage.

Also, during tough times, the strongest companies capitalize on the opportunity to buy smaller (and weaker) rivals at a discount. For example, the acquisition of Wachovia during the financial crisis left Wells Fargo even better off now than it was before. ExxonMobil has the same potential when oil prices crash (like they recently did).

The company can borrow as much money as it wants to very cheaply, since it is one of just three companies in the U.S. with a top-notch AAA credit rating (not even the U.S. government has credit as good as ExxonMobil). In fact, it just used its superb credit to raise $8 billion, which it could employ to acquire other companies.

Possibly the best retirement stock there is
As I said in another recent article, there is simply no better all-around stock in the market than Berkshire Hathaway (NYSE:BRK.A) (NYSE:BRK.B).

The company's general business model is pretty simple. Berkshire's primary business is insurance, which it conducts through subsidiary companies such as GEICO, and it uses the insurance premiums it collects to finance acquisitions and other investments. Over the years, Berkshire has built up an impressive portfolio of fully owned companies, including Fruit of the Loom, NetJets, Dairy Queen, and The Pampered Chef.

In addition, the company has a stock portfolio that most retirement investors would love to get a piece of. Berkshire owns shares of about 50 solid companies, including large stakes in American Express, Coca-Cola, and Wells Fargo.

Finally, perhaps the best reason you don't have to worry about Berkshire is its extremely shareholder-oriented management team, led by Warren Buffett himself. And don't stress too much about the fact that Buffett won't be at the helm forever. He's leaving shareholders with some of the best managers and stock pickers in the business, and is putting safeguards in place to assure the company's interests are protected.

How to find your own
Of course, the stocks in this article aren't the only ones that make excellent retirement investments. Plus, three stocks are not nearly enough for a properly diversified portfolio, no matter how safe the individual companies are.

However, the basic principles that apply to these choices can be applied to your search for other great retirement stocks. Just ask yourself the same questions, such as "what happens to this company's earnings during a recession" and "is there any reason to think the dividend and earnings won't keep growing", and you'll be able to construct a well-rounded portfolio of retirement stocks that lets you sleep well at night.