What: Argus Research on Tuesday reiterated its buy rating on Nike (NYSE:NKE) and raised its price target to $116 from $110. Shares of the athletic-apparel specialist closed the day down 0.8%, at $100.65.

So what: In outlining its bullish thesis for Nike, Argus stated:

Over the long term, we expect Nike to continue to dominate the athletic apparel and footwear market, and note that it has a particularly strong presence in high-end footwear thanks to its marketing strength and endorsements from famous athletes. Although the industry remains fiercely competitive, we expect the company to build on its dominant position through its globally recognized brand, innovative products, economies of scale, and rapid growth in emerging markets.

Now what: I don't necessarily disagree with Argus' assessment. Indeed, the market seems to have been on board with (some variant of) this thesis during the post-crisis period, with Nike's stock trouncing the S&P 500 since the market bottom in March 2009, more than quintupling in the process: 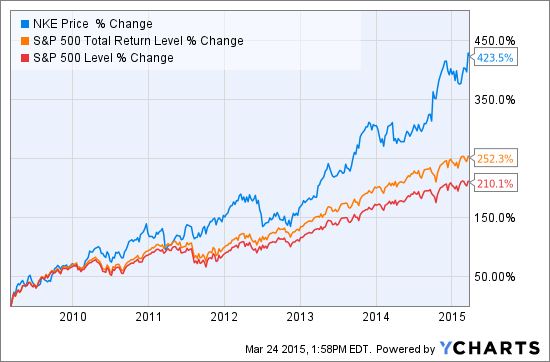 However, Argus' rosy scenario may not properly account for the competitive risk Nike currently faces (although the analyst does mention that "the industry remains fiercely competitive"). Specifically, I think rising rival Under Armour (NYSE:UAA) presents a threat to Nike's franchise the likes of which the "swoosh" brand has not seen since it went up against Reebok in the "sneaker wars" of the 1990s.

Interestingly, where Nike started out making running shoes before branching out into apparel, Under Armour has taken the opposite route. However, Nike can't afford to underestimate this threat -- even to its dominant footwear business. Broker FBR & Co. published a report last week in which it concluded, based on a survey it commissioned, that "when adjusting brand preference for relative market share size, UA was the leader in both basketball and running [footwear] (an indicator of brand potential)."

Another risk relates to Nike's valuation: The expansion in its price-to-earnings multiple has outpaced earnings growth since March 2009. As a result, at 25.6 times the consensus estimate for fiscal 2016 earnings per share, the shares now trade at a massive premium to the S&P 500 (equivalent multiple: 16.6). Large-cap stocks, which the S&P 500 represents, don't look particularly cheap as it is, and Nike looks frankly pricey. In my judgement, the shares will struggle to outperform over the next five years.