If you're following electric-car maker Tesla Motors, Inc. (NASDAQ:TSLA), you've probably heard of its Superchargers. This rapidly expanding network of charging locations is enabling long-distance travel in the Model S in the U.S., Canada, Europe, Australia, China, and Japan. Capable of delivering a charge of up to 120 kilowatts of direct-current power directly to the battery, these fast-charging locations are an absolute game-changer in the Tesla ownership experience. Already, 90% of the U.S. population is within 175 miles of a Supercharging location, close enough to get access to the countrywide charging network.

What you may be less aware of, however, is Tesla's newer, faster-growing charging network: Destination Charging. Since this network of chargers is newer and less capable than Superchargers, its important implications have been overlooked. But new comments from Tesla CEO Elon Musk and an examination of the Destination Charger network's wild rate of expansion are painting a clear picture of Tesla's vision for what this network could look like in the coming years. And the extent of this vision highlights a bigger story: Tesla doesn't want charging to be as convenient as filling a gas tank, it wants charging to be more convenient. 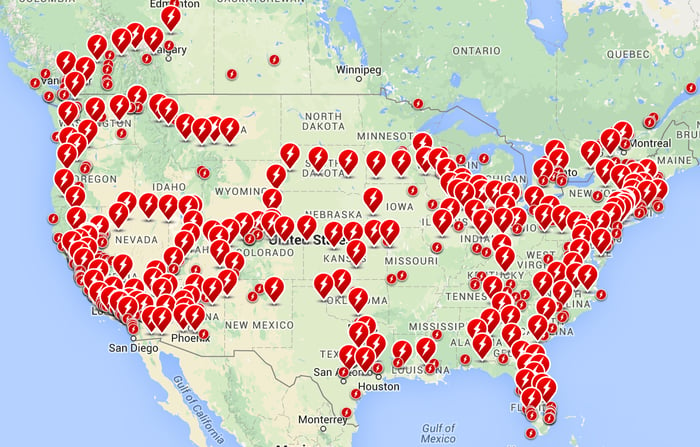 Here's what you need to know about Tesla's Destination Charger network and what it means for Tesla's plan to make charging easy.

Destination Charger locations use Tesla's Wall Connectors. Designed for 208- to 250-volt power supplies, these chargers can provide a charge rate of up to 58 miles per hour for Model S equipped with a second onboard charger or about 29 miles per hour for those with a single onboard charger. While these charge rates are not nearly as fast as the 130-mile charge in as little as 20 minutes that's possible with Superchargers, it's enough for a nice boost while eating at a restaurant or shopping and enough for a full charge overnight while visiting a hotel.

Tesla's plan for destination charging
Although Tesla began rolling out its Destination Charger locations during the second quarter of 2014, it is only in recent months that the company has begun to provide a glimpse into just how ambitious its plans for the program are. Not only does Tesla expect locations to eventually be widespread, but it also wants to get to this point quickly.

Musk also took the opportunity during the press conference to explain Tesla's program for installing Wall Connectors free of charge:

I should have mentioned an ongoing program we have where any hotel or restaurant that has Model S customers as clientele can actually request a Wall Connector charger from Tesla and it will be provided at no cost, provided they put their charging location in a, sort of, prominent and convenient location at their hotel or restaurant.

This program has been ongoing for several months, Musk said.

Destination Charger locations are expanding at a rapid and virtually exponential pace. In August 2014, there were only 106 locations globally. In January, Tesla had about 350 locations. Last week, Tesla said it had reached 902 locations -- 429 in North America and 473 in Asia-Pacific. At these locations, there are a total of 1,645 Wall Connectors.

Tesla confirmed with The Motley Fool that it continues to add new Destination Charger locations every day, and said in its fourth-quarter letter to shareholders that it intends to expand the program to Europe in Q2 this year.

Win-win economics
The economics for installing Wall Connectors are compelling for both Tesla and businesses.

While it's unclear how much a Wall Connector costs Tesla, the expense is likely nominal. The company charges $750 for a Wall Connector on its website. The added value for Model S owners and prospective buyers achieved by giving away Wall Connectors almost certainly is worth the cost of the charger.

What about the costs for businesses installing and maintaining Wall Connectors? For power supply installation, costs could range from as little as $500 to as much as $10,000, depending on the complexity of the project. After installation, per-customer costs are easily justifiable. While electricity costs vary from state to state, based on the national average $0.12 per kilowatt-hour, businesses that offer overnight charging spend about $8 of electricity for a 200-mile charge. In an hour-and-a-half stay at a restaurant or shopping center, owners can charge about 45 to 90 miles (depending on whether the Model S is equipped with a second onboard charger) at a cost of about $1.80 to $3.60 to the business.

To explore the Wall Connector economics for businesses further, I reached out to two businesses that have chosen to be a part of the network: first, Marcus Corp's (NYSE:MCS) Marcus Hotels and Select Registry, a marketing outreach program for a portfolio of more than 300 independently owned bed and breakfasts, or B&Bs.

"I have no doubt that having a charging station works out economically," Marcus Hotels' Chief Operating Officer Joseph Khairallah said. Thirteen out of the company's 20 hotels have installed Wall Connectors.

Khairallah said that costs for installing the power supply for Wall Connectors are probably no more than $3,000 per hotel. And providing ongoing free electricity to customers who charge their Tesla vehicles is a convenience Marcus Hotels is happy to offer. Free charging for Tesla owners is just another amenity in a suite of customer touchpoints aimed at providing an excellent customer experience, he explained. Khairallah also noted that there are marketing benefits beyond the Tesla owners its free charging attracts: Offering charging for Tesla owners portrays "high-tech" and "innovative."

Over the long term, Khairallah says Marcus Hotels is also keeping an eye on the progression of solar technology, which he believes could potentially help reduce hotel energy costs in the future.

To get a perspective from smaller businesses, I conferred with Select Registry Director of Marketing Renee Flowers. The independently owned inns, B&Bs, and small hotels that have qualified to be counted as a Select Registry property are aggressively installing Destination Chargers, with more than half already signed up for the program.

Flowers explains that its portfolio of properties, which are vetted in a rigorous, 200-point quality assurance inspection to qualify for membership, view Destination Chargers as an opportunity to provide a higher level of service to visitors who own a Model S. Furthermore, Flowers notes that offering convenient charging is a way for its independently owned properties to market to Model S owners, who Flowers says exemplify many of the characteristics of its inns, B&Bs, and small hotel's' typical customers.

"With fast charging now available, drivers can fully recharge their vehicle for the return trip while they are enjoying our hospitality," Maclaren said. "As a Green Hotel in the Green Mountain State we are excited to help facilitate zero-emission travel."

To show how Destination Charging is enabling greater convenience for Model S owners, Maclaren noted that West Hill House recently hosted a new Model S owner coming from Toronto, Canada, who stopped at the B&B on his way to Boothbay Harbor in Maine. The charging at West Hill House helped make the Canadian's trip possible.

Businesses with Destination Charger locations may get a boost beginning this week when Tesla begins to roll out its latest software update. With Tesla software version 6.2, destination chargers will now appear in the Model S navigation system alongside Superchargers.

The big picture
The compelling economics of Destination Charging combined with Tesla's ability to roll out the network so rapidly is a testament to just how easy it is to build the infrastructure for electric vehicles (at least when electric vehicles get 208-plus miles of range).

Rapid expansion of Tesla's charging network will continue. As Destination Charging locations work their way to outnumbering Superchargers 10 to 1, Tesla plans to add more new Supercharger locations this year than ever before. Tesla says it will double the network of Superchargers in 2015. Furthermore, during the press conference last week, Tesla said it will aim to prevent waits at Superchargers by always sizing its locations to handle times of peak demand.

The most critical part of the solution to charging, of course, requires no significant infrastructure feats at all. As likely any Model S owner would attest, the majority of the ownership experience is powered by home charging. With battery capacity for range between 208 and 270 miles, Tesla aimed to solve most of the charging infrastructure issue from day one by making out-and-about charging only necessary during long-distance travel.

Tesla will likely face a number of significant challenges as it attempts to increase annual vehicle deliveries from about 32,000 in 2014 to its target of 500,000 vehicles per year by 2020 with the help of its planned Model 3. But building out a formidable charging network isn't likely to be one of these major challenges. Indeed, with the convenience of being able to charge while you sleep and charge at increasingly more destinations while you relax, eat, or shop, charging infrastructure could eventually become an advantage of going electric.