For a long time, IBM (NYSE:IBM) kept its Power processors to itself. The only way to buy a Power-based system was to buy it directly from IBM, and when this business model worked, it generated hearty profits for Big Blue.

But things have changed. Intel (NASDAQ:INTC) has built a near-monopoly in the server chip market, making its x86 architecture the standard, and generated outsized profits in the process. Sales of IBM's Power servers have declined, and the company has been missing out on the boom in demand from cloud computing providers.

The birth of OpenPOWER

In late 2013, IBM changed course. Along with partners including NVIDIA and Google, IBM started the OpenPOWER Foundation, contributing its Power architecture and related intellectual property. The goal was to open Power technology to partners, creating an ecosystem around Power that could compete with Intel. The OpenPOWER Foundation now has 113 members, and the group's first products are expected to launch during the second quarter of this year. 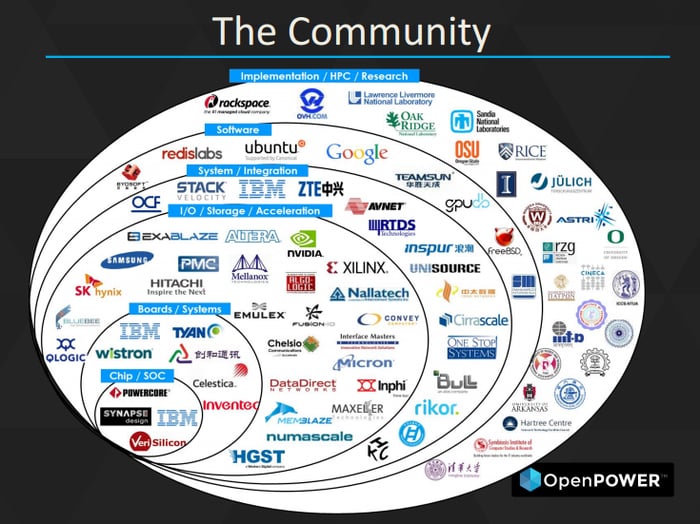 I've argued before that OpenPOWER is the biggest threat to Intel in the server market. But the threat might be even more pronounced in China, where the government has actively sought to reduce the country's dependence on foreign technology, pushing for homegrown products to replace those from multinationals.

IBM's shift in strategy allows Chinese companies to build Power servers and even Power chips, likely a more palatable option than buying hardware directly from an American company. China represents a major opportunity for IBM to increase the relevance of the Power architecture in the data center, and Intel is directly in Big Blue's crosshairs.

Starting to bear fruit
The first Power server from the OpenPOWER effort will come from Taiwanese server manufacturer Tyan. The server will be a two-socket system targeting both Internet service providers and cloud providers, and it's expected to be available during the second quarter of this year.

This server will likely be far less expensive than Power servers built by IBM, allowing Power to reach customers that previously would have balked at the high price of IBM's products.

This doesn't mean IBM will stop building its own Power servers, however; the company plans to launch an OpenPOWER server called Firestone, which includes NVIDIA's GPUs for acceleration, targeting the high-performance-computing market.

Along with putting its Power chips into third-party servers, IBM is also licensing the Power architecture, allowing companies to design and build their own Power chips. This is similar to the business model of ARM Holdings, which receives a royalty from each ARM chip sold.

The first company to design a custom Power chip is China's Suzhou PowerCore. The chip will launch during the second quarter, and it will show up in a server being targeted at the local Chinese market.

The opportunity in China
In 2014, $23 billion worth of servers were imported into China, according to Zhu Yadong, chairman of Suzhou PowerCore. There's certainly an incentive in China to control as much of the technology that it uses as possible; revelations over the past couple of years regarding the National Security Agency's data collection activities have increased Beijing's distrust of American technology companies.

This threatens to hurt all American server companies, including IBM, but if the trend toward local technology continues in China, Big Blue is now perfectly positioned to take advantage of this shift. On the other hand, Intel keeps its intellectual property close to its chest, and it's doubtful the company will ever license its chip technology.

IBM has the opportunity to displace Intel in the Chinese server market, although those efforts are still in the very early innings, and certainly not guaranteed to succeed. It will take solid products that are competitive on price and performance, and IBM will likely also have to compete against ARM-based servers.

But if there's any market where OpenPOWER can succeed, it's China. In the United States, the initiative has made some progress, with Rackspace building Power servers in order to offer a new bare-metal cloud computing service, for example. But it seems like the setup for IBM in China is almost perfect. Intel should be worried.