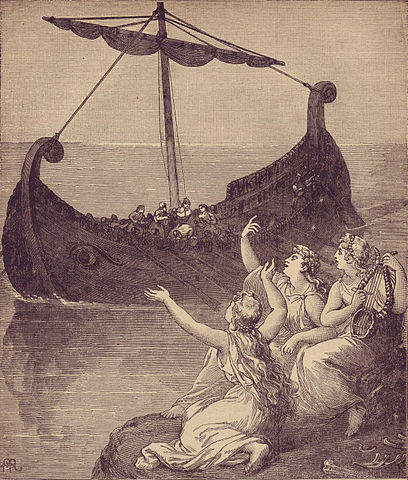 The ancient Greek story of Ulysses and the Sirens is of great interest to behavioral researchers. In case you're not familiar, Ulysses the explorer is cautioned against sailing past a particular point because the Sirens, who live there, have such a beautiful song that sailors feel compelled to land their ships. Which sounds fine -- except the coastline is so rocky that instead of landing, they die.

Ulysses determined that he could not miss something so incredible, but he didn't want to kill himself and his crew to experience it. So he stuffed everyone else's ears with wax to deafen them and had himself tied firmly to the ship's mast so that he couldn't redirect the ship. Thus they were able to sail past the Sirens safely, and Ulysses still got to hear the song.

Ulysses was successful because he realized that he was just as susceptible to losses of willpower as any other man, heroic though he may have been. So, instead of trying to overcome the temptation to steer toward the Sirens, he simply made it impossible.

If you've been struggling to stay on track with your New Year's resolutions, you might be wondering if there's some kind of figurative mast you can tie yourself to in order to force yourself to stick with the program. Luckily, there is.

Modifying your environment
Just like Ulysses, you can modify your environment to force yourself to stick to your goals. It might sound excessive, but the fact is that willpower is a limited resource. That means that it will take a lot less effort to just tie yourself to the mast than to avoid the temptation of turning the wheel.

If you want to spend less money, think about ways to make it impossible to spend more. What if you gave yourself a strict cash budget for the month, or froze all your credit cards into ice blocks so you couldn't use them (the latter idea is from a story told by behavioral research titan Dan Ariely)? Another way to avoid temptation is to use separate bank accounts, or even separate banks, to keep reserve money as far away as possible from spending money.

In this case, you'll want to find a way to limit yourself without relying on willpower. For example, if you want to go out for drinks with all of your old college friends, commit yourself to a certain budget by only bringing cash, or ask someone reliable to cut you off after a certain number of drinks (what are spouses for?).

For those everyday expenses -- which often represent hard-to-break habits -- you'll need to make a bigger effort to change direction. When it comes to something like not buying lunch at work, you might need to take drastic action, like the ice-cube credit card idea.

Make a contract
In an interview with magazine Public School Insights, Ariely said, "Every time we create a specific contract, we will get people to optimize a particular behavior." It might be a negative in the case of something as qualitative as "good education", but when it comes to financial behavior, that kind of specificity can help you.

It's not particularly glamorous, but what gets measured gets managed, so making a contract with someone who can hold you accountable is a good way of helping you to stay on track. Whether it's paying down debt by cutting back on unnecessary expenses or making headway on retirement savings, your contract should describe what you need to do, how you'll do it, and when it will get done. Also important? Rewards and costs -- you might be more of a carrot person or a stick person, but either one can help make enforcement more salient.

The other nice thing about contracts? They can help you take a big hairy problem and turn it into a manageable one. Finding a way to avoid the fallout of the Sirens' song is relatively simple -- can you imagine Ulysses trying to sign up for a 401(k)? But your contract can break it down, making the task easier to manage, and making yourself feel rather heroic in the meantime.

Gave Up on Your New Year’s Financial Resolutions? Try These Tricks Instead @themotleyfool #stocks Next Article
Current