Six years ago, the Dow Jones Industrial Average bottomed out at 6,469.95 points. Six years ago, everything was a lot cheaper -- the S&P's cyclically adjusted P/E, or CAPE, ratio fell to a 23-year low of 13.3 in March 2009, and it's since more than doubled to 27.9. Six years ago, investors found once-in-a-generation bargains that exemplified the old saw that "the best time to buy is when there's blood in the streets." So now, six years later, what's left to buy?

High CAPE ratios have been cause for alarm in conservative investing circles for years, but the way most bears use this metric is fundamentally flawed. In a recent discussion, Shy Datika, CEO of anyoption, noted:

Using CAPE to value the market based on the last 100 years makes the assumption that the market is static. But there are industries today that didn't exist 20 years ago, let alone 100 years ago. Analysts who try to fit the new wine in the old bottles end up doing more harm than good.

I've also argued against this century-plus use of CAPE, which averages valuations all the way back to 1881, in favor of a more modern view. However, CAPE is still historically overvalued today, whether you compare its current valuation of 27.9 to its 134-year average of 16.6 or to its post-modernization average of 19.9. Overvaluation should always be cause for caution, whether the CAPE ratio appears to be 68% or merely 40% above its long-term averages.

Finding good stocks in an overvalued market
The market may be overvalued on the whole, but that doesn't mean there aren't still good deals available for savvy investors. One time-tested way to ensure your portfolio holds up if the market returns to the mean is to buy stocks with the lowest valuations.

Fund manager David Dreman and his team found that, from 1970-2010, the stocks in the S&P 500 that ranked in the lowest quintile of P/E valuations outperformed those in the highest-P/E quintile by 15.3%-8.3% per year, when accounting for both share-price gains and dividend returns. Dividends from the lowest quintile stocks produced nearly half the annual gains (4.5%) on their own during this time as investors might have gotten from the total annual gains of the highest-P/E quintile stocks. Dreman also found that low-P/E stocks lost 5.2% of their value per quarter during bear markets, but high-P/E stocks fell by 9.5% per quarter during those periods.

A low-P/E stock doesn't even have to show earnings growth for its stock price to soar. A decade ago, GMO analyst Ben Inker found that companies with stocks among the 10% lowest P/Es on the market in a given year actually saw their earnings decline by 23% on average the following year. These lowest-P/E stocks nonetheless outperformed the indexes by 3% in those subsequent years despite their weakened fundamentals. Companies with the highest-P/E stocks in a given year grew their earnings by 26% on average in the following year, but expectations were so high for these stocks that they underperformed the indexes by an average of 2% despite their fundamental improvement.

With that in mind, let's look for some of the cheapest stocks on the market today that might become top performers over the next year. In addition to boasting some of the market's lowest P/E valuations, these three stocks are also trading at prices below their book values (price-to-book or P/B) -- another indicator of potentially market-beating returns.

Seadrill (NYSE:SDRL): 1.1 P/E and 0.5 P/B
Few stocks have suffered as much of a high-profile collapse over the past year as Seadrill, which is one of the beleaguered offshore oil and gas industry's most popular stocks due to its once-hefty dividend payment. That dividend has since been suspended as Seadrill's management scrambles to adjust to a world where oil costs half of what it used to, which hastened a shareholder exodus that's now slashed 70% off the value of Seadrill's stock. However, that decline has also pushed Seadrill's valuations down to all-time lows: 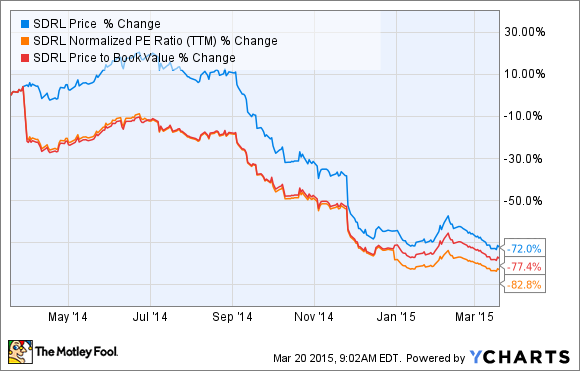 Low oil prices will hurt Seadrill's profitability going forward, but perhaps not as badly as many investors think. The company sports a minuscule forward P/E of four right now, and it continues to command one of the highest average dayrates in the offshore industry. Its backlog hasn't shrank as oil drillers around the world tighten their belts, which is an excellent sign when most of Seadrill's competitors are losing contracts left and right.

KB Home (NYSE:KBH): 1.5 P/E and 0.8 P/B
KB hasn't suffered as badly as Seadrill, but shares have fallen by roughly 25% over the past year as the market reacted to an underwhelming housing-market recovery. A slight dip in pending home sales in December sent KB's shares crashing, but they've since recovered thanks to a January pending-sales rebound, as well as two consecutive strong quarters (the company reported earnings for its February quarter that beat Wall Street's estimates this past Thursday): 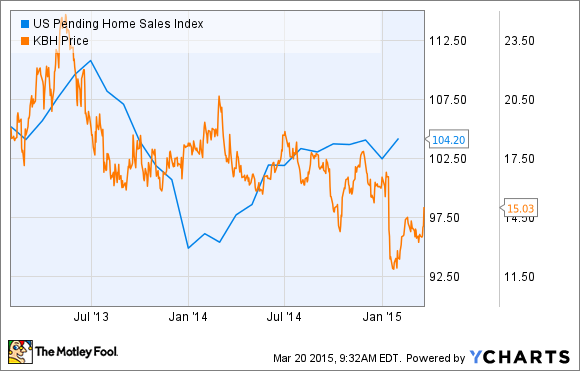 Unfortunately, KB's current rock-bottom valuation has been reached with clever accounting, as a whopping $823 million of its $918 million net income for 2014 came from one-time tax write-offs. Without that charge, KB's P/E would look more like 15.5 than 1.5, but KB's forward P/E ratio of 11.3 is still 60% lower than the market's overall CAPE.

Voya Financial (NYSE:VOYA): 4.9 P/E and 0.7 P/B
You might not be familiar with Voya Financial, but you probably remember ING, the Dutch megabank that spun off its U.S. operations as ING U.S. some time ago. That company has been rebranded as Voya and ING has divested itself of its remaining stake, but the market continues to treat the former ING U.S.'s shares with what might be described as extreme caution -- its P/E has fallen by 70% in the past year as earnings have skyrocketed: 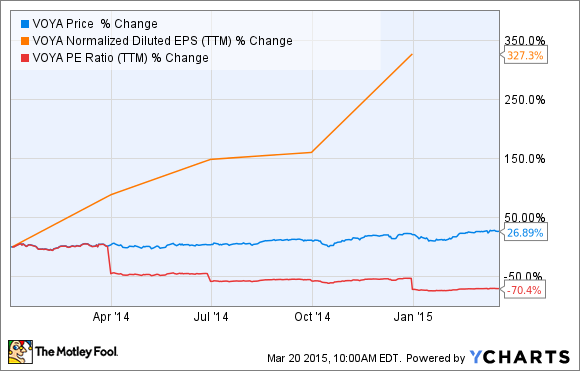 A 27% gain in one year is nothing to sneeze at, but market participants don't expect Voya's turbocharged growth to continue forever. Its forward P/E of 11.8 is close to KB Homes'. Wall Street clearly expects these two companies to slow down, but it's important to keep in mind that declining earnings don't actually matter for the lowest-P/E stocks, which as we've noted will usually beat the market after their valuations bottom out because expectations are already as low as possible.

And if any company knows the virtue of slow-and-steady, it's Voya, which manages a mutual fund called the Voya Corporate Leaders Trust Fund that's notable for having made no changes to its components since its inception 80 years ago. That fund, by the way, has outperformed 98% of its peers over the past five- and 10-year investment periods.