Please ensure Javascript is enabled for purposes of website accessibility
Log In Help Join The Motley Fool
Free Article Join Over 1 Million Premium Members And Get More In-Depth Stock Guidance and Research
By Eric Volkman - Mar 29, 2015 at 9:06AM

A pair of big names in the tech sector lifts their distributions, as does a noted REIT.

We're currently in the valley between earnings seasons, when companies report their latest quarterly results. Dividend declarations tend to be made around such times, so it's a bit unusual that we're continuing to see a healthy stream of news on the subject.

Luckily for investors in certain companies, some of those headlines concern dividend raises. Last week saw a handful of hikes, with two tech sector incumbents in particular making big declarations. There's no reason to keep you in suspense as to who the guilty parties are -- let's get straight to our trio for this week:

Oracle (NYSE: ORCL)
This database software giant doesn't like to do anything small, including dividend lifts. It's boosting its quarterly distribution a muscular 25% to $0.15 per share.

Oracle has obviously gazed into the glass and seen growth in its future. This might be due to the company's cloud software and platform as a service segment, revenues for which saw an impressive year-over-year increase of 30% in the most recently reported quarter.

That shakes out to $372 million, only a fraction of the company's $9.3 billion total top line for the period. But if Oracle can keep the positive momentum going in the segment, it could become a significant revenue driver in a hurry.

Even if it somehow doesn't, the company is a very large cash cow. It's enormously profitable, turning in net margins that have grown over time. 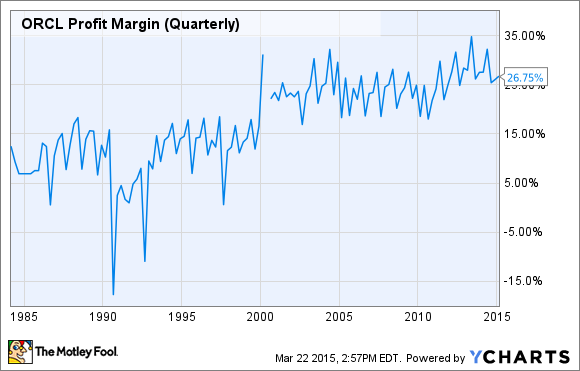 A business like this brings in boat loads of cash, more than enough to take care of the company's needs. In this past quarter, for example, its free cash flow was just under $1.9 billion, with total dividend payments amounting only $530 million. Even a 25% dividend raise is well affordable for the firm, now and probably as far into the future as it cares to keep up the payout.

Oracle's new dividend is to be paid on April 28 to stockholders of record as of April 7.

Hewlett-Packard (HPQ -2.87%)
Not content to let Oracle hog all the tech sector's dividend raise glory, HP will add nearly $0.02, or 10%, to its existing distribution. This will lift it to nearly $0.18 per share. The raise will not apply to the firm's upcoming payout, scheduled for April 1, but the one after that.

The timing of this feels off to me, though. HP has struggled to grow of late, with revenue sliding notably. It hasn't been particularly successful in mobile computing and cloud services, two hot segments of the IT market. The company is still too dependent on sales of hardware. 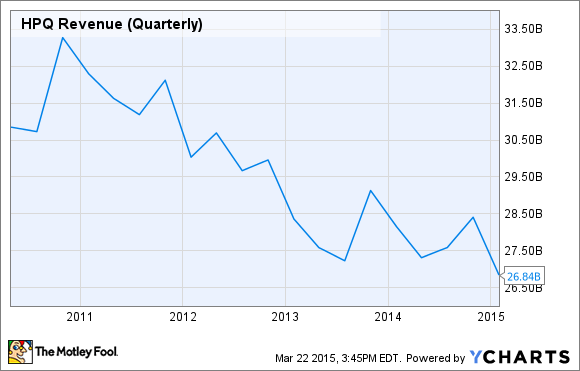 The firm is pinning its future hopes on a split of the company into two publicly traded entities.Meanwhile, it recently acquired Aruba Networks for a total of around $3 billion, in order to bolster its presence in the networking segment.

Splitting and acquiring are resource- and capital-intensive activities, and the success of either is far from guaranteed. If I were a shareholder, I'd much prefer that the company preserve its cash in case these moves don't pan out, rather than spend a little more on a dividend raise.

HP can certainly afford the distribution hike, because it still generates a lot of cash from its business. But it's questionable whether this is the most prudent use of its spare change.

The dates for HP's raised dividend should be announced in May.

Chimera Investment (CIM -0.85%)
It's rare to find a stock with a dividend yield in the double digits, and rarer still to find one that can maintain such an exalted level. One of the few and proud is this mortgage real estate investment trust, which just bumped its quarterly dividend 7% higher to just under $0.10 per share. This dividend will be paid for all of 2015's quarters. 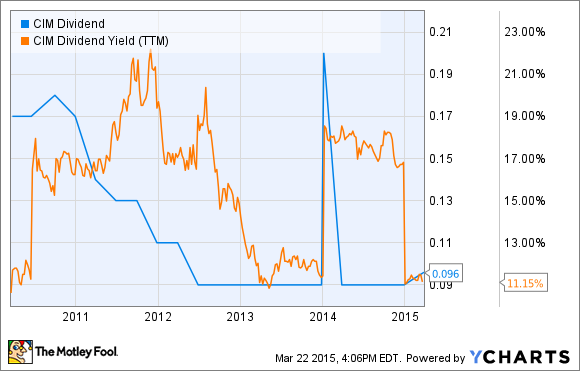 Chimera's done well in terms of its financials lately, with net interest income zooming to $540 million in fiscal 2014, from $410 million the year before.

The REIT is benefiting from the continued recovery in the U.S. housing market, but this improvement is also due to a quick and powerful expansion of its asset base, to over $19 billion from 2013's $6.9 billion. This was accompanied by an explosion in liabilities, however, to $15.5 billion -- several times over the $3.6 billion of 2013.

Although many of those liabilities are comparatively cheap sources of financing, the sudden ballooning of the balance sheet concerns me. The Federal Reserve is almost certain to raise interest rates in the (perhaps very) near future, which would negatively affect the performance of a great many mREITS.

As a result, I think investors should be cautious about mREITs in general, and this one in particular. A high dividend yield is tempting, but it's tough to maintain... particularly in an environment of raising rates and the squeezed profitability and cash flows that will probably result.

Chimera's raised dividend is to be handed out on April 30 to shareholders of record as of March 31. The stock is to undergo a 1-for-5 reverse stock split on April 6; the dividend will be adjusted accordingly.

Eric Volkman has no position in any stocks mentioned. The Motley Fool owns shares of Oracle. Try any of our Foolish newsletter services free for 30 days. We Fools may not all hold the same opinions, but we all believe that considering a diverse range of insights makes us better investors. The Motley Fool has a disclosure policy.