While Shake Shack has gotten a lot of attention from investors due to both its incredible growth prospects and lofty valuation, there is a different burger stock that should be avoided at all costs.

When burger chain Shake Shack (SHAK 2.27%) went public earlier this year, it did so at a valuation that turned heads up and down Wall Street. The company had 63 locations at the end of 2014, with annual sales of $118.5 million. Its market capitalization currently sits at about $1.7 billion, valuing the company at more than 14 times sales.

The bull argument for Shake Shack is simple: the potential for massive growth in store count over the coming decades makes the price paid today almost irrelevant. Chipotle (CMG 2.00%), for example, has become a $20 billion company since it went public in 2006, giving investors incredible returns despite the fact that Chipotle traded at sky-high P/E ratios in its early days.

The bear argument for Shake Shack is also simple: the company is barely profitable, unlike Chipotle, and if anything goes wrong as the company expands, the stock could collapse. Shake Shack will need to become the Chipotle of burgers and fries to justify its valuation.

Whether Shake Shack is overbought depends on the execution of its growth strategy in the coming years. There is merit in both the bull and bear cases, and the stock carries a huge amount of potential with an equal helping of risk.

There is another burger stock, however, one that is not followed nearly as heavily as Shake Shack, where the situation is more black and white. Shares of Sonic (SONC), known for its drive-in restaurants, have risen more than 350% since the beginning of 2012 and over 35% in the past year. 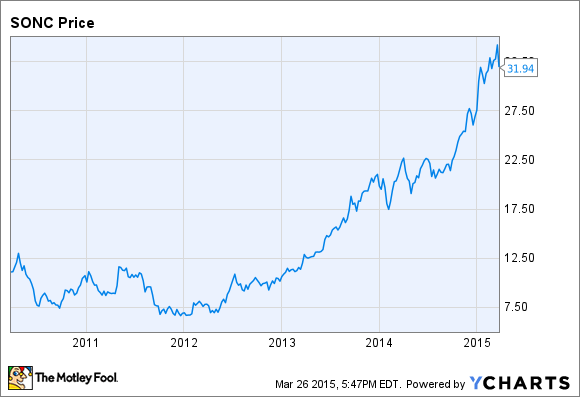 Sonic is grossly overvalued, trading at a P/E ratio of around 37 based on fiscal 2014 earnings, despite there being little in the way of a long-term growth story. Here is why investors should avoid this overcooked burger stock.

Great company, terrible stock
Sonic has consistently earned high profit margins, even during the recession. Its drive-in model is unique, and much like McDonald's, it franchises the vast majority of its restaurants.

But a great company does not make a great stock. Shake Shack sells for such a lofty valuation because there is the real potential for massive growth in the number of restaurants going forward. Sonic has been shrinking its store base since 2010. 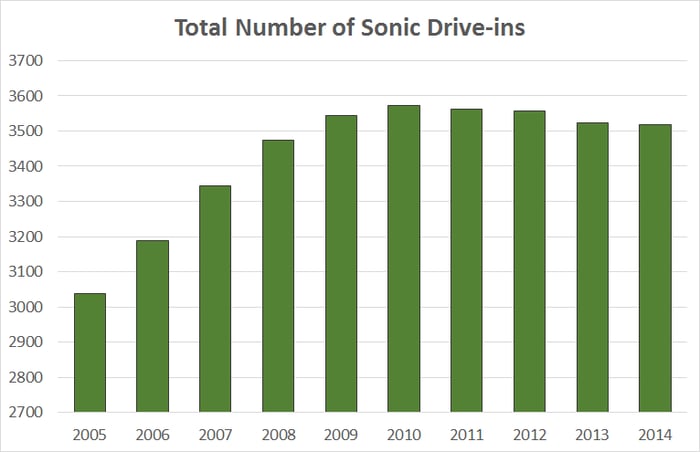 Even if Sonic were to increase its net store count by 100 locations each year, that would be less than 3% growth annually. Coupled with what will likely be low-to-mid single-digit same-store sales at best, mid-to-high single-digit earnings growth is likely the best investors can hope for in the long-term.

In the near-term, Sonic expects more rapid earnings growth. The company has guided for 25% to 27% earnings-per-share growth in fiscal 2015, helped by $105 million in planned buybacks and an impressive 11.5% same-store sales growth during the second quarter. The company does not expect these strong same-store sales to last, though, guiding for low-to-mid single digit growth for the rest of the fiscal year.

There is some room for Sonic to increase its margins, but without substantial store count growth, the kind of earnings growth Sonic expects this year will not last. Sonic would have to stop its aggressive share buyback program in order to open a meaningful number of new stores without taking on more debt, and there is already about $430 million in debt on the balance sheet. In 2014, interest payments consumed one-quarter of operating profit.

The current lofty valuation just does not make much sense. Chipotle, which has similar operating margins, expects to increase its store count by as much as 11.5% during 2015, while Sonic will grow its store count by just 1%. Yet, the company trades at a P/E ratio of 37 times, not far off from the 46 times Chipotle enjoys.

The growth story at Sonic is not nearly strong enough to justify the current stock price, and increasing buyback activity is a terrible idea given the high valuation. The fact that management thinks that paying 37 times earnings for its own shares is a better use of cash than opening new restaurants is a good reason to stay away from the stock.