Investors in 3D printing stocks: Here are 3 things to love about Stratasys -- and 3 things to hate.

Investors have a love/hate relationship with Stratasys (SSYS -2.50%) stock. Along with rival 3D Systems (DDD -2.99%), there are probably few better recent examples of stocks that have made some investors a lot of money quickly, and lost other investors a great deal of money even more rapidly.

Those who bought Stratasys stock prior to 2012 and sold in 2013 or 2014 made anywhere from a great return to a killing. Most of those who bought prior to 2010 and hung on are still sitting on gains despite the plummet that started as the calendar flipped to 2014. Meanwhile, those who bought during the 2012-to-early 2014 frenzy have watched their investment's value nosedive. 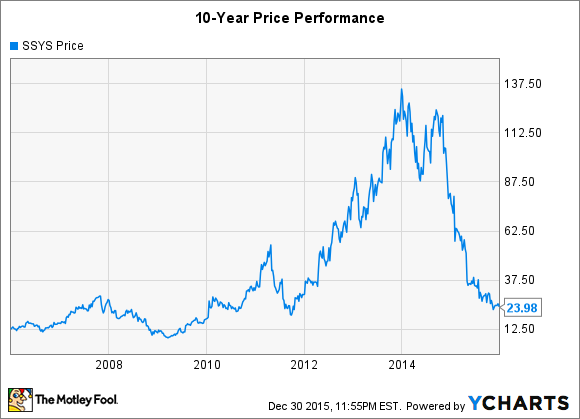 Here's what to love -- or at least like -- and hate about Stratasys' actual business:

1. It's one of the two co-first-movers in the industry
Along with 3D Systems, Stratasys is a first-mover in the 3D printing industry. Oftentimes, but far from always, first movers enjoy a long-term competitive advantage.

Stratasys was founded by Scott Crump and his wife Lisa in 1989, three years after 3D Systems was launched. Crump served as the company's CEO until its 2012 merger with Objet, when Objet's CEO David Reis took over the reins of the combined entity. Crump currently is Stratasys' chief technology officer and chairman of the board of directors.

2. Its unique Objet Connex line of 3D printers
Stratasys' Objet Connex printers, which use the company's proprietary PolyJet technology, are quite unique and garner high praise from users. These printers are geared toward advanced prototyping applications, though they also have select short-run production uses.

Notably, the Objet500 Connex3, released in early 2014, was the world's first 3D printer that could print in multiple colors and materials. Stratasys experienced robust demand for this printer throughout 2014, though sales have been affected by the overall industry slowdown in 2015. Connex printers are favored among the entertainment industry, which is increasingly embracing 3D printing to make props and costumes for films, theatrical productions, and concerts. An Objet500 printer, for instance, was used to make various pieces for Disney's Marvel blockbuster Guardians of the Galaxy, released in 2014.

3. Its tax advantage due to its foreign headquarters
This point seems to fly under the radar of many investors. After Minnesota-based Stratasys merged with Israel-based Objet in late 2012, the combined entity continued to maintain corporate locations in both countries, but deemed Israel its official corporate headquarters. Israel has a lower corporate income tax rate than the United States, which helps Stratasys' bottom line.

3 things to hate about Stratasys:

1. Its decreasing profitability
Like 3D Systems, Stratasys upped its growth game beginning in 2014. Its strategy was to sacrifice short-term profits for increased spending aimed at capturing market share and fueling long-term growth.

Well, the decreased profits certainly arrived. The drop in profits, however, was not just due to Stratasys' increased spending on growth initiatives. Stratasys' consumer-facing desktop 3D printer unit MakerBot imploded in the fourth quarter of 2014 due to widespread issues involving faulty extruders on the fifth-generation Replicator. This led not only to plummeting revenue, but also to a series of goodwill writedowns, which negatively affected earnings.

Additionally, Stratasys' core enterprise business, which had been growing nicely, hit a rocky patch in 2015. Stratasys has attributed the broad-based decrease in capital spending among businesses largely to overcapacity resulting from heavy spending on 3D printers in the previous few years. While this is no doubt the larger cause, it's a possibility that some businesses are delaying purchases to see what new offerings are on the near-term horizon. HP and well-funded start-up Carbon3D plan to release compelling printers for the enterprise market in 2016. 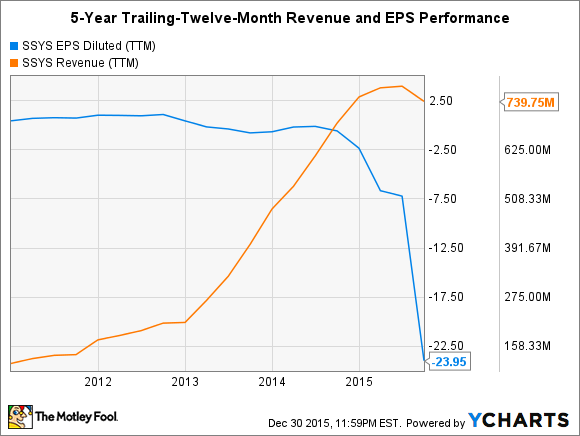 2. The trigger for the MakerBot implosion
Stratasys' management had been executing well (or seemingly so) through the third quarter of 2014. That came to a halt in the fourth quarter of 2014, when MakerBot's year-over-year revenue growth slowed considerably, leading Stratasys to take the first of three goodwill impairment charges in 2015 for it.

We can expect that most companies are going to experience occasional execution hiccups, especially those occupying fast-growing spaces that are rapidly scaling up. However, the trigger for MakerBot's woes is concerning: a rash of faulty extruders resulting in returns and lost sales. This issue suggests that Stratasys released its fifth-generation Replicator without doing a thorough quality-control job. Let's hope this proves to be an isolated incident.

3. It doesn't sell metal 3D printers
The metal 3D printing space is growing rapidly because 3D printing is increasingly moving beyond prototyping and into actual production applications. Stratasys doesn't sell printers that have metals capabilities, whereas 3D Systems does, thanks to its acquisition of Phenix Systems in mid-2013.

Stratasys will eventually need to offer systems that can print in metals if it wants to maintain its industry leadership position over the long term, in my opinion. Moreover, a strong metal 3D printer lineup would help better insulate it from competition from HP and Carbon3D, both of which plan to enter the enterprise market in 2016 with compelling polymer printers.

Wrap-up
There's been much more to dislike than like about Stratasys in 2015. MakerBot is likely to be a drag on earnings for some time, perhaps even forever. Stratasys' core enterprise business had been performing well until 2015, when capital spending among businesses significantly slowed. While the capital spending environment will surely improve at some point, Stratasys will also likely be facing increased competition from well-funded competitors when that happens.

Beth McKenna has no position in any stocks mentioned. The Motley Fool recommends 3D Systems and Stratasys. We Fools may not all hold the same opinions, but we all believe that considering a diverse range of insights makes us better investors. The Motley Fool has a disclosure policy.

3D Systems vs. Stratasys: Which Had the Better Q1 Earnings Report?
420%