Things are looking brighter for flooring special Lumber Liquidators ever since it found out it was under investigation. Photo: Wikimedia Commons.

Normally, an announcement that Lumber Liquidators (NYSE:LL) was under investigation by the Consumer Products Safety Commission wouldn't propel its stock 10% higher. However, that news was really the best thing that could have happened to the flooring specialist in the wake of the devastating 60 Minutes report on the health risks posed by its wood flooring.

This new investigation could potentially allow Lumber Liquidators to restore its reputation, which was shredded by the CBS news magazine.

Floored by the accusations
Although it took Lumber Liquidators a bit of time to respond to the allegations made against it, when it did make a statement the flooring specialist came out swinging. Not only did it stand by the quality of its products, stating that they complied with all relevant regulations, but the company tore into the tests that were conducted to prove otherwise.

According to Lumber Liquidators, because formaldehyde is a naturally occurring chemical, it's going to be found in the home and in many household products, including its own laminate flooring. But the chemical breaks down over time and doesn't accumulate in the environment or the body so it is of little risk.

Lumber Liquidators will be carrying a heavy load of suspicion until its the CPSC renders its verdict. Photo: Mike Mozart via Flickr.

When first installed, its flooring can add about five parts per billion, or ppb, to the average household indoor air quality, which in urban areas ranges up to 20 ppb. The EPA, however, sets an acceptable air quality range anywhere from 20 ppb-100 ppb, suggesting the laminate flooring isn't a hazard even when at its most potent, immediately after installation.

And because it breaks down over time, after just one year in use the formaldehyde emissions are cut by more than half, down to just two ppb. After 10 years, it's less than one ppb.

A question of testing methods
What 60 Minutes did was use a procedure called "deconstructive testing" that fundamentally alters the different components that comprise laminate flooring by mechanically removing the outer laminates and finishes to expose the MDF substrate. Doing so increases the amount of formaldehyde released and the news program found the flooring exceeded acceptable limits by 1,000% or more. 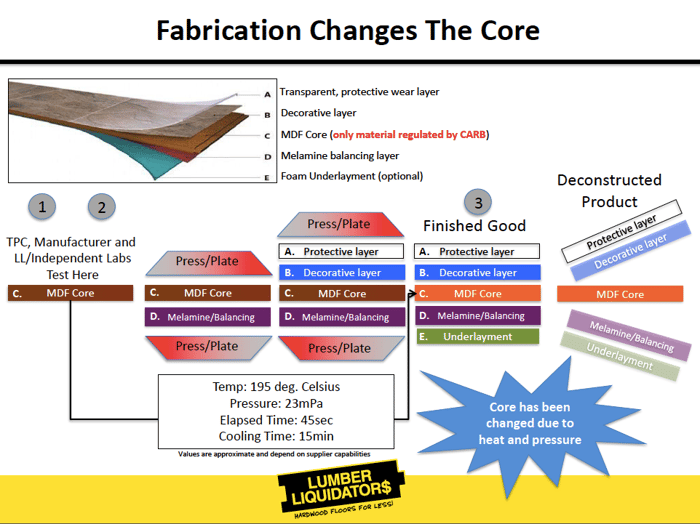 That's key because that testing method hasn't been validated by independent accreditation authorities. Testing the raw materials that go into making up a finished product allows for wide variations in results. By contrast, the regulations that Lumber Liquidators is required to follow don't call for such testing for compliance purposes; the duty they impose is to analyze how a product is actually used in a home.

And that's why the announcement that the CPSC is investigating Lumber Liquidators is important. The regulatory agency specifically said they will not be using the deconstructive testing that 60 Minutes employed, but rather would use a method that most closely replicates the way the products are used in the home.

Clearing the air
That's a huge win for Lumber Liquidators. Had the CPSC chosen to follow the more speculative path the news program followed, Lumber Liquidators might have had problems, if only from a public relations standpoint, because the tests may very well have corroborated the reports. But because it instead chose to test the flooring in the way most consumers would actually find the laminates and use them, it should validate Lumber Liquidators' position.

Lumber Liquidators is fully cooperating with the U.S. Consumer Product Safety Commission and has already provided a significant amount of testing and safety information to the agency staff. We have been in direct communication with CPSC staff over the past several weeks and expect them to review our products using sound science and test methods that evaluate finished flooring as used in consumers' homes. It is our firm belief that finished product testing, rather than deconstruction, is the best approach to determine consumer safety. We look forward to working with the CPSC on this matter.

The only drawback for the flooring specialist is the CPSC says it will take months, not weeks to get results because although it has the expertise to analyze the data, it doesn't have the equipment so it needs to contract out that work. That will allow these charges to hang over Lumber Liquidators for some time.

The agency also says not to look for some "bright line" demarcation of good and bad flooring because risk assessment doesn't work that way. It deals more in ranges, and though that should still work to Lumber Liquidators' benefit, it could also give the company's detractors an ability to say their sensational claims are still valid.

Those chips will fall as they will, but the Consumer Product Safety Commission's decision to analyze the laminates as they're currently regulated and how consumers would find and use them in the home is a big win for Lumber Liquidators. As a result, being under investigation by the agency is the best possible outcome of this debacle that Lumber Liquidators could have hoped for.