Shares of clinical-stage biopharma Agenus (NASDAQ:AGEN) have been on fire since the company acquired 4-Antibody in February 2014, allowing it to greatly expand its activities in the burgeoning field of immuno-oncology. Despite some recent weakness because of a sectorwide pullback, for example, the tiny biotech's shares are up over 70% since this key acquisition: 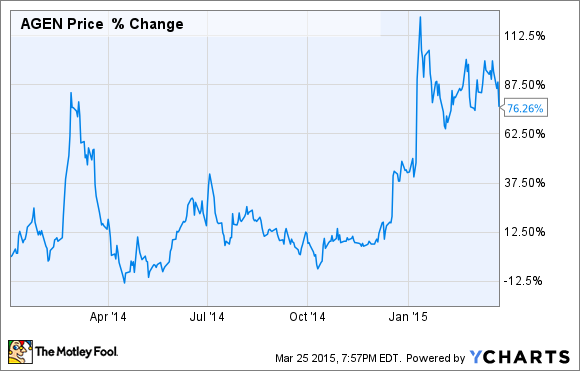 What may surprise some onlookers, though, is that there are good reasons to believe Agenus stock is still a compelling buy. Here's why. 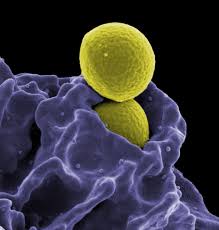 Immuno-oncology is the future
According to several internal forecasts from major companies working in the field, immunotherapies are predicted to compose upwards of 60% of all cancer treatments within the next decade. That's why AstraZeneca, Bristol-Myers Squibb, Merck & Co. (NYSE:MRK), and Pfizer are all racing to build out their immuno-oncology programs.

In terms of the commercial opportunity, some experts have estimated that immuno-oncology sales should reach $35 billion by 2024. AstraZeneca, though, has suggested that this figure could be much higher, estimating that its programmed death-ligand 1 compound, MEDI-4746, alone should generate a staggering $6.5 billion in sales by as early as 2023.

Given that Agenus' market cap is only about $350 million at present, the company would need to capture only a small fraction of this burgeoning market to be considered deeply undervalued.

Agenus is well positioned to be a major player in immuno-oncology
Agenus' immuno-oncology platform, consisting of its Retrocyte Display technology for antibody discovery and ready-made checkpoint modulator antibody candidates, quickly grabbed the attention of Incyte Corp. (NASDAQ:INCY) and Merck, with both pharmas signing lucrative research deals with the much smaller company.

Incyte, for example, signed up to co-develop drug candidates for four checkpoint proteins (GITR, OX40, LAG-3, and TIM-3), initially investing $60 million via cash and an equity stake in Agenus. Per the terms of the deal, Agenus could receive $350 million in milestone payments, along with royalties and/or 50% profit sharing from any net sales of drugs developed from the collaboration.

The Merck deal is worth up to $100 million in milestone payments plus royalties, with the companies targeting two undisclosed therapeutic targets.

Most importantly, Agenus will be able to build out its immuno-oncology program with the help of two major pharmas, which should greatly reduce the company's cash burn rate throughout the clinical testing process and any regulatory filings -- two key issues that typically haunt small-cap biopharmas.

Agenus does have other valuable assets that shouldn't be overlooked
Aside from its immuno-oncology program centering on checkpoint inhibitors, Agenus does have two other therapeutic platforms that the market is probably overlooking right now.

Specifically, the company is involved in the development of heat shock protein-based vaccines that are showing promise as treatments for glioblastoma multiforme (an aggressive form of brain cancer) and herpes.

And it developed the Saponin-based adjuvants for the late-stage vaccine candidates in malaria and shingles that are being developed by GlaxoSmithKline. So Agenus does have a fairly diverse clinical pipeline that gives investors multiple shots on goal, so to speak.

Is Agenus a strong buy right now?
While Agenus looks great on paper from an investment perspective -- especially after bolstering its immuno-oncology assets -- the company does have a troubling operating history that shouldn't be ignored entirely. Despite being in business for 21 years, for example, this biopharma has yet to churn out a major product, forcing it to operate deep in the red.

Since going public, its share price has thus been, quite frankly, an utter disaster for investors: 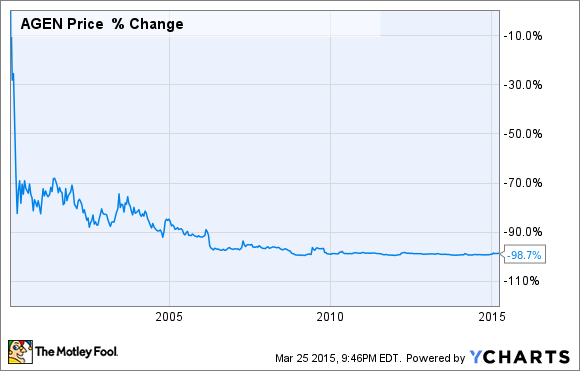 So the risks are most certainly real, which is probably why the market hasn't assigned much value to its immuno-oncology program or its other two platforms.

Until the company releases some reassuring clinical data for its immuno-oncology endeavors, this stock therefore might have trouble pushing much higher. That said, the research agreements with top biopharmas, Incyte and Merck, suggest that investors with a high risk tolerance may want to dig deeper into this speculative stock. After all, its upside potential now appears to me to outweigh the downside risk at present levels.

Why It's Not Too Late to Buy Agenus, Inc. Stock @themotleyfool #stocks $AGEN $MRK $PFE $INCY $GSK Next Article
Current