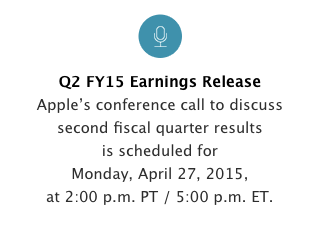 Apple (NASDAQ:AAPL) has announced the date for its fiscal 2015 second-quarter earnings report. Mark your calendars: On Monday, April 27, Apple will release its latest quarterly figures and host a live conference call to discuss the results. With Apple stock up about 15% since it reported record quarterly results in January and up 61% in the past twelve months, the market will be watching the world's most valuable publicly traded company closely when it reports earnings.

Analysts expect Apple's Q2 year-over-year EPS growth to exceed its revenue growth during the same period, reflecting the affects of Apple's aggressive share repurchase program as well as a year-over-year improvement in the company's gross profit margins. The consensus analyst estimate for Apple's second-quarter EPS is $2.12, up 28% from the year-ago quarter.

Apple Watch, guidance, and cash plans likely to take center stage
Though unrelated to the fiscal Q2, given that the report is scheduled the Monday following the first launch weekend of Apple Watch, Apple CEO Tim Cook may be swarmed with questions about how well the new product line sold over the weekend. While pre-orders for Apple Watch begin April 10, the watch isn't available to purchase and take home until Friday April 24.

Curiosity regarding Apple Watch will probably carry over to Apple's guidance. Investors will want to know whether the company's guidance range for third-quarter results factors in the potential sales from the Apple Watch -- and if it is factored in, to what extent? The Apple Watch will be available for purchase for over two months of the third quarter.

Along with quarterly results, an Apple Watch update, and guidance, Apple is also expected to update its share repurchase program. As fellow Fool Evan Niu recently noted, at Apple's average rate of repurchasing approximately $11 billion of shares every quarter, the company's authorized funds for repurchases are set to expire at the end of Apple's fiscal second quarter. And despite Apple's aggressive spending on repurchases -- not to mention the company's regular dividend -- Apple's balance sheet is robust enough to initiate a record capital return program if it wanted to.

Apple CFO Luca Maestri said during the Apple's first-quarter earnings call that it expects to update its capital return program when it reports second-quarter results.

Stay tuned at The Motley Fool for more pre-Apple earnings analysis as well as our Foolish take on the results after they go live.