There are fewer finer feelings in investing than waking up one morning to find one of your stocks is subject to a takeover bid. Not only does that usually come with a juicy premium, but it vindicates your view that the stock was a good value. With that said, what does the merger and acquisition landscape look like in 2015? Let's study this question in the context of a historic appraisal of the biggest deals in the industrial sector.

A brief history of the M&A environment
Mergers and acquisitions occur for all sorts of company-specific reasons, but   they are also heavily determined by economic and financial conditions. For example, older readers will remember how the emergence of junk bonds in the 1980s led to a boom in M&A activity as companies pursued leveraged buyouts. A slowdown in the economy and the collapse of the junk bond market led to a temporary moderation in deal activity, before a strong pickup in the 1990s.

From then on M&A activity became a kind of proxy for corporate confidence in the economy. For example, the sluggish economic recovery since the last recession has helped create a much more tepid recovery in M&A than occurred after the previous two recessions in 1992 and 2002. 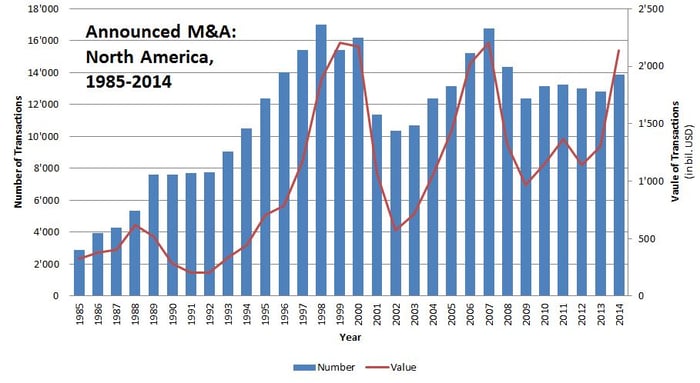 Moreover, many sub-sectors of the industrial sector -- which is typically as seen as one of the most economically sensitive -- have experienced declining M&A activity since the last recession.. For example, aerospace and defense. 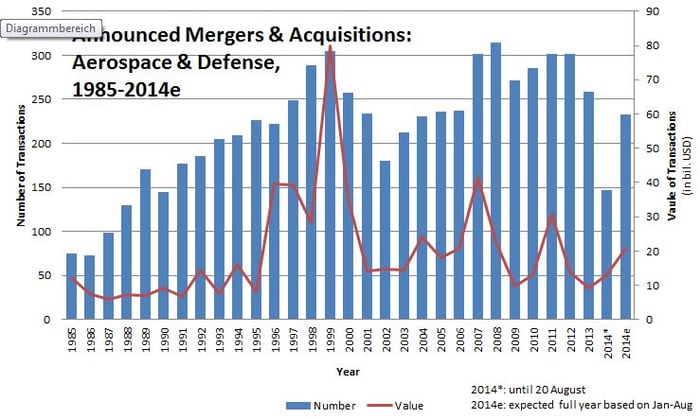 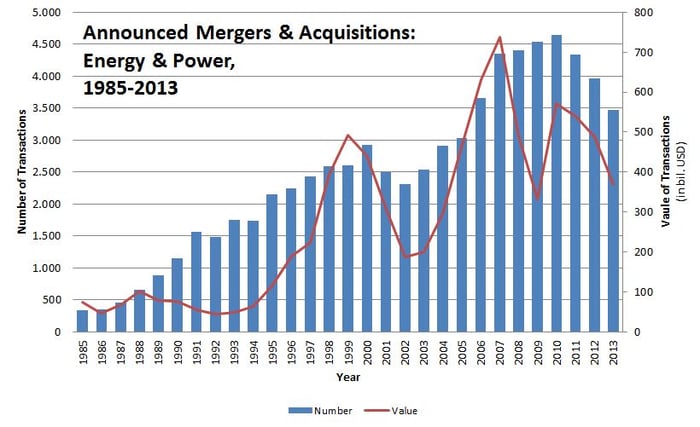 Going forward, I think there are a number of reasons why M&A conditions could improve in the industrials sector in North America.

Given that the industrial sector is typically seen as cyclical, it's reasonable to expect any pickup in general M&A activity--implying that CEOs are feeling more confident about the economy-- to see proportionally larger deal activity in the sector. Now, let's look at the type of deal likely to take place.

Industrial sector specifics
A good example of the kind of megadeal that investors can expect going forward is General Electric Co.'s (NYSE:GE) $13 billion bid for Alstom's power equipment business. As readers already know, the deal marked a renewed focus on GE's core, and most productive, major activity. It's also an attempt to generate cost synergies via industry consolidation,while opening up new markets -- Alstom is particularly strong in the emerging world. When companies merge or acquire others that compete or sell to similar customers in the same industry, it's usually referred to as a horizontal deal.

Another example of a recent horizontal megamerger is Eaton Corp.'s $11.8 billion takeover of Cooper Industries, which created a combined company with a far broader range of electrical power products.

United Technologies Corp. (NYSE:RTX) also looks likely to make a large deal in 2015, with CEO Gregory Hayes on record as wanting to make an acquisition above $5 billion, but it looks likely to be a different type of horizontal deal than GE/Alstom.

In a presentation earlier in the year, Hayes outlined an intent to buy complementary aerospace companies with "mechanically actuated systems." United Technologies took a similar approach in its 2012 deal to buy Goodrich for $16.5 billion; in that case, Goodrich's landing gear complemented United Technologies' engines (Pratt & Whitney).

Future deal activity
Putting this analysis together, M&A activity looks set to increase in the industrial sector. Furthermore, it appears likely that future mega-deals will involve companies in similar industries, whether the merger or buyout horizontal or vertical (a merger of companies in different levels of the supply chain). Indeed, a recent PwC report sees things in a similar way:

"Going forward, industrial manufacturers are expected to continue to carve out noncore businesses and pursue assets within markets where they already have leadership positions and competitive advantages"

The age of the huge cross-industry mega-mergers -- designed to create sprawling diversified conglomerates -- appears to be over. Instead, investors should look forward to more deal activity with industrial companies in similar industries involving cost synergy generation. Industry consolidation or the addition of complementary product lines are likely to be the key drivers, with companies like General Electric and United Technologies increasingly looking to grow their core businesses.