Procter & Gamble (NYSE:PG) is one of the most highly regarded dividend stocks. There's good reason for this, since P&G has a stellar history of rewarding shareholders with dividends. P&G has paid dividends for 124 consecutive years, dating all the way back to the company's incorporation in 1890, and it has increased its dividend for 58 consecutive years. 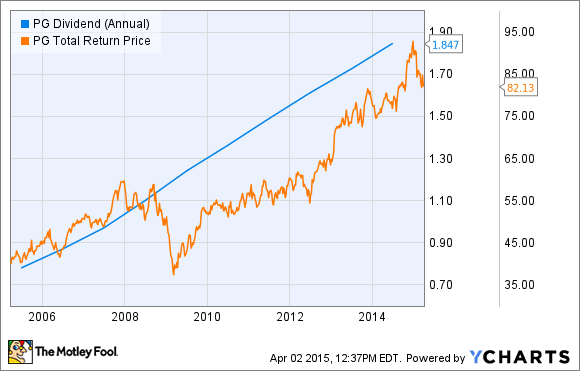 As you can see from the chart above, P&G is the epitome of a slow-and-steady dividend machine. P&G typically announces its annual dividend increases in early April, usually a couple of weeks prior to its fiscal-third-quarter earnings. P&G will announce quarterly earnings on April 23, meaning it's almost that time of year once again.

Headwinds may force a modest increase

P&G's payout ratio, or the percentage of profits the company distributes to investors as a dividend, has hovered around 60%-65% over the past few years. However, in the past year, P&G's payout ratio has increased significantly, to 77%. P&G's elevated payout ratio is due to a slowdown in its earnings growth, due to one key culprit: a severe currency headwind. The U.S. dollar has risen dramatically against other currencies including the euro, which is a big problem for U.S.-based multinationals such as P&G. The strengthening U.S. dollar makes international sales worth less when those revenues are converted back into the domestic currency. Since many huge companies, P&G included, conduct a majority of their sales overseas, this poses a challenge.

Indeed, 61% of P&G's sales in fiscal 2014 were generated outside North America. Because of unfavorable currency effects, P&G's net sales declined 4% last quarter. This was due entirely to a five-percentage-point impact from currencies. As a result, diluted earnings from continuing operations fell 9% last quarter, year-over-year. Because of this, P&G forecasts full-year earnings to be hit by currency, to the tune of a $1.4 billion after-tax impact.

Therefore, investors may need to temper their expectations for P&G's dividend increase this year. P&G's dividend growth had already slowed in recent years, and the currency headwind is just another roadblock. P&G raised its dividend by just 6% last year, which is below its average dividend growth rate in recent years. Over the past five years, P&G has increased its dividend by 8% per year. This is a common theme circulating throughout the consumer staples sector. Others, such as The Clorox Company, are also slowing the pace of dividend increases. Clorox increased its dividend by just 4% this year, which was significantly below its rate over the past several years.

It seems likely that P&G will deliver another modest increase this year, in order to keep its payout ratio from reaching an alarming level, and also as an acknowledgement of the difficult operating climate.

It's almost a certainty that P&G will want to keep its streak of annual dividend increases alive. The company is a Dividend Aristocrat -- a list the requires, among other things, a dividend increase every year for at least 25 consecutive years -- and has one of the longest histories of yearly dividend raises. Its investors take this very seriously; the dividend is one of the best reasons to own P&G stock in the first place. At current prices the stock yields about 3% on an annual payout of $2.57.

That's why I expect P&G to raise its dividend, albeit by a more modest amount than investors may be accustomed to. I believe P&G will deliver a 3%-6% dividend raise, in line with Clorox's most recent increase. In P&G's case, a $0.68 per-share quarterly dividend seems appropriate, which would represent a 5% raise.