Big U.S. corporations such as Apple (NASDAQ:AAPL), Microsoft (NASDAQ:MSFT), and Google (NASDAQ:GOOG) (NASDAQ:GOOGL) have accumulated tons of cash and earnings in foreign countries over the last several years, and now hold a colossal $2.1 trillion in profits abroad.

This money is parked outside the U.S. mostly for tax reasons, and it could provide a big boost to these companies in particular and the U.S. economy in general if the federal government provides a way to repatriate that money at a reasonable cost.

According to Credit Suisse, profits held at foreign countries by S&P 500 companies have grown at an average annual compound rate of 19% since the last tax repatriation holiday in 2005, reaching that stratospheric $2.1 trillion by 2014. 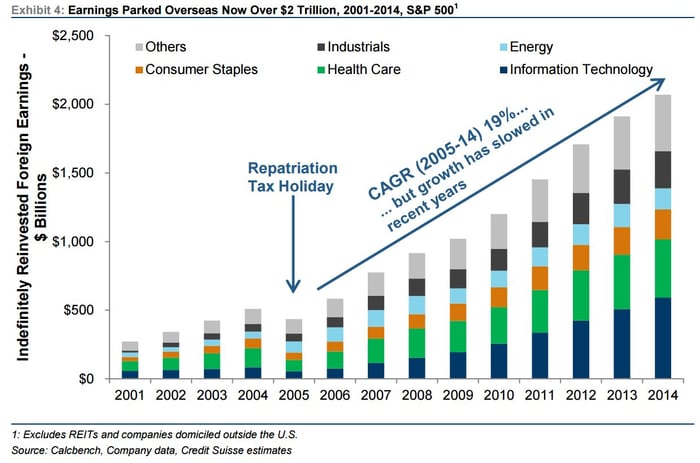 It's important to remember that earnings are not the same thing as cash; estimating cash reserves held abroad can be much more complicated, because companies are not required to disclose where their cash is parked. Credit Suisse found only 230 companies in the S&P 500 index that provided some idea about where their cash reserves are held; these companies hold more than $650 billion abroad, representing 64% of their total cash balances.

Based on data from J.P. Morgan, Apple is by far the largest accumulator of both international cash and earnings. Apple is estimated to have $69.7 billion in untaxed foreign earnings and $157.8 billion in cash and equivalents held abroad, representing 89% of the company's cash and liquid investments.

Microsoft comes in second place; the company has $82.1 billion in cash held abroad, which accounts for 91% of the company's liquid resources, according to J.P. Morgan. The company carries $92.9 billion in untaxed foreign earnings on its books.

Both Apple and Microsoft have used debt issuances to return capital to shareholders via dividends and buybacks without having to pay a huge tax bill to repatriate their foreign money.

Google has $64.4 billion in total cash and marketable securities, of which $38.7 billion is held abroad. The online search giant carries $47.4 billion in untaxed foreign earnings. In 2013, responding to an SEC inquiry letter regarding its foreign reinvestment plans, Google said it needed its foreign capital for acquisitions, capital expenditures, and intercompany charges.

Google also said it could easily access capital markets in the U.S., so the company did not see the need to bring its money back home under current conditions: "Considering our recent borrowing at very favorable rates, combined with our operational performance, and U.S. liquidity, we believe we can obtain additional funds in the U.S., if necessary, at low cost to us on the open market."

Finding a smart solution
The United States uses a worldwide tax system. This means that all profits earned by a U.S. company, no matter where in the world they are earned, are eventually subject to U.S. tax. However, the foreign profits of a U.S company's foreign subsidiary are not taxed until they are repatriated. This means companies can avoid U.S. taxation as long as they keep their foreign earnings parked abroad.

When a company claims that it has both the intent and ability to reinvest its foreign earnings indefinitely outside the U.S., it recognizes no domestic tax expense on that money. Many big U.S. corporations are reporting huge declines in their effective tax rates, hence increasing earnings, because of this factor.

Under current laws, those companies would pay a 35% tax rate to repatriate that money, so it makes little sense to expect that money back in the U.S. absent some kind of modification.

In the words of Apple CEO Tim Cook, during an interview with The Washington Post in 2013:

If you look at it today, to repatriate cash to the U.S., you need to pay 35% of that cash. And that is a very high number. ...We are not proposing that it be zero. I know many of our peers believe that. But I don't view that. But I think it has to be reasonable.

President Barack Obama's 2016 budget proposes a one-time 14% tax on all foreign earnings, whether they are repatriated or not. That would be in addition to a 19% minimum tax on future foreign profits. Under this proposal, companies would be allowed reinvest those funds in the U.S. without paying any additional taxes.

There are both pros and cons to this approach, and finding the best way to repatriate that money is a matter of hot debate. Both economic and political considerations are playing a major role in the discussion, so it's hard to tell how negotiations will advance in the middle term.

One thing is quite clear, though: Investors in big tech companies and the U.S. economy as a whole could benefit substantially from a solution, so politicians in both parties should do their best to find a smart and efficient to bring that money back.