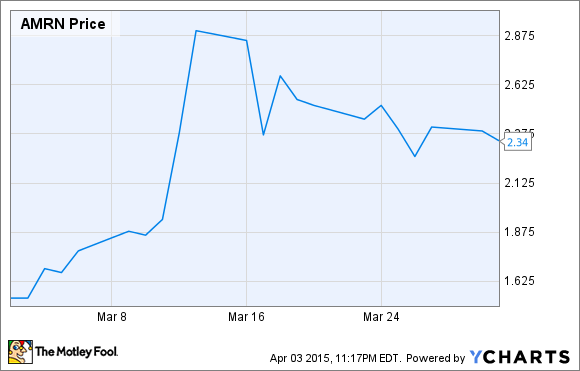 What: Shares of Amarin (NASDAQ: AMRN), a small-cap biopharmaceutical company focused on developing drugs designed to treat cardiovascular diseases, skyrocketed 55% in March, according to data from S&P Capital IQ, after reporting better-than-expected fourth-quarter earnings results and receiving a substantial upgrade from one Wall Street firm.

So what: In early March, Amarin announced its fourth-quarter earnings results, delivering $16.5 million in net product revenue from Vascepa, a high-triglyceride-reducing drug, which was a 17% improvement from the $14.1 million in revenue reported in the sequential third quarter. Full-year Vascepa sales grew by 105% to $54.2 million. Overall, Amarin lost $0.11 per share, $0.02 narrower than Wall Street had expected, and it further lessened its full year-over-year cash burn.

The other big news for Amarin was a huge upgrade from brokerage firm H.C. Wainwright which upgraded Amarin to "buy" from "neutral" and placed a whopping $10 price target on its shares -- or more than five times where Amarin closed the day prior to issuing its price target. H.C. Wainwright believes that in spite of the high costs associated with running its REDUCE-IT cardiovascular safety outcomes trial for Vascepa, as outlined by the Food and Drug Administration, a successful outcomes years down the road could lend to a label expansion of Vascepa to a greater percentage of high-triglyceride patients. Now what: The question that investors need to be asking themselves here is whether or not Amarin deserves its recent double in share price and could in fact head even higher, or if the uncertainties surrounding Vascepa warrant pessimism. Of course, there's something of a dual answer.

On one side Amarin has received multiple recent upgrades from Wall Street firms as its lowered its cash burn, boosted sales for Vascepa to very high triglyceride patients (500 mg/dL or higher), and moved forward with REDUCE-IT. Wall Street could be correct that Amarin's shares are cheap if REDUCE-ITs results are favorable.

But, the other side of the coin suggests that Amarin is going to experience steep losses and need to continuously raise cash at the expense of existing shareholders in order to reach a conclusion to the REDUCE-IT study, which isn't expected to yield publishable results until 2018. Even assuming a positive cardiovascular outcome we're looking at a likely 2018 supplemental new drug application filing, a potential 2019 launch, and another year before sales really ramp up. Trust me, I have no qualms about thinking long-term; in fact I encourage it! However, sitting around for four or five years while Vascepa remains confined to a tight gambit of the high-triglyceride population isn't a smart move in my opinion.

If I were one of the investors lucky enough to go along for this ride, I'd consider taking some of my gains off the table and watching Amarin safely from the sidelines instead.