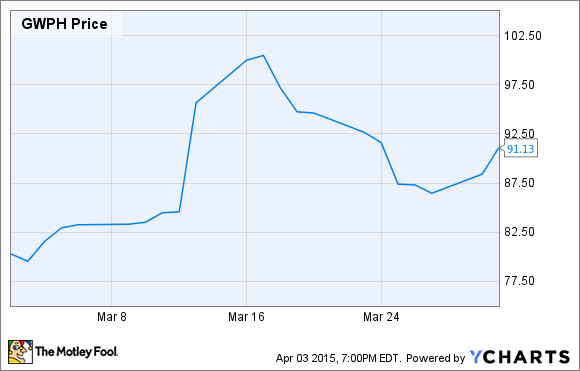 What: Shares of GW Pharmaceuticals (NASDAQ:GWPH), a biopharmaceutical company focused on discovering and utilizing cannabinoids from the cannabis plant in order to treat a variety of diseases and disorders, surged 13% in March according to S&P Capital IQ after three U.S. Senators introduced a bill to potentially end the federal ban on medical marijuana.

So what: Known as the Compassionate Access, Research Expansion, and Respect States Act, or CARERS Act, it would remove the federal ban on the use of medical marijuana and shift enforcement duty over to the states. It would also make three additional changes beyond just how laws are enforced.

First, it would require an amendment to the Controlled Substances Act and a rescheduling of marijuana from a schedule 1, or illicit, drug to a schedule 2 drug, re-categorizing it to recognize that it has medical benefits but is highly prone to abuse. Second, the act would open up the ability of banks to finance medical marijuana businesses. Finally, and most importantly for GW Pharmaceuticals, it would remove a number of hoops that drug developers have to jump through when researching the benefits of marijuana or cannabinoids. If GW Pharmaceuticals has fewer hurdles to climb, its expenses should fall and it could even expand its research pipeline.

With momentum from the public growing and Congress finally listening, investors are of the belief that the potential passing of the CARERS Act could be a big boon for GW and other marijuana-based stocks.

Now what: The real question investors have to ask themselves here is whether the potential passing of the CARERS Act really merits an additional $200 million-plus being added in market value last month.

Obviously, if the bill were to sail through Congress and be signed into law by the president in its current form it could be a benefit for GW Pharmaceuticals in terms of bringing its cannabinoid-based drug candidates more quickly from the lab to clinical trials. This should reduce expenses and give the company more opportunities to "hit one out of the park."

On the flipside, no amount of momentum can hide what have been generally disappointing results for GW Pharmaceuticals thus far. Its lone approved drug overseas is Sativex for spasticity associated with multiple sclerosis, and sales of the drug have been tracking well below Wall Street's original sales estimates for the drug. Also, Sativex failed to meet its primary endpoint in the first of three late-stage cancer pain studies in the United States. GW does have Epidiolex, which demonstrated solid results in midstage trials involving two types of rare childhood-onset epilepsy, but GW Pharmaceuticals is also staring at the real possibility of losses throughout the remainder of the decade.

Regardless of whether the CARERS Act passes or not I believe it's too early to consider investing in marijuana stocks like GW Pharmaceuticals. The scope of cannabinoids in terms of treating disease is still being worked out, and GW is nowhere near being cash flow positive. My suggestion is to avoid this emotional trade and look elsewhere for growth opportunities.