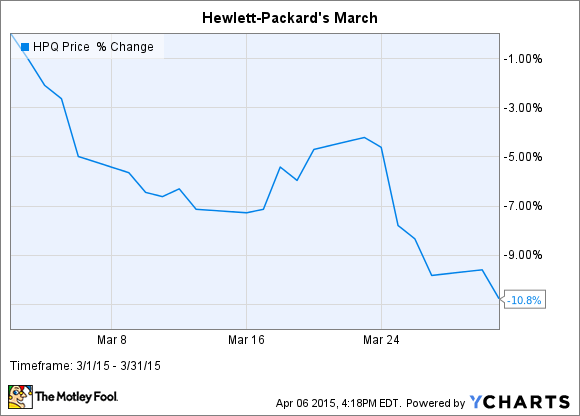 What: Shares of computer manufacturer Hewlett-Packard (NYSE:HPQ) fell 10.8% in March, according to S&P Capital IQ data, as the company's post-first-fiscal-quarter earnings funk continued. Most notably, a downgrade from Barclays, and lower projected PC sales from research firms IDC and Gartner amid forex headwinds, continue to outweigh its dividend hike and spinoff plans.

So what: For investors, the company was hit with bad news in the middle of the month. First, IDC predicted that computer shipments would decline 4.9% this year. That's a poorer market forecast than its previous prediction of a 3.3% loss. Meanwhile, chipmaker Intel cut its revenue forecast amid a strengthening dollar providing headwinds to foreign market transactions.

Barclays promptly downgraded HP from overweight to equal weight the day of IDC's report, citing currency headwinds as a factor. Later in the month, research firm Gartner estimated the traditional PC market -- the bulk of the PC market -- would contract by an astonishing 8.7%. On a positive note for investors, the company increased its dividend by 10%, and appears to be moving forward on the planned split without any issues

Now what: Hewlett-Packard has some definite headwinds as far as the company is concerned. After years of poor management, the company hired CEO Meg Whitman in an attempt to turn around the ship. While Whitman has done a good job refocusing the company and promising a turnaround, an actual financial turnaround hasn't occurred.

After two huge writedowns in a little more than a year of her taking over as CEO, a split of its enterprise and personal PC businesses, and continued dividend hikes, investors are still waiting for substantive organic growth, but the company has failed to deliver even after running up more than 100% since 2013. Management appears to be confusing motion with progress.

Eventually, the company will need to provide investors with performance instead of returned capital and promises. Fellow Fool Anders Bylund recently wrote about the biggest issues HP faces going forward, and the problems are larger than currency concerns. I'm willing to watch this tech giant from the sidelines.