Shareholders of Pfizer (NYSE:PFE) are no doubt pleased with 2015 so far. The big pharma stock is up 12% year-to-date, easily beating the performance of the S&P 500 index. Even so, some Pfizer investors just might be kicking themselves right now. To understand why, we need to look back a few years.

Spin moves
Pfizer announced plans in mid-2012 to spin off its animal health business via an initial public offering. On January 31, 2013, those plans became a reality with the IPO of Zoetis (NYSE:ZTS). At the time, Pfizer retained ownership of over 80% of the new company.

However, just four months later, the drugmaker decided that it would completely spin off Zoetis. Pfizer shareholders were offered an opportunity to swap Pfizer stock for Zoetis stock at a 7% discount. The official exchange offer was made in June -- and the results weren't surprising.

Hindsight is 20/20
For over a year, those investors who chose to stick with their Pfizer shares were glad they did. Shares of the parent company handily beat those of the spin-off. But then something happened. 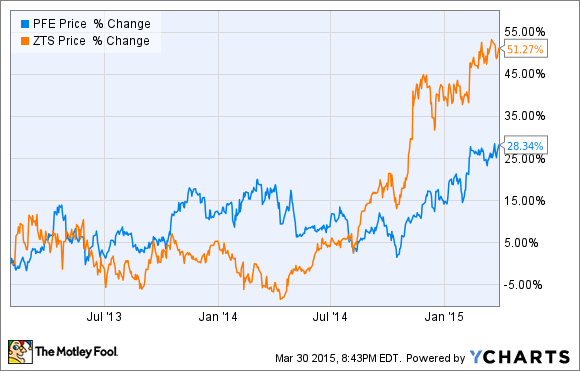 Beginning in May 2014, Zoetis' stock performance blew past Pfizer's. At the time, Pfizer was involved in a melodrama over a potential buyout of AstraZeneca (NYSE:AZN) that ultimately fell through. Pfizer also experienced a decline in earnings; lower sales from Lipitor and Viagra as a result of losing patent exclusivity hurt, as did a decrease in revenue from several other drugs in the company's lineup.

Meanwhile, Zoetis posted solid year-over-year earnings gains. The company saw higher demand for its premium livestock products and enjoyed successful launches of several new products. The net result: Zoetis shares are now up over 50% since the IPO in 2013, while Pfizer shares have increased by 28%. Investors opting to keep their Pfizer stock instead of swapping for Zoetis shares probably aren't as happy with their decision in hindsight.

Best pick now
It's important to keep in mind that the market offers investors the ability to swap out shares of Pfizer and Zoetis any time they'd like. Simply sell one stock and buy the other. But is that still a good choice?

If you're most interested in steady dividend payments, Pfizer is probably the better pick. The big pharmaceutical company's forward dividend yield currently stands at 3.2% compared to Zoetis' relatively paltry 0.70%. However, Zoetis appears to have more room to increase its dividend in the future, with a payout ratio of only 25% versus 73% for Pfizer.

Zoetis also looks to have better growth prospects. The company should benefit from several macro trends, including higher consumption of meat in developing nations and increased pet ownership. Pfizer, unfortunately, must still contend with the effects of its patent cliff.

If I had to pick just one, I'd go with Zoetis. However, investors don't have to just pick one. You can get steady dividends with Pfizer and good growth prospects with Zoetis. There's no need to kick yourself at all.