Without a doubt, the robotics industry represents one of the most intriguing opportunities for investors to capitalize on cutting-edge technology. The outlook for the robotics industry is strong due to the increasing emphasis on automation within everything from manufacturing to the medical field. What's more, thorough analysis can identify the stocks that are capable of leading the pack. While we don’t have a crystal ball, we are equipped with the knowledge that companies with strong management and great operations typically perform well over the long term.

With so many separate visions of what robots can accomplish, investors need to focus on companies that have not only adequate resources for research and development, but also the production know-how to bring their creations to fruition, solve real-life problems, and create shareholder value in the process.

In my opinion, then, here are the three best stocks for investing in robots today.

First is iRobot, which is best known for its Roomba line of robotic vacuums. And that's fair enough; Roomba has historically generated more than 80% of iRobot's annual revenue, with other home robots comprising the remainder of the home segment, including its Braava floor-sweeping bots, Scooba floor-scrubbing models, and Mirra and Looj robots for cleaning pools and gutters, respectively. When all is said and done this year, iRobot expects Roomba to lead the way for Home Robot sales to grow in the range of 12% to 13% in the U.S., led by strong demand from the U.S. and China, and "significant growth" despite recent macroeconomic pressure in several European markets. 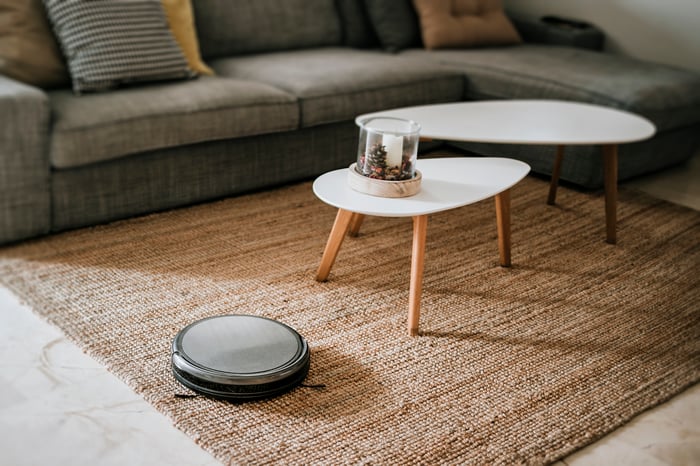 That said, iRobot also raised eyebrows last quarter by selling its smaller Defense and Security segment in a deal worth up to $45 million (including a $15 million milestone-based contingent payment), which was poised to return to modest growth this year for the first time since 2011 when it began to suffer from unpredictable government spending. iRobot used the proceeds from the sale to help fund an accelerated $85 million stock-repurchase transaction shortly thereafter. And now free of this segment, iRobot can more effectively focus on seizing what it views as the more compelling growth opportunity in home robots.

Speaking of which, perhaps most important in these early stages is that iRobot regularly aims to invest 12% of its annual revenue on R&D. Based on iRobot's current guidance for 2016 revenue of $630 million to $642 million, this means iRobot will spend as much as $77 million this year on advancing robotics technology. To be sure, starting with the September launch of iRobot's smart new Roomba 980 vacuum, the company began to fulfill its earlier promise to monetize investments in new technologies such as visual navigation, secure tablet interfaces, and cloud integration to bolster robots' mapping and object manipulation abilities. In addition, iRobot recently provided new details on its early stage efforts to build a robotic lawn mower, with which it hopes to open the (patio) door to a new multibillion-dollar revenue opportunity.

I don't know about you, but I look forward to continuing to hold my shares of iRobot as each of these new developments rolls out in the coming years.

Next, it's no mystery that Alphabet's ambitions extend beyond the scope of its Google Internet search engine. But in late 2013, the company used its massive cash hoard to acquire eight robotics companies in less than six months. Those companies ranged from Schaft and Boston Dynamics, both of which make incredible balancing humanoid robots, to truck-loading robot specialist Industrial Perception, and robotic-arm maker Redwood Robotics. All of these disparate robotics companies were effectively combined into a group dubbed Replicant.

And though Alphabet subsequently acknowledged that these purchases are for one of its "moonshot" initiatives within its X segment -- more specifically, a vision for creating next-gen robots to automate package delivery from the company's incredible self-driving cars under its secretive X division -- recent reports indicate the company has dissolved Replicant and put Boston Dynamics up for sale after considering its direction and lack of a clear path toward profitability.

To be fair, in a New York Times interview shortly after the acquisitions, now-former Google executive and lead engineer Andy Rubin stated: "Like any moonshot, you have to think of time as a factor. We need enough runway and a 10-year vision." So it might seem surprising at first that Alphabet would dismantle the group. But that doesn't mean Alphabet is done with robotics completely.

According to a recent report [subscription required] from The Wall Street Journal, X chief Astro Teller has stated former Replicant employees are now striving to "re-purpose their robotics work into new projects," and have been told to "prioritize the problems they are trying to solve over developing specific technology." As one X spokesperson put it, Alphabet's robotics effort is about "defining some specific real-world problems in which robotics could help."

In the meantime, investors can take solace knowing Alphabet rakes in boatloads of cash thanks both to its status as the undisputed Internet search leader in most parts of the world, as well as its recent progress monetizing burgeoning platforms like mobile search and YouTube.

Intuitive struggled in late 2014 with slow sales of its da Vinci robot systems, as hospitals tightened their purse strings amid the implementation of the Affordable Care Act. And procedure counts -- from which Intuitive benefits through the sales of related surgical instruments -- were also under pressure domestically from a modest decline in core procedures like benign hysterectomies.

That said -- and keeping in mind these high-priced systems often require long sales cycles for placement -- Intuitive Surgical has enjoyed accelerating demand for its new da Vinci Xi platform. The da Vinci Xi first received FDA clearance in the U.S. in early 2014, followed by a CE Mark the following June to make it available in Europe (and any other countries that require CE Mark compliance).

Fast-forward to April, 2016, however, and Intuitive Surgical pleasantly surprised investors by confirming it shipped an impressive 110 new systems in the first quarter of 2016, up from 99 in the year-ago period. And surgeons are using their systems more often; the number of procedures performed last quarter grew by a solid 17% year over year, causing the company to increase its 2016 guidance for procedure growth of 12% to 14%, up from their previous outlook for 9% to 12% growth.

What's more, Intuitive Surgical has a history of generating healthy cash flow from operations and opportunistically repurchasing shares. In 2015, the company spent roughly $184 million to repurchase and retire shares under its $1 billion share-repurchase program authorized last February. Though no shares were repurchased in Q1 of this year, management also made it clear buybacks are just one tool they can use to create shareholder value. And the company has the funds to do so, ending last quarter the with no debt and $3.8 billion in cash on its balance sheet.

In the end, as Intuitive Surgical's long-term thesis plays out, that's why I'm still convinced patient investors in this robotics stock stand to be handsomely rewarded.