Sales at Lumber Liquidators plummeted in the wake of a 60 Minutes report questioning the health risks associated with its flooring products. Photo: Wikimedia Commons.

We knew it was going to be bad, but the business update Lumber Liquidators (NYSE:LL) provided last week shows just how devastating the controversial 60 Minutes report on alleged health risks associated with its flooring turned out to be. Yet as bad as it was, it could've been a lot worse, suggesting the company may be able to recover sooner than anticipated.

Falling through the floor
Net sales tumbled almost 13% in March, but comparable store sales -- those made at locations open for more than a year -- plunged 18% from the year ago period. Though the fallout eased up as the month wore on, investors should expect more of the ill effects to linger.

But it could have been worse. While the quarter started off strong for Lumber Liquidators, with net sales in January and February rising almost 19% and comparable sales nearly 10% higher, the damaging effects of the report had management expecting same store sales to plunge for the full quarter, coming in anywhere from down 4.4% to a 0.5% gain.

In the end, they were only off 1.8% in the quarter, no doubt helped by Lumber Liquidators' strong, albeit delayed, response to the crisis.

Nailing the key points
In that response, management ripped the testing methodology used by 60 Minutes, noting that the deconstructive method that separates and measures all of the component parts of the flooring not only isn't what regulatory testing methods require, but also fundamentally alters the nature of the product.

Instead, Lumber Liquidators tests (as regulations call for) how a product is found and used in the home. And Lumber Liquidators got a big boost when the Consumer Product Safety Commission said it was investigating the allegations against the flooring specialist and that it, too, would be testing samples based on in-home usage.

Although not a guarantee, that should work to Lumber Liquidators' benefit, even if its financial performance straggles on. The flooring specialist said it expects its first-quarter gross margin to fall to a range of 35.5% to 36.5% from 41.1% a year ago due to shifts in product mix, having to discount prices, and changes made to its marketing to highlight what a value its products are. 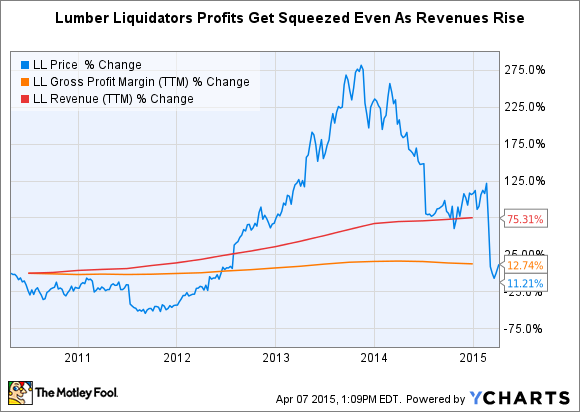 Polishing its reputation again
The stock of Lumber Liquidators has bounced 25% off the lows it hit in the days following the report, but it's still trading more than a third below where it was before the piece aired.

And the flooring specialist had been suffering from weaker performance even before then, with its fourth quarter results recording yet another lackluster showing. Its stock is actually down by more than 64% from its 52-week high, and had been well below those high-flying numbers even before 60 Minutes had its say.

So investors shouldn't expect more from the CPSC investigation than vindication that Lumber Liquidators' flooring is safe. And there remain some troubling components of the news program that have yet to be clarified.

For example, Lumber Liquidators suppliers are shown stating that the products they're shipping to Lumber Liquidators are knowingly not CARB-compliant (i.e. are not meeting the standards they're supposed to) and are being labeled as such regardless. Is that evidence of criminality, artful editing, or a misunderstanding? That still needs to be sorted out.

The worst of the report seems to be behind Lumber Liquidators, and the fall off in business is easing. That doesn't mean it's improving either, and with the CPSC report still to come months in the future, this is an investment that's likely dead wood for the immediate future.