Please ensure Javascript is enabled for purposes of website accessibility
Log In Help Join The Motley Fool
Free Article Join Over 1 Million Premium Members And Get More In-Depth Stock Guidance and Research
By Daniel Sparks - Apr 8, 2015 at 7:25AM

Tesla just upped the ante, making the value proposition for electric cars more compelling than ever.

Since the launch of its Roadster in 2008, Tesla Motors (TSLA 4.53%) has challenged the notion that fully electric cars are confined to city limits and handicapped to short driving distances. The Roadster was the first all-electric production automobile to travel more than 200 miles on a single charge. About 70,000 cars later, Tesla continues to step up its game in its efforts to show just how feasible electric cars can be for traveling long distances. Today, Tesla, makes its latest move, saying goodbye to its lowest-range 60 kilowatt-hour powered Model S sedan and achieving a new minimum fully electric driving standard with its formidable replacement: the new 70D.

At $75,000 before any tax credits, the new entry-level Model S has 240 miles of EPA-rated range and now comes standard with dual-motor all-wheel drive. And access to Tesla's Supercharging network for long-distance travel, which used to cost $2,000 for those ordering the 60 kWh Model S, now comes standard with every Tesla order.

The 70D's performance leaves the 60 in the dust and even challenges the specs of Tesla's previous 85D (along with the introduction of 70D, the 85D motor was updated today), which gets 270 miles of EPA-rated range. 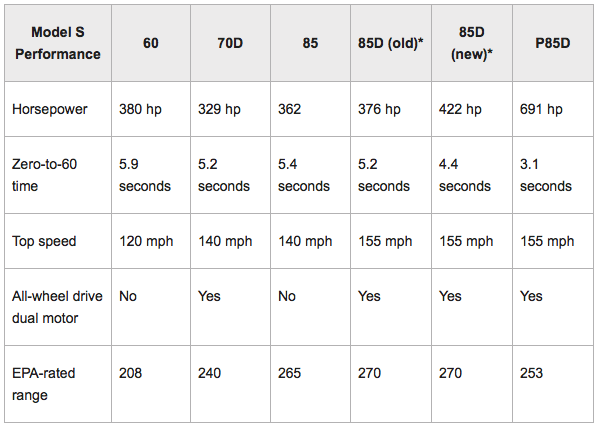 Further, with the launch of the 70D Model S, the unlimited-mile 8-year warranty on the battery and drive unit that used to be reserved for only 85 kWh versions of Model S is now included with every Model S. The previous entry-level battery and motor warranty for Tesla's 60 Model S was eight years or 125,000 miles -- whichever came first.Of course the performance of the 70D still lags well behind Tesla's performance version of its 85 kWh dual-motor Model S, or the P85D. The P85D has total front and rear horsepower of 691, a top speed of 155, and a zero-to-60 time of 3.2 seconds.

Other features standard on the 70D worth noting include:

With the 70D, Tesla has undoubtedly upped the ante for its entry-level Model S. The value proposition for Model S is better than ever.

Editor's note: A previous version of this article was based on early information and stated incorrect horsepower for the 70D Model S. The zero-to-60 time is unchanged.