Business development companies have become a go-to source for high-dividend yields on the stock market today. Required to pay out more than 90% of their earnings to shareholders, BDC stocks often have dividend yields bordering on double digits.

Over the long run, though, it's not all about the dividend. Total returns (income and capital gains) are what really matter. Here are three of the best BDCs to invest in, and some of the traits that make them attractive over the long haul.

1. The industry's bellwether
Ares Capital (NASDAQ:ARCC) is to business development companies what Goldman Sachs is to investment banking. Launched in 2004, it's proven to be an excellent underwriter over a full market cycle, surviving and thriving during and after the financial crisis put many BDCs on their deathbeds.

Its historical underwriting performance has given it a few advantages on its peers. First, its excellent record enables it to borrow less expensively than other BDCs, paying 0.25-1.5 percentage points less in interest on its short- to long-term debt than its peers. Secondly, it's proven that it can generate current income and capital gains over a full market cycle, combining the best of both worlds: fat dividends and capital appreciation. 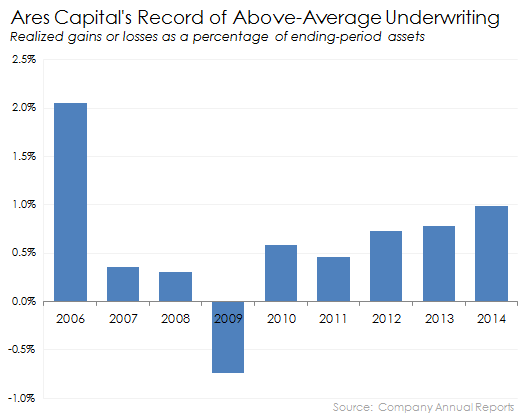 In addition, its manager, Ares Management, is one of the biggest players in private finance, which gives it a perspective into the marketplace that other, smaller BDCs simply don't have. When you see more deals, you can reject more deals, and ultimately build a better portfolio because of it.

So, what's Ares Capital's advantage? It's a unique combination of scale, insight into its core market, and an underwriting record worthy of envy.

2. Tiny twins
I group Main Street Capital (NYSE:MAIN) and Triangle Capital (NYSE: TCAP) together because they're very similar. First, both started as "lower middle market" investors, investing in the smallest of private companies where returns have historically been higher. Secondly, both are notoriously frugal, keeping operating expenses low as a percentage of their total investment portfolios.

A low-cost operating model affords a massive inherent advantage: You can make more mistakes or take smaller risks and still come out with the same returns as other BDCs over the long haul. The difference should not be understated -- Main Street and Triangle Capital keep their expenses to half the level of higher-cost BDCs in the market today.

Finally, it's my belief that Main Street Capital and Triangle Capital have some of the best balance between the often-competing interests of shareholders and managers. Their management teams own a significant portion of their publicly traded stock, and thus have a vested interest in the success of their firms beyond their annual compensation.

Thanks to low costs, this duo can produce industry-beating returns even with industry-average underwriting skill. Thanks to their high insider ownership, investors can feel confident that the management team approaches each investment decision as if they were putting their own money at risk, because they are.

In an industry where egregious management compensation often holds down long-term returns for investors, Main Street and Triangle Capital are a breath of fresh air. If that were to change, you'd have to revisit the investment thesis, but history offers evidence that expense control is core to their operating model, which should bode well for their investors over time.