What's a high-quality CEO worth to a restaurant business? Judging by their compensation packages, the answer to that question is "tens of millions of dollars per year."

Here's a rundown of the highest paid CEOs in the restaurant industry:

Source: Company financial filings. Total annual compensation includes stock awards. Figures are from the 2014 fiscal year except for Panera's and Wendy's, which are for 2013. McDonald's new CEO hasn't yet earned a full fiscal-year salary, but former CEO Don Thompson's compensation is listed for reference.

Second from the top of the list is Starbucks CEO Howard Schultz. He has 30 years of experience with the coffee giant, and a passion for the business he founded that can't be replicated. Besides being critical to its early growth, one of Schultz's biggest contributions to the business was reassuming the CEO spot in 2008. From that perch he guided Starbucks through its hardest operating environment.

Things have improved dramatically for the business in the last few years. Profits are up 50% just since 2012, annual sales have jumped from $13 billion to $19 billion, and Starbucks' return on invested capital is approaching a whopping 30%. The stock has tripled in the last five years.

To keep his interests right in line with those of shareholders, Starbucks' board of directors pegged 80% of Schultz's compensation to long-term incentives. These include annual performance targets and stock options that take years to vest. The idea is that Schultz doesn't earns higher pay unless the business, and the stock, outperforms its peers.

How Steve Ells earns $29 million a year
According to Chipotle's board of directors, Ells' vision -- that fast food can be made from fresh, high-quality ingredients while still being served cheaply -- is primarily what makes him so valuable to the company he founded in 1993. The "food with integrity" concept Ells pioneered has served as the foundation for Chipotle's culture and business strategy, helping it reach a large enough market position to challenge global food giants such as McDonald's.

The business's performance has been phenomenal. In the decade since Chipotle went public, sales have jumped from $600,000 per year to an over $4 billion annual pace. That record blows away all peer restaurants.

Shareholders have been richly rewarded for those gains: $100 invested in Chipotle's stock at IPO would be worth over $1,200 today. 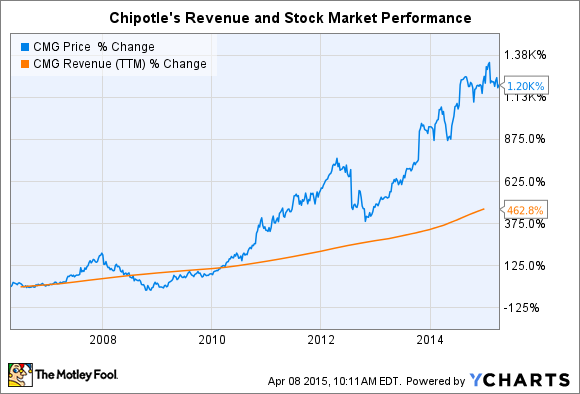 Like Schultz's pay package, Ells' compensation is heavily skewed toward incentives as opposed to salary. Stock option awards made up 83% of his pay last year.

However, shareholders recently voiced concern that Chipotle's board went too far in granting $24 million of stock options to its two co-CEOs last year. As a result, the company has tweaked its payment structure to make for a less lucrative 2015 for these two while spreading stock awards out among other members of Chipotle's executive team.