Brian Stoffel, Sean Williams, and Dan Caplinger
(TMFCheesehead)
Author Bio
Brian Stoffel has been a Fool since 2008, and a financial journalist for The Motley Fool since 2010. He tends to follow the investment strategies of Fool co-founder David Gardner, looking for the most innovative companies driving positive change for the future. He also mixes in risk-management strategies he's learned from Nassim Nicholas Taleb. Follow @TMFStoffel
Follow @TMFStoffel

Executive pay in America has ballooned out of control. Back in the late 1960s, the average CEO made about 25 times the typical working American's salary. But, as you can see below, that figure has exploded over the past four decades. 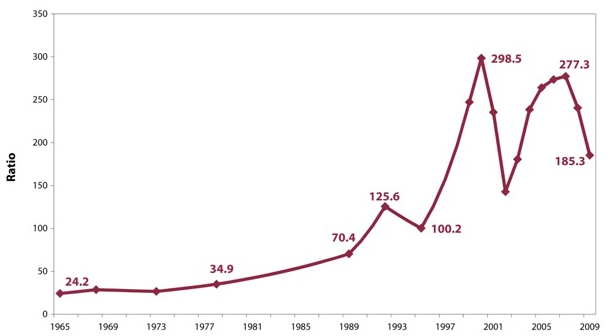 While this may be shocking, it gets even worse. You'll notice that the chart ends in 2009 -- the nadir of the Great Recession. While CEO compensation started to come back to earth during that time, it has once again moved up. According to the AFL-CIO, the ratio now rests above 350.

Compensation that executives receive through options packages has played a big role in this explosion, as the stock market's six-year bull run has helped elevate the value of such compensation packages.

So it might be surprising to some that there are actually CEOs out there that might deserve a raise in their yearly salaries. Below, three of our Foolish analysts argue for why the CEOs of Facebook (NASDAQ:FB), Google (NASDAQ:GOOGL) (NASDAQ:GOOG), and Kinder Morgan (NYSE:KMI) are all pulling in far less than their worth on a yearly basis.

Dan Caplinger: (Mark Zuckerberg, Facebook)
One well-known CEO who follows the common practice in the tech world of taking a $1 annual salary is Facebook's Mark Zuckerberg. Having suffered from a disastrous initial public offering, Zuckerberg had many initial challenges to deal with, and many wrote off Facebook as an overhyped investment mistake. Yet the Facebook executive went about his business of growing the company, making a transition toward monetizing its growing presence on its mobile platform in a way that many of its competitors have struggled to match. The share price eventually responded favorably, and the stock now trades for well over double its IPO price.

To be fair, Zuckerberg has been richly rewarded for his performance, as his roughly 17% stake in the social-media giant has climbed in value to as much as $40 billion during the past month. But continued tough calls like spending what seemed like huge amounts of money for risky acquisitions have started to pay off, and Zuckerberg has developed an uncanny ability to identify promising trends Facebook can profit from. Bringing local businesses further into the social network also has plenty of potential for future gains. Zuckerberg's role in pushing Facebook forward arguably deserves more than a single greenback for compensation, even if he doesn't need the extra cash.

Brian Stoffel (Larry Page, Google)
Much like Dan, I'm choosing a CEO that currently earns $1 per year: Larry Page, co-founder and CEO of Google. Page's route to the C-Suite was an unconventional one. After founding the company with Sergey Brin back in 1998, Page was the self-appointed CEO. After getting pressure from initial funders to find a more experienced leader to take the role, Page agreed to step down and let Eric Schmidt become CEO.

Schmidt held that role for a decade -- a time in which Page was able to mature and learn from Schmidt, all while tweaking exactly what he wanted to do when he returned as the company's leader. Since 2011, Page has been the company's CEO. During that time, revenue has grown 125% to $66 billion, and net income has increased 70% to $14.4 billion.

More importantly, Google has made the transition to a mobile company -- thanks in large part to the ubiquity of the Android operating system. Page has been able to balance focusing on the most important Google properties (search, YouTube, AdSense, Android, Chrome), while still allowing the company to have moonshot projects that could completely change the world.

It's true that Page is still ridiculously rich -- Forbes estimates that he is worth roughly $30 billion -- but that's largely through the Google shares he still holds. While I admire his approach of just earning $1 per year, if anyone in Silicon Valley deserves a raise, it's Page.

Sean Williams: (Richard Kinder, Kinder Morgan)
Sure, the man is already a billionaire, but could we please pay Kinder Morgan CEO more than $1 per year for the work he's doing leading the nation's premium midstream company?

Since Kinder Morgan went public again in February 2011 (it was taken private in 2007), inclusive of dividends paid, it's returned 58% to investors. Although that return may sound tame, since February 2011 West Texas Intermediate crude oil prices are down approximately 45% and natural gas prices are off closer to 10%.

How is Kinder Morgan able to outlast a dip in commodity prices? Simple: Richard Kinder has utilized his company's ability to lock in long-term transport and storage contracts that greatly minimize his company's exposure to current market pricing and guarantees a certain commitment of product is transported on an annual basis. Wall Street and investors love the relatively predictable cash flow that Kinder Morgan provides -- as well as its premium 4.3% dividend yield.

Kinder Morgan has also been a steward of growing by acquisition. In January, even with oil prices temporarily slumping, Richard Kinder and his team orchestrated a $3 billion pipeline and asset deal in the oil-rich Bakken shale.

Now there is a caveat to my suggestion that Richard Kinder be paid more: Kinder announced he's stepping down as CEO in June. However, after paying for his own parking and healthcare premiums, and taking just $1 in compensation each year, I think it's only fair that his board of directors reward Kinder for what's been a job well done.

Will Someone Please Give These 3 CEOs a Raise! @themotleyfool #stocks $GOOGL $FB $KMI $GOOG Next Article
Current