Airline stocks soared in 2013 and 2014, with the AMEX Airline Index more than doubling in that time period, and many individual airline stocks rising even more. 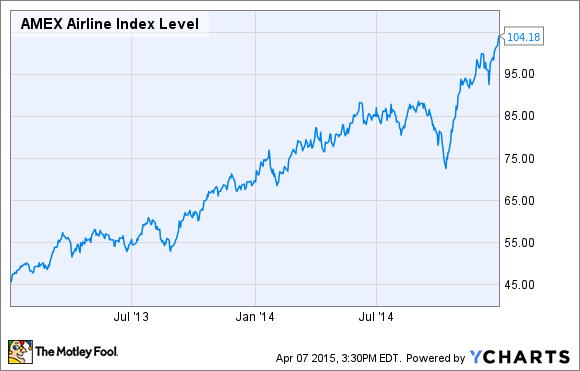 However, most airline stocks have fallen in 2015. This shows the increasing importance of investing in the best airline stocks -- not just any airline stocks. On the other hand, it means there are some good deals to be found in the airline industry.

While there are a handful of good investment opportunities in the sector right now, the three best stocks to invest in airlines appear to be Hawaiian Holdings (NASDAQ:HA), Spirit Airlines (NYSE:SAVE), and Volaris (NYSE:VLRS).

Hawaiian Airlines: Ready for takeoff again
Hawaiian Airlines is one of the stocks that soared in 2013 and 2014 only to come crashing down this year. After peaking at $27.66 in late January, the stock plunged as low as $18.01 in February after the company provided disappointing guidance for Q1. 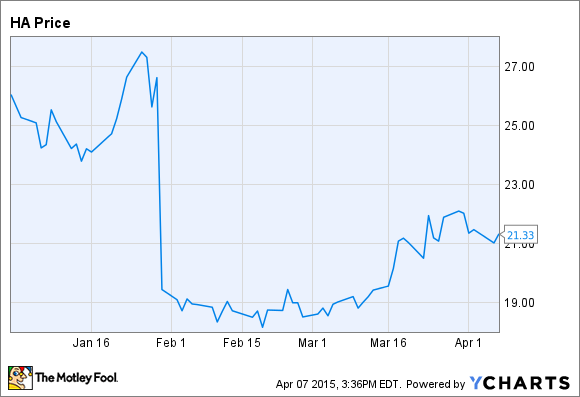 Since then, Hawaiian Holdings stock has regained about a third of the ground it lost earlier this year. But given that Hawaiian's management recently revised its Q1 guidance -- improving its outlook for both revenue and costs -- the stock arguably should have risen even more.

Hawaiian Airlines still faces capacity and currency headwinds in some markets, but it will be in a better position to offset those pressures during the rest of 2015, as demand was at its seasonally weakest point in Q1. Meanwhile, the stock is extremely cheap, trading for just 8 times projected 2015 earnings.

Since Hawaiian Airlines has already hit its publicly stated liquidity target and is on the verge of hitting its leverage target, it could soon announce a plan to return cash to shareholders. This will likely include share buybacks or additional repurchases of convertible debt. These actions would take advantage of Hawaiian's low stock price to reduce the future share count and build value for long-term investors.

Spirit Airlines: Growth continues
Spirit Airlines stock is significantly more expensive than Hawaiian Holdings shares. It currently trades for more than 14 times projected 2015 earnings. But this valuation is still surprisingly low given Spirit's massive growth potential, making this another one of the best stocks to invest in airlines.

Spirit is on pace to increase capacity more than 30% in 2015. While it has experienced some fare pressure -- in February, it projected that Q1 unit revenue would decline 9%-11% year over year -- this has been more than offset by reductions in its (already industry-leading) non-fuel unit costs and lower jet fuel prices.

Clearly, on balance, Spirit is thriving in the current environment. A 20%+ operating margin is virtually unheard of in the airline industry. But with unit costs on pace to fall 17% year over year due to the sharp drop in fuel prices and Spirit's move to larger, more cost-efficient aircraft, this goal is easily attainable.

Lastly, Spirit's growth opportunities remain enormous. Spirit estimates that there are still more than 500 additional markets it could serve while meeting its margin target. Spirit Airlines investors are paying less than the market earnings multiple for a company that could quadruple its revenue and EPS over the next decade. That's quite a bargain!

Volaris: The turnaround is real
Unlike shares of Hawaiian Holdings and Spirit Airlines, Volaris stock has risen more than 30% year to date (as of April 7). However, the stock still sits slightly below its 2013 IPO price of $12. 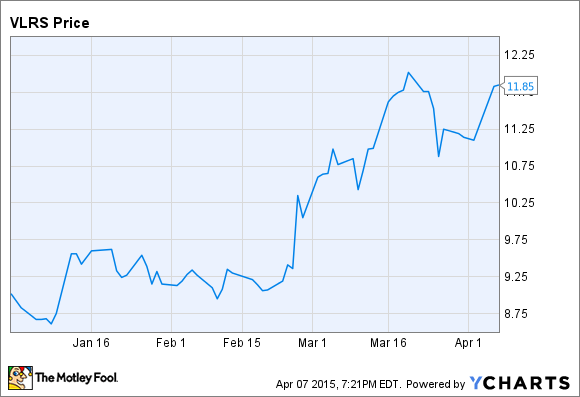 Like Spirit Airlines, Volaris is a bet on the growing demand for low-cost air travel. Volaris has the lowest unit costs not just in its home market of Mexico, but of any airline in the Americas. Its plan to add five seats to each of its A320 aircrafts this year will further reduce unit costs.

Volaris' financial performance deteriorated rapidly around the time of its IPO in late 2013, but it is making a big comeback now. Last quarter, total unit revenue increased more than 20% (as measured in pesos), and its operating margin improved by 17 percentage points year over year.

To keep the momentum going in 2015, Volaris is slowing its domestic growth to a crawl while deploying more capacity to the U.S. market, where demand is stronger. For example, it will begin its first route to New York in July. If oil prices remain low, Volaris' profit margin is likely to rebound to double-digit territory this year, driving the stock higher.

Shares of Hawaiian Holdings, Spirit Airlines, and Volaris are all cheap in the context of their respective growth profiles. However, investors seem to misunderstand -- or undervalue -- their future prospects. As a result, these are arguably the three best stocks to invest in airlines today.