March was not kind to shares of Peabody Energy (OTC:BTU). Then again, neither were the 48 months that preceded it. During this previous month, shares have declined by more than a third, which puts shares of Peabody down more than 90% since the peak of coal prices back in early 2011. 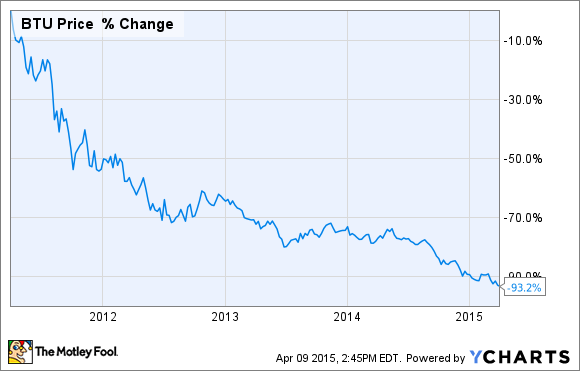 The price of coal has been the largest culprit for Peabody's recent malaise. With natural gas as cheap as it is in the U.S. thanks to shale extraction techniques, there has been continuous pressure on coal prices, keeping them low. Today, the average price for a ton of coal sold in the Powder River Basin -- a region that represents more than two-thirds of Peabody's production -- is currently less than the cash costs at which Peabody can mine coal. However, this month, the company has been hit especially hard, partly due to a recent analyst downgrade, as well as the possibility that the U.S. could alter the way in which it collects royalties on coal mined from federal land.

This royalty payment change would involve applying the royalty fee when coal is sold to an external customer such as a utility or an exporter, and not when it changes hands between operating subsidiaries within a coal company. This is extremely important to Peabody, because the aforementioned Powder River Basin mining operations exist almost exclusively on federal lands. Should these new regulations take place, it could result in much higher royalty fees, and potentially cut into the already razor-thin margins at coal companies.

To say that Peabody is in the best financial shape of its coal-producing peers is like saying that one particular pig wears lipstick better than the others. The entire coal industry has been suffering from cheap prices and the the potential for changes in royalty payments. Peabody's EBITDA to interest expense ratio of 1.83 times looks miserable, but it's not even close to the worst in the space. Peabody doesn't have any major debts due until 2018, so the company is in a slight position to outlast some of its even worse-off peers.

Coal will likely be a major component of energy production for several more years to come, and eventually, a few of the companies in the space will emerge from this downturn. Unfortunately, the headwinds that the entire industry is facing will likely mean it will take a while. Investors in Peabody Energy need to know that a rebound in the coal market appears to still be a long ways off.