What: March wasn't a kind month to oil stocks as the global crude benchmark price dropped double digits. This, along with other news, drove Transocean LTD's (NYSE:RIG) stock lower last month. It ended down 11%, as we see on the following chart: 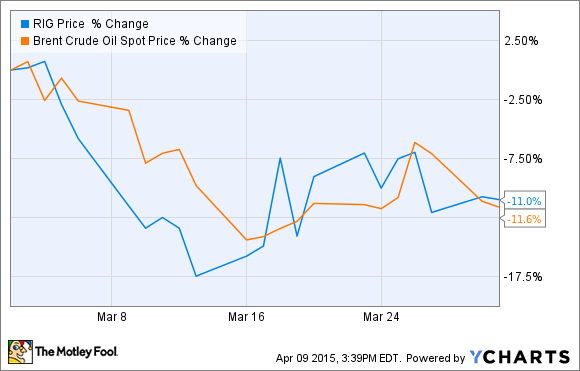 Instead of focusing on weak global oil prices, I'm going to highlight one of the other culprits driving Transocean's March sell-off: rig retirements. The company announced another round of them last month as the weak offshore drilling market left these rigs without work. Instead of paying to have the rigs stacked, the company simply sent its oldest vessels to the scrap heap, booking multi-million-dollar charges to remove these assets from the balance sheet.

So what: When Transocean provided investors with its fleet update in mid-March, the report was nothing but bad news. The company idled another rig, stacked four more, and scrapped another four; it just can't find much work amid the weak oil market. In fact, the only contract it was awarded was to drill a single well for a mere $9 million.

The news that really affected the stock was the fact that the company was retiring four more rigs, bringing the total to 16, with more likely to be scrapped. In fact, two more were scrapped to start April. By tossing four more rigs on the scrap heap, the company will take a $300-$325 million charge in the first quarter.

In a sign of just how quickly things have gone bad for Transocean and the industry, one of the rigs being scrapped, the Deepwater Expedition, had been working at a dayrate of $650,000 per day just last year. Now, the company is hoping to sell it for the meager value of its steel.

Now what: This is probably not the end of the bad news coming out of Transocean unless oil prices meaningfully rebound during the next few months. Transocean still has a lot of older rigs that could be candidates for retirement, so it won't be surprising to see the company announce even more rig retirements in the coming months. These announcements could lead to further sell-offs in the stock.