While the recession hurt the restaurant industry, Americans still love eating out, and sales in 2015 are expected to top $700 billion, up from $586 billion in 2010, according to the National Restaurant Association.

Adjust for inflation and sales this year are expected to increase by 1.5% over 2014. On the surface, that seems good, the sixth consecutive year of growth, but it is below "what would be expected during a normal post-recession period," the NRA wrote.

The food industry is experiencing growing pains, and the market has changed dramatically over the last few years. New players have emerged and longtime leaders like McDonald's have struggled to reach a changing customer base.

Americans are rethinking how they eat, where they eat, and what they eat. There are a number of catalysts for these changes, but there are three that have emerged as megatrends influencing the entire industry. 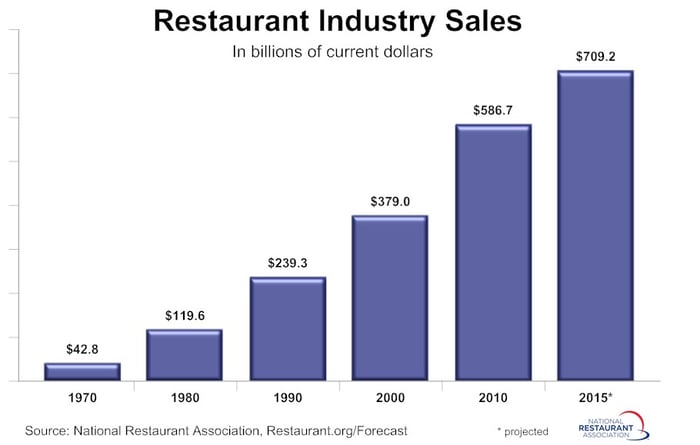 Restaurant owners across all classes of restaurants said that having locally sourced items was important to their customers, according to the NRA 2015 Restaurant Industry Survey. 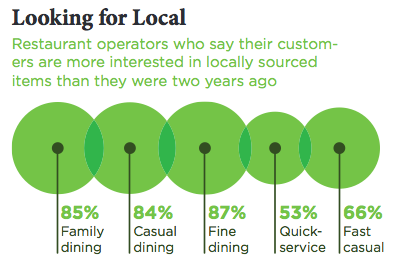 Offering healthy choices
Almost as important to diners as locally sourced food are restaurants having healthy choices to pick from. Over three out of every four households surveyed by the NRA said they were more likely to eat at a restaurant if it offered healthy options. In addition, nearly seven out of 10 people surveyed said they were more likely than they were two years ago to choose meal items that are better for them.

Women, according to the study, are more likely to make healthy choices than men by a fairly significant margin across all the survey questions as you can see on the chart below.

Customers want it their way
Call it the Chipotle effect, but customers expect restaurants to give them their food exactly the way they want it. That does not just apply at fast causal restaurants but at eateries of all classes. People want food that matches their specific health, diet, and other concerns.

RestaurantOwner.com explained how eateries of all kinds have to work to meet these rising customer expectations for flexibility in an article headlined "What Do Customers Want?"

Show the customer that you are flexible and you can work around their diets and tastes. Don't get so tied into "efficiency" that you can't provide substitutions or other choices. Whether it's including a no or low-fat salad dressing in your selection or allowing a customer to have the sauce on the side, it's good business sense to let your customers customize their order, if possible. While meal customization and flexibility can add to the expense of your service, if you need a stronger business rationalization to encourage your servers and kitchen staff to cater to specific tastes and dietary needs, take a longer view.

It is not necessarily about the volume of choices -- it has more to do with being flexible and offering customers what they want within the general parameters of what you serve. However, there are definitely cautionary lessons in offering too many choices. Yum! Brands introduced a new menu at its Pizza Hut chain, dubbed "Flavor of Now," which offered dozens of crusts and other customizable choices for pizzas.

It was a blatant attempt to appeal to the Chipotle crowd, but it may have been too many choices for consumers -- earlier this month, the largest Pizza Hut franchisee, NPC International, reported a 3.5% year-over-year sales decline, reports Entrepreneur.

"While the initial relaunch of the Pizza Hut brand in the U.S. did not deliver the sales lift we expected, consumers have responded positively to the new menu and we intend to leverage this more effectively going forward," CEO Greg Creed stated, acknowledging that this new positioning has not boosted revenue for the chain.

Flavor of Now may have been too much of a good thing. Giving customers choice is one thing, but overwhelming them with too many choices can backfire. Letting customers "have it their way" to paraphrase the old Burger King ads is great if it involves customizing a familiar burger with recognizable toppings, but it can become too much very quickly.

Customers want choice, but they also want familiarity. Sriracha-infused crust may be too much choice. It is about offering people what they want, how they want it.